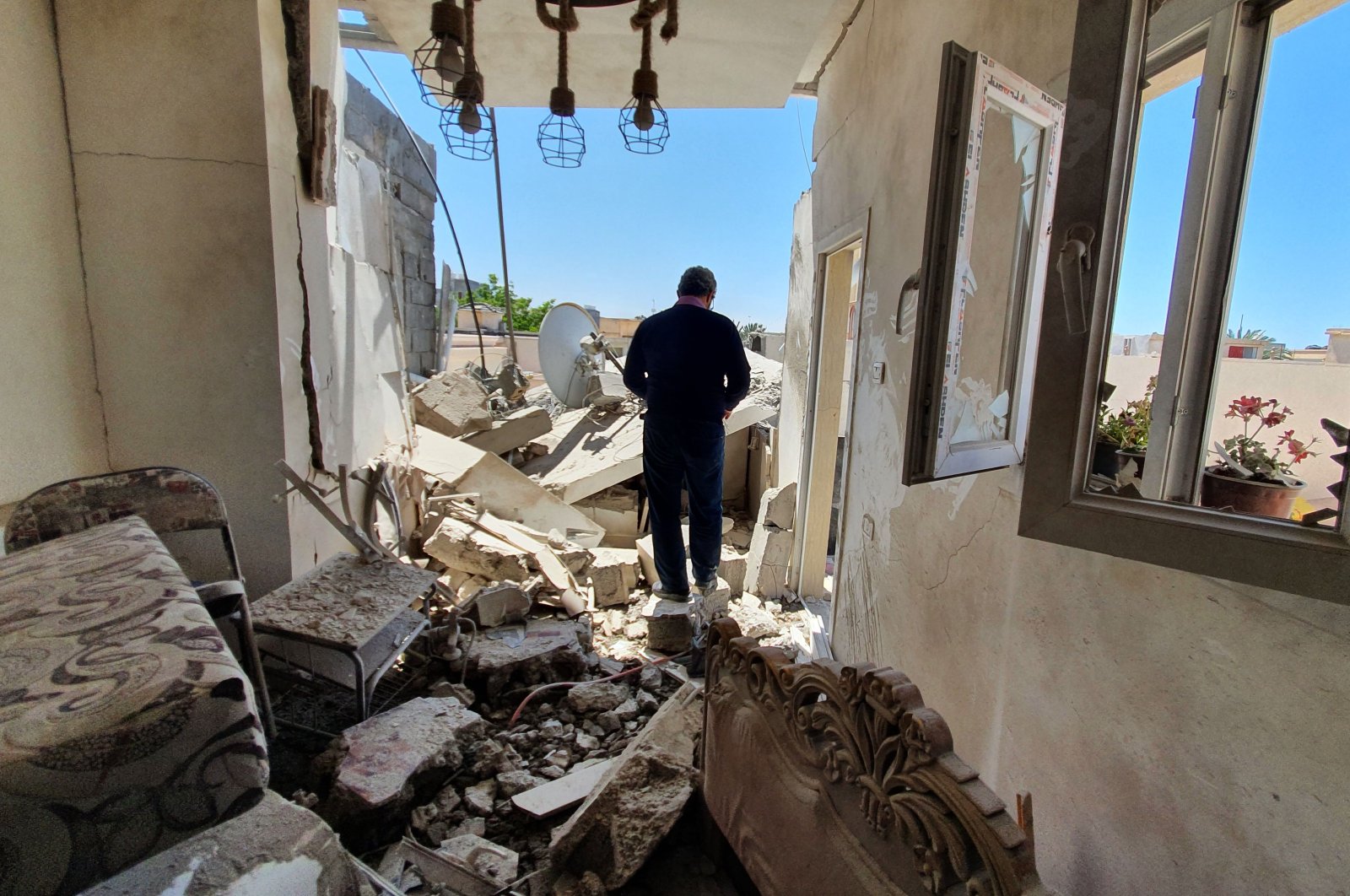 A resident walks amidst the rubble of a building that was damaged when putschist Gen. Khalifa Haftar's forces shelled the residential neighbourhood of Znatah in the Libyan capital Tripoli, held by the U.N.-recognized Government of National Accord (GNA), on May 1, 2020. (AFP Photo)
by DAILY SABAH WITH AA May 05, 2020 11:51 am
Edited By Nurbanu Tanrıkulu Kızıl

Libya's U.N.-recognized government forces have launched an operation to take a key airbase back from putschist Gen. Khalifa Haftar, who recently carried out another coup attempt to take control of the state

A government source, who spoke on condition of anonymity, said heavy artillery by the Libyan army paved the way for forces to launch a ground offensive at the base.

"Clashes are raging on near the base," the source said.

Muhammed Kununu, the military spokesman for the government, said in a statement Tuesday that Libyan government forces carried out an air operation in the Gariyat region about 270 kilometers (167 miles) south of the capital Tripoli and hit a vehicle carrying militias and a supply truck.

No information was given on the number of casualties.

Al-Watiya is regarded as a key airbase in the country and is second only to Mitiga International Airport. It was captured in August 2014 by Haftar, the leader of illegal armed forces in eastern Libya, who used it as his headquarters for western operations.

Meanwhile, the revolutionary council in the Ghat city, located in the Fezzan region near the Algerian border in southwestern Libya, announced that they reject Haftar’s latest coup attempt in the capital.

In a statement, the council said they oppose Haftar’s attempt to overtake the state, adding that they stand beside the legitimate government to establish a civilian and democratic state.

The council continued by noting that a statement recently released by a pro-Haftar group does not represent the city.

Haftar militias had launched an operation in the Fezzan region before their attacks on Tripoli, taking control of some areas, including Sharara and Fil, where vast oil reserves are located.

The military council of Murzuq city also announced Saturday its support for the Libyan U.N.-recognized Government of National Accord (GNA).

The council, located 953 kilometers (592 miles) south of the capital Tripoli, released a statement via video message on Saturday night.

As part of Operation Peace Storm, air operations are being periodically carried out against the base.

Following Haftar’s unilateral declaration, Libya’s Prime Minister Fayez al-Sarraj stated that unilaterally declaring himself the ruler of Libya once again revealed that the warlord's coup project must have ended. A parliament session was organized under the House of Representatives Speaker Hamouda Sayala.

"We reject toying with our country's future like this. We invite all our citizens to unite in preventing our country from falling into a dictator's hands once more and to protect our unity," said a written statement after the meeting.

The statement emphasized that parliament will support all peaceful political initiatives aimed at safeguarding the country's unity.

Haftar’s declaration also drew heavy criticism from the international community as many countries condemned the act that throws away a political solution. Haftar's unilateral declaration of becoming the ruler of Libya is unacceptable and will never provide a sustainable solution for the country, a spokesman for the European Union's foreign policy also said on Tuesday. While the U.S. Embassy in Libya said it “regrets” Haftar’s unilateral proposal to alter Libya’s political structure and urged him to engage in “serious dialogue” about the country’s next steps. Moscow on Tuesday announced that it was surprised by the self-declaration and France, without naming Haftar, stated that the Libyan conflict could not be solved through unilateral decisions but only under U.N.-backed dialogue.

Turkish President Recep Tayyip Erdoğan said in a televised speech on Monday that "good new news from Libya will be returned to us soon, God willing," stressing that "Libya's security, safety and prosperity of its people is the key to stability in the entire North African and Mediterranean region."

Erdoğan said Turkey is determined to continue supporting Libya's legitimate government to transform the area into a region of peace.

He also thanked Turkey for its support for the legitimate government in forcing Haftar to lose ground.