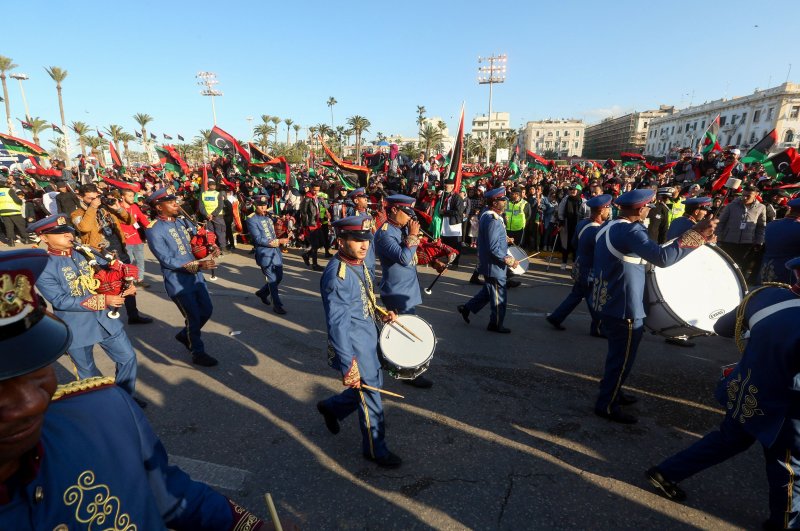 A Libyan marching band performs during a gathering to commemorate the ninth anniversary of the uprising against former Libyan leader Moamer Kadhafi, in the capital Tripoli on February 17, 2020. (AFP Photo)
by Daily Sabah with AA Feb 24, 2020 2:21 pm
RECOMMENDED

Speaking to journalists after a meeting with chiefs of police, Bashaga said Haftar forces have been carrying out assaults on Tripoli for the last 10 months.

Despite this, security forces reduced the rate of crime by creating order within the city, he said.

“We are obliged to protect the lives and properties of all Libyans without any discrimination by using the rule of law. Citizens recently feel that security and stability have been established in the streets of Tripoli,” he added.

Since the ouster of late ruler Moammar Gadhafi in 2011, two seats of power have emerged in Libya: Haftar in eastern Libya supported mainly by Egypt and the United Arab Emirates and the GNA in Tripoli, which enjoys U.N. and international recognition.

In the latest outbreak of fighting, Haftar launched his offensive on Tripoli last April, but after rapid advances, his forces stalled on the edges of the capital.

At a Berlin summit last month, countries including Russia, Turkey, France and Egypt agreed to end foreign interference in Libya and respect a U.N. arms embargo.

Moscow and Ankara together brokered a tenuous truce in Libya last month. The two sides agreed to end fighting, but Haftar's forces have repeatedly violated the cease-fire.

The U.N. envoy to Libya, Ghassan Salame, said Thursday that his mission to secure a lasting cease-fire and eventually a political solution was "very difficult" but "possible."

Libya's legitimate government halted its participation in U.N. talks this week after a barrage of rocket fire by Haftar's forces hit a port in the capital Tripoli.