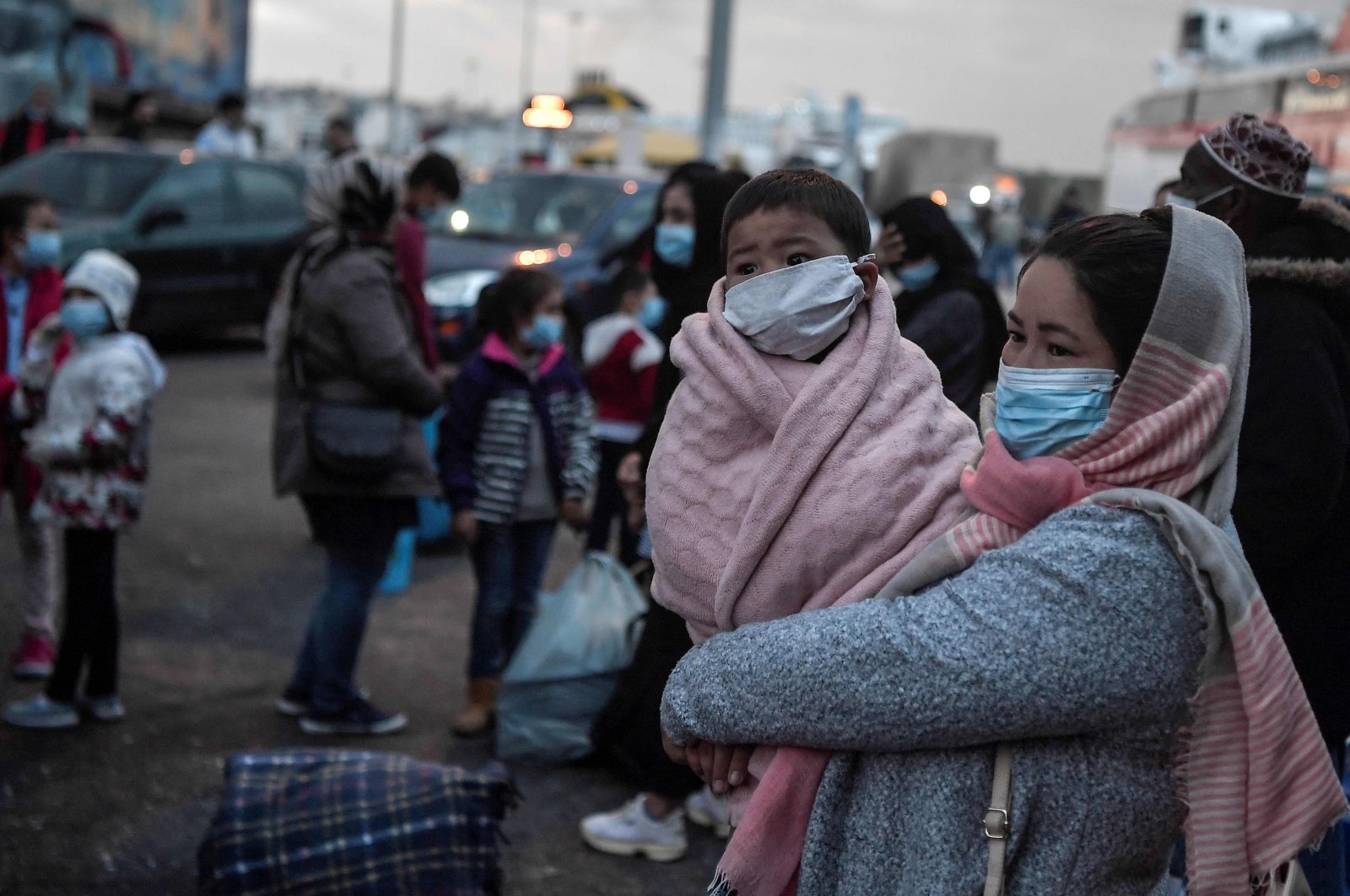 A woman holds her child as migrants transferred from the Moria camp on the island of Lesbos disembark in the port of Piraeus near Athens, May 4, 2020. (AFP Photo)
by compiled from agencies May 11, 2020 11:14 am
Edited By Nurbanu Tanrıkulu Kızıl
RECOMMENDED

Greece will extend to May 21 a coronavirus lockdown imposed since March on migrant camps and which had been expected to be lifted from Monday, the authorities said.

"The coronavirus measures of confinement for those living in migrant camps and in reception centers in Greece are prolonged until May 21," the migration and asylum ministry said in a statement on Sunday, six days after the first easing of the general lockdown in the country

The ministry did not say why the camp lockdown was being extended.

The Greek government adopted a whole series of anti-coronavirus measures in late March but began easing them from Monday last week given the apparent success made in keeping the outbreak in check.

In Greece as a whole, some 2,710 cases of coronavirus have been recorded and 151 deaths.

People can now leave their homes without authorization and on Monday, some shops will open and final-year school pupils will return to class.

Until now, there have been no confirmed coronavirus infections in the Aegean island camps, according to authorities.

On the mainland, however, two camps and a hotel accommodating asylum-seekers were locked down in April after positive coronavirus tests were returned.

According to the UNHCR, the total number of asylum-seekers in Greece is around 120,000.

In April, on the five Greek Aegean islands where many have been housed waiting to be processed, there were 38,291 migrants, down from 42,052 in February, the U.N. body said.

On Sunday, 137 asylum-seekers are expected to be transferred from Lesbos to the mainland.

The Greek government has promised to transfer 2,000 asylum- seekers from the islands to the mainland in order to ease the pressure on the camps there.

Rights groups say this is not enough to produce a real improvement in conditions, especially given the dangers of the coronavirus pandemic.

They also fear that asylum-seeker rights are being eroded by the measures taken to curb the virus's spread but officials insist that Athens will continue to respect its international obligations.

Meanwhile, a group of 50 refugees and asylum-seekers flew from Greece to Britain on Monday to reunite with relatives in a transfer that had been held up by the coronavirus lockdown.

The group includes 16 unaccompanied minors, Greek migration ministry officials said. Some 130 Greek nationals stranded in the U.K. because of the COVID-19 lockdown will be repatriated on the return flight, the ministry said.

Greece hopes to gradually relocate around 1,600 vulnerable persons from its refugee camps to other countries in the coming months.

Monday's group was relocated under the Dublin Treaty, an accord facilitating family reunifications if a close relative is already in the country of destination.

The transfer had been planned for March but was put on hold because of the lockdown introduced to prevent the spread of the coronavirus. In Greece, restrictions were partly eased on May 4.

"Today the lives of the people who are leaving is changing," Deputy Migration Minister Giorgos Koumoutsakos told reporters at Athens airport. "The coronavirus was an additional procedural challenge, but as you can see it was not an obstacle," he said.

The group waved as they boarded the aircraft.

Beth Gardiner-Smith, the CEO of refugee charity Safe Passage International, which supported the initiative, said in a news release: "The British and Greek governments have shown real leadership in reuniting these families despite the travel difficulties."

Hundreds of thousands of migrants and refugees fleeing conflicts and poverty in their countries used Greece as a springboard toward other European countries in 2015 and 2016, when a European Union-brokered accord with Turkey all but halted the flow.

The reunification was also supported by two members of the British House of Lords, Labour peer Lord Alf Dubs and the Earl of Dundee, a Conservative with responsibility for child refugees at the Council of Europe.