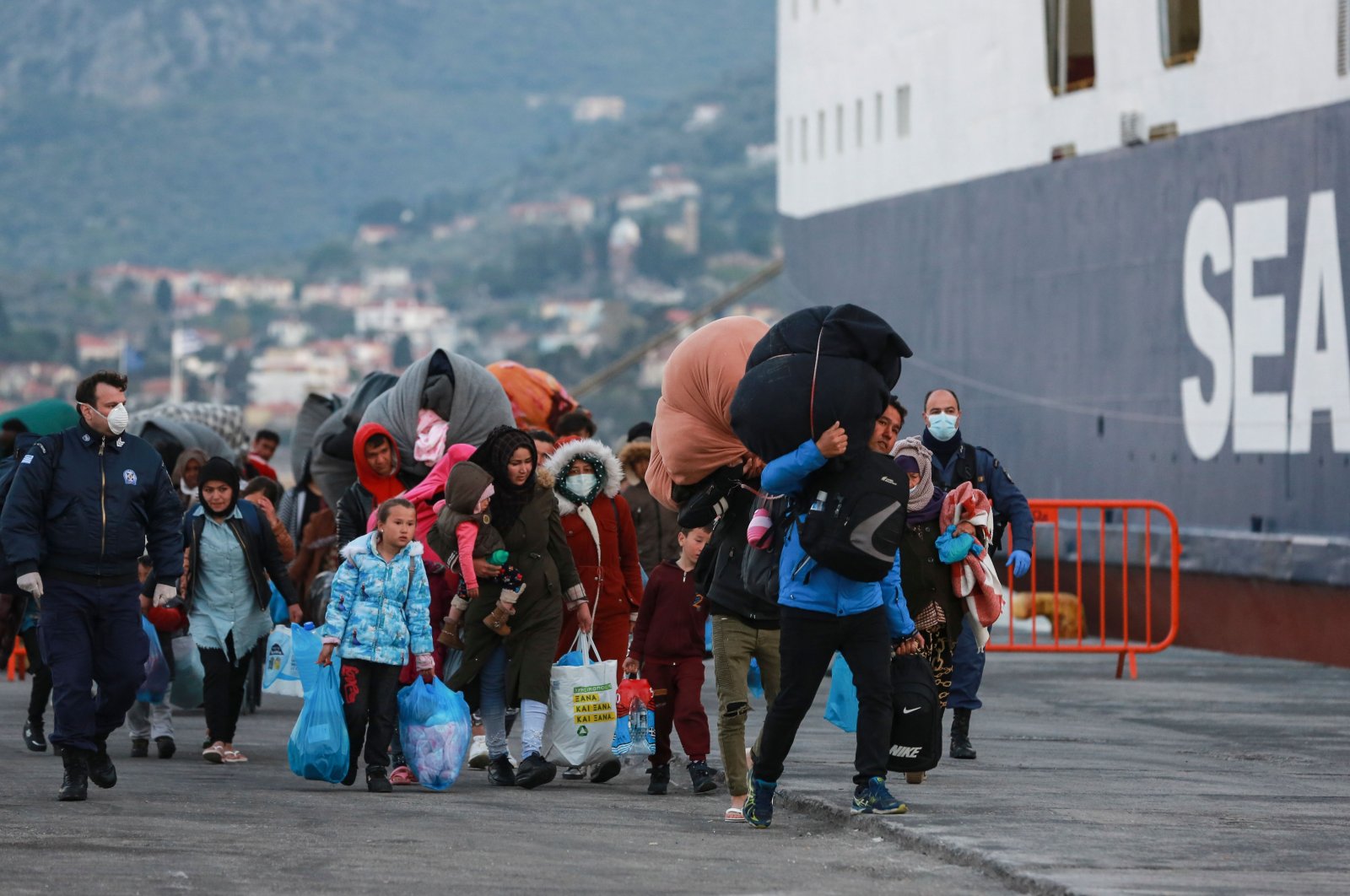 Migrants arrive at the port of Mytilene on the Greek island of Lesbos to be transferred to a closed camp in northern Greece, March 20, 2020. (AFP Photo)
by DAILY SABAH Mar 22, 2020 12:47 pm
Edited By Dilara Aslan

Despite urgent calls by the international community to end the harsh treatment of migrants and grant access to asylum, Greece continues to transport people into closed centers

Greek authorities have denied the right to asylum of at least 625 people on the island of Lesbos and transported many to a closed center, with conditions that are unknown, the Human Rights Watch (HRW) stated Friday.

Underlining that Greek authorities prevent asylum-seekers access to services and plan transfers to mainland detention, the nongovernmental organization urged Greece in a written statement on their webpage to grant asylum.

HRW stressed that “Greek authorities have denied at least 625 people who arrived on the island of Lesbos between March 1 and 18, 2020, the right to seek asylum,” adding that authorities are detaining 189 new arrivals on the island of Lesbos in unacceptable conditions. “The other 436 were transported to a closed center in Malakassa, north of Athens, in conditions that are as yet unknown,” it said.

Ankara last month announced that it would no longer try to stop asylum-seekers and other migrants from reaching Europe, accusing the European Union of failing to keep its part of a 2016 refugee deal.

Thousands of them have since flocked to Turkey's Edirne province – which borders Greece and Bulgaria – to make their way into Europe.

Some try to cross the river to reach Greece, and others have been waiting for the Greek government to open the gates in a buffer zone between Turkey's Pazarkule and Greece's Kastanies border crossings.

The Greek reaction to the migrants has been harsh, including physical attacks and tear gas. Several were even killed by Greek forces on March 1. The Greek government suspended access to asylum for 30 days for people irregularly entering the country. The suspension is a violation of international law, as the Universal Declaration of Human Rights and the EU Charter of Fundamental Rights both guarantee the right to seek asylum.

“For up to two weeks, the authorities have been holding women, men and children – many of them fleeing war and persecution – in the open in cold temperatures, denying their right to seek asylum and preventing them from getting the humanitarian and legal assistance they need and are entitled to,” said Belkis Wille, senior crisis and conflict researcher at HRW. “Greece may be facing challenges on many fronts, from the coronavirus to a surge in arrivals, but it does not mean it can suspend fundamental rights or humane treatment.”

Saying that Greece has the right to control its borders and manage crossings into the country but is bound by the EU Charter of Fundamental Rights, which guarantees the right to seek asylum, the watch highlighted that denying people access to asylum is inhumane and illegal.

“It may violate the fundamental principle of non-refoulment, the prohibition on returning refugees or asylum-seekers to a country where they are liable to face persecution or serious violations of their rights,” it continued.

The authorities have been holding the migrants and asylum-seekers in three locations in northern Lesbos and at Mytilene harbor, and have prevented journalists from speaking with them, the watch explained.

Accordingly, on March 17 the Greek government, as part of its response to the virus, announced that they are planning to transfer those detained and others who arrived on the islands after March 1 to closed facilities on Greece’s mainland. On March 14, a Greek naval vessel transferred 436 migrants to a closed camp in Malakassa, north of Athens, pending their return to Turkey, local media reported.

“Since their arrival, the Greek Coast Guard and police have restricted the movement of new migrants and kept guard over them in de facto detention in inhumane conditions,” HRW said. “One witness saw the group as they arrived on the beach: ‘They were cold and wet, standing together by the road, frightened and holding onto their children,’ he said. The witnesses did not see any toilets, showers or even access to running water.”

Reportedly, a group of 99 migrants, including a girl using a wheelchair and a boy who was unable to walk without support, arrived in other areas of the island and are being held at Mytilene Harbor. The witnesses saw them living in two public transport buses, with minimal hygiene facilities.

Red Cross doctors took each arrival's temperature and asked them about recent bouts of the flu. There has been no information as to their health status.

The migrants are from a wide array of countries in Asia and Africa. Authorities would not provide a breakdown, but officials said on condition of anonymity that the arrivals did not include Iraqis or Syrians.

Turkey’s decision to open the borders came after the international community remained silent in the face of the Bashar Assad regime’s assaults on civilians and civilian settlements. Turkey had frequently voiced that the surge in violence would cause another major refugee wave, which later came true as the Russian-backed regime displaced around 1 million people from northwestern Syria’s Idlib province. Criticizing the lack of international support on sharing the burden, Turkey stated it would not be able to absorb yet another refugee influx, as it already hosts 3.7 million refugees, more than any other country in the world.

Turkish authorities last week announced that since Feb. 27, some 147,132 asylum-seekers and other migrants have crossed to Greece through two control points in Edirne, Turkey's western border, and transits are still underway. Around 10,000 people are still waiting to be taken in by Europe at the Turkish-Greek border under harsh conditions, camping in close areas while Turkish institutions distribute food and medical aid to those people.