Greece fuels tension with Turkey despite attempts to pursue dialogue 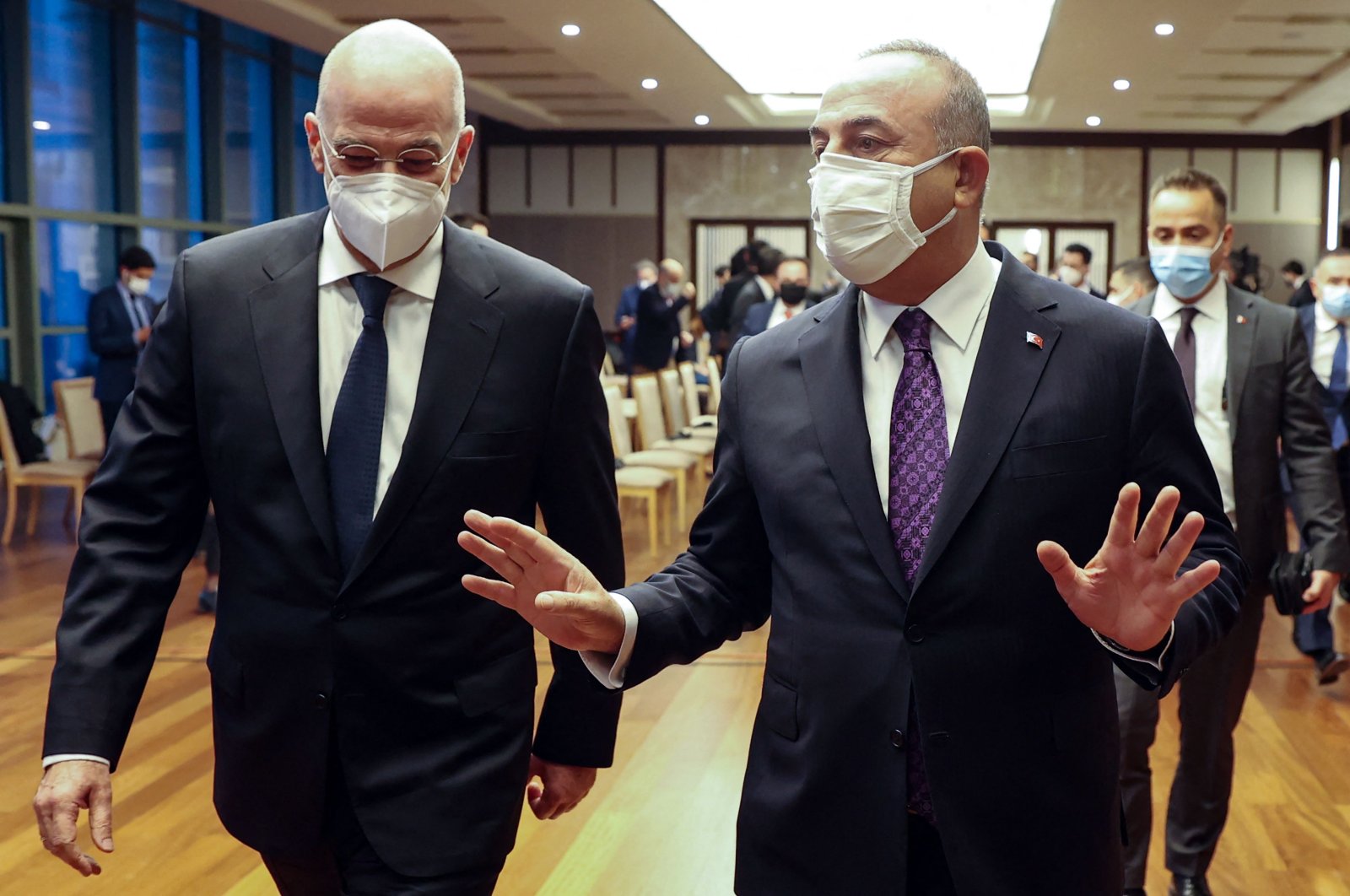 After months of ups and downs in bilateral ties, Turkey and Greece finally managed to have a meeting Thursday on regional issues, particularly the Eastern Mediterranean tensions, raising hopes for improved relations, only to be shattered by the Greek side's provocative stance that makes it harder for both sides to pursue dialogue on a diplomatic level.

Following a meeting in Ankara, foreign ministers of both countries got in front of the camera for a joint press conference. The conference opened with conciliatory remarks from Turkish Foreign Minister Mevlüt Çavuşoğlu in which he praised "the very positive dialogue" they just held in the Turkish capital.

But Greek Foreign Minister Nikos Dendias used his opening remarks to rattle off a series of longstanding complaints about Turkey – from its search for natural gas in the Eastern Mediterranean to its treatment of the Greek Orthodox minority and the sides' ongoing dispute about migrants.

"It is in our interests that minorities in both countries live in peace, it will have a positive impact on our relations," Çavuşoğlu said.

He replied to his Greek counterpart's accusations with regard to alleged violations of sovereignty and remarks over minorities, saying: "Turkey does not violate Greek sovereignty, that is unacceptable."

"Turkey has implemented many inclusive practices with regard to its minorities. Such a positive approach is what we expect from Greece concerning its Turkish Muslim minority in Western Thrace," he said.

He noted that Ankara is capable of protecting the rights of both Turkey and Turkish Cypriots in the Eastern Mediterranean.

"Turkey has continued its activities in the Eastern Mediterranean according to the continental shelf map it has submitted to the (United Nations)," he said.

"In addition, Greece keeps military forces on islands bound to be demilitarized by international law."

Greece's failure in having a constructive dialogue caused a stir in Turkey as many on social media criticized Dendias' uncooperative stance.

In the political realm, the biggest reaction came from Turkey's ruling Justice and Development Party (AK Party) as the party's spokesperson late Thursday criticized Dendias' remarks, saying those who defend lies about Turkey as their own state thesis will find themselves on the wrong side of history.

Releasing a message from his Twitter account, Ömer Çelik said that disrespect and fanaticism are not diplomatic methods. "Disrespect and dialogue cannot come together. Where fanaticism takes place, there will be no diplomacy," he said.

"Those who defend lies produced about Turkey as their own state thesis will find themselves on the tragic side of history. Regardless of who it is, the theses of a state cannot be defended with lies and fanaticism," Çelik said.

"We have often seen those who put their own state in this situation in our nearby region. Those who produce lies about Turkey have no other address, but a dead-end street. We know very well how to fight fanatics," he added.

Çavuşoğlu also announced that they have agreed to meet in Geneva at the end of this month.

"We will continue to work together to improve Turkey-Greece relations," the Turkish foreign minister said, adding that Turkey believes that disputes with Greece can be resolved "through constructive dialogue."

Turkey and Greece have also traded accusations over unauthorized migration. The Turkish coast guard, as well as numerous refugee rights organizations and aid groups, have accused the Greek coast guard of conducting pushbacks – illegal summary deportations – by returning their boats to Turkey without allowing them to apply for asylum in Greece.

Greece, for its part, denies it carries out pushbacks and accuses Turkey of failing to crack down on migrant smugglers operating from its shores.

The dispute with Athens also strained Ankara’s relations with the EU as a whole. Still, Dendias claimed during the conference that Greece has no problem with Turkey's EU membership.

"Greece supports Turkey's (EU) membership, so do the majority of Turks. We are ready to start discussing visa liberalization for Turkish citizens," Dendias expressed, stressing their support for Turkey's membership in the bloc.

Meanwhile, according to Greek daily Ekathimerini, the Greek foreign minister was acting with the full support of Prime Minister Kyriakos Mitsotakis during the unusually frank and heated press conference, as diplomatic sources in Athens have confirmed.

“The foreign minister is in total communication with the prime minister. They had an extensive discussion yesterday, and today after the meeting with Tayyip Erdogan and before the meeting with Mevlut Çavuşoğlu,” the sources said.

They added that, “The Greek side put the emphasis on a positive agenda, which is why it proposed cooperation in the economic sector."