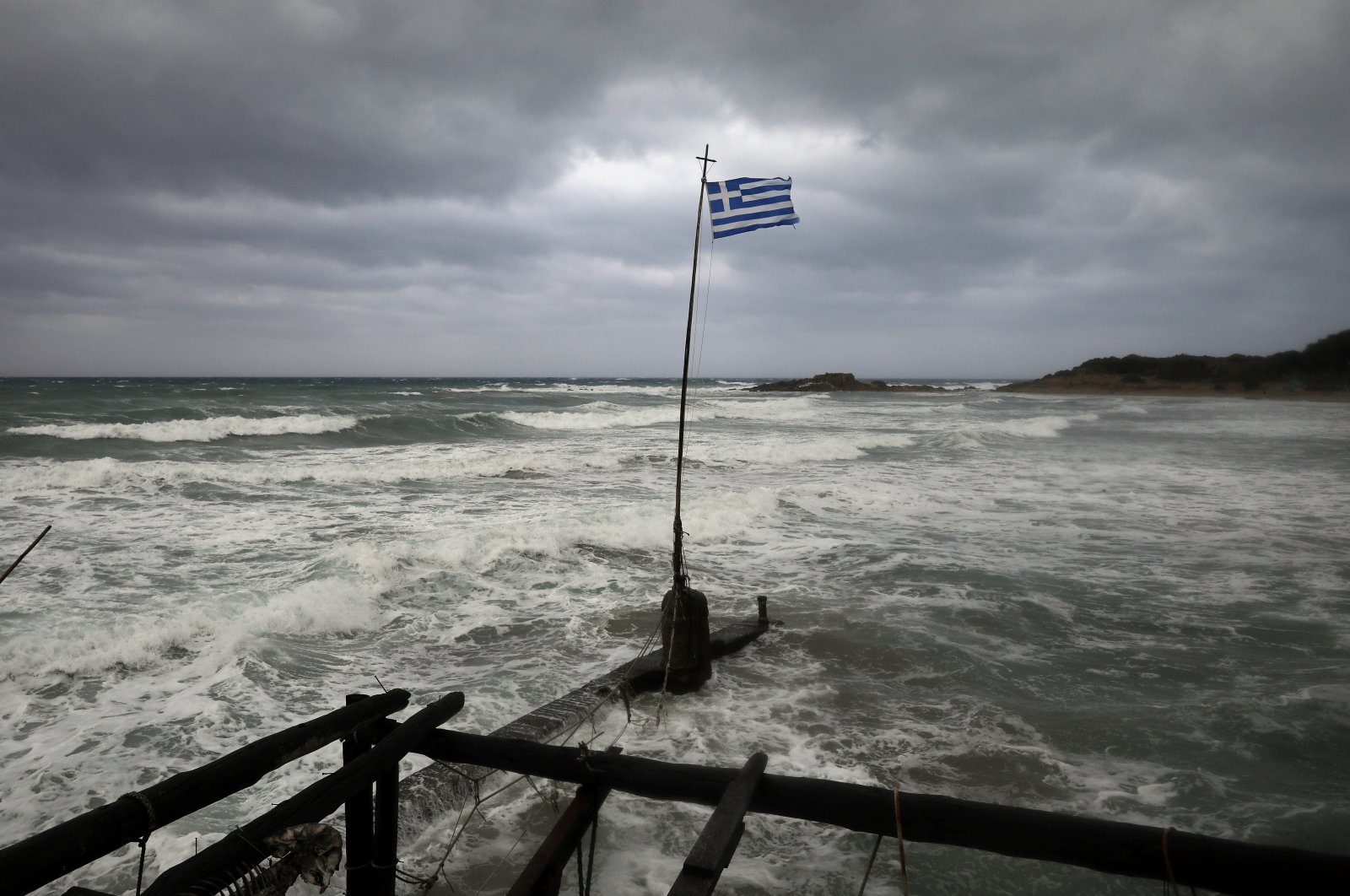 A Greek flag flatters in a beach near the town of Kyllini, as rare storm, known as a Medicane (Mediterranean hurricane), hit western Greece, September 18, 2020. (Reuters Photo)
by DAILY SABAH WITH AA Sep 18, 2020 5:24 pm
RECOMMENDED

Greece pushes the boundaries in the Eastern Mediterranean by claiming that it should have "full authority" without any condition over its maritime borders while international law on the issue proves otherwise, falsifying Greek claims with prior similar examples.

Greece's and Greek Cypriots' selfish acts in terms of ignoring the rights of the other regional states, particularly Turkey and the Turkish Republic of Northern Cyprus (TRNC), has been creating tensions in the Eastern Mediterranean.

Especially the Greek Cypriot administration's moves to act as if they are the sole owners of the island and going on to strike various maritime deals with other states such as Egypt, Lebanon and Israel under that false premise. These deals have been rejected by Turkey since they violate the country's own rights.

Having the longest shoreline, Turkey has been claiming its rights in the region for years, against Greece's expansionist movements in which it claims that it has "full authority" in determining the maritime borders of the Greek islands, most of which are closer to the Turkish coast than to the Greek coast.

While Greece bases these claims on the 121st article of 1982's United Nations Convention on the Law of the Sea (UNCLOS), a deal that Turkey is not a part of, other articles of the law, particularly the 74th and 83rd, state that bilateral maritime border deals are needed between the neighboring countries in determining the maritime borders in order for the borders to be just.

Turkey is aiming for a fair border division, unlike Greece which continues to have a selfish attitude. Turkey states that specific conditions such as the islands' locations and frontages should also be taken into consideration when determining their maritime borders. In order to determine borders that meet these terms, Turkey calls on parties to negotiate without any conditions while a similar enthusiasm for dialogue is lacking on the Greek side.

The previous cases and the courts' decisions over those cases prove that the Greek approach is, in fact, quite "maximalist" and unfair. Probably one of the most significant "unfair" demands of Greece is to have full authority over Kastellorizo (Megisti-Meis) island, which has a survey of 10 square kilometers (3.86 square miles) and is only 2.1 kilometers (1.3 miles) away from the Turkish coast while its distance from the Greek mainland is 582 kilometers.

If Greece has full authority over Kastellorizo, it will be able to interrupt Turkey's coastal projection since Kastellorizo will have a maritime border 4,000 times bigger than its survey, which is about 40,000 square kilometers.

According to the "Sevilla Map," which provides the basis for Greece's absurd claim and was named by a professor from Sevilla University, Turkey has maritime jurisdiction in the Eastern Mediterranean only around Antalya bay, a tiny area.

Although it was confirmed by the European Union itself multiple times before that the map has no official value and was not prepared by the union, the map is often being referred as "EU's maritime borders in the Eastern Mediterranean," and is used by EU-related sources as a basis for Greek claims.

The international court decisions on similar cases, where the island is located across the mainland, show that the court applies additional criteria in determining the jurisdiction of the island. These criteria are mostly the location of the island, its population, geographical size and political and economic conditions. It is also observed that while taking a decision, the courts provide the island with either zero or very limited jurisdiction when the island disrupts the fair sharing of the maritime borders of the mainland.

A similar maritime dispute took place in the 1970s between the U.K. and France.

The Paris administration had put forth that the Channel Islands which are close to the French mainland and belong to the U.K., cannot have a continental shelf bigger than 3 nautical miles (3.45 miles). France has indicated that the U.K. border claims based on the equal distance which take into account the islands, would decrease the French continental shelf to the advantage of the U.K. and that this claim was totally contradictory to the mentioned islands’ size and their coast's length. The U.K., on the other hand, asserted that their size did not matter in determining the maritime borders with France. The continental shelf dispute that pitted the two countries against each other due to the existence of oil fields in the region could only be solved through the court.

The International Court of Arbitration in a 1977 decision, disregarded the island's ruling that the U.K.’s Channel Islands were too close to the French mainland.

Germany, Denmark and the Netherlands applied to the International Court of Justice (ICC) for delimitation in the North Sea. All three countries had a similar length of coastline, yet if the “equidistance” principle – which Greece demands in the Eastern Mediterranean – was applied, Germany would suffer a great loss. Therefore, seeing that Germany's maritime boundaries would be reduced considerably if the equidistance principle is implemented, the court gave Germany an additional maritime zone.

In the Myanmar-Bangladesh example, St. Martin Island right next to Myanmar was the root of the problem. The International Tribunal for the Law of the Sea (ITLOS) entitled the island only to the right of territorial waters by regarding the principle of equity.

In 1992, on the other hand, Canada and France applied to the Court of Arbitration for the French Saint Pierre and Miquelon islands close to the Canadian coast. The court gave France far less than it had demanded.

Again, to determine the continental shelf borders, Nicaragua and Colombia applied to court. The ICC in a 2012 decision, gave Colombia’s islands – which cut Nicaragua’s coast projection – either limited or zero influence by prioritizing the principle of proportionality.

The problem between Spain and Morocco, on the other hand, was solved with Spain giving up on the exclusive economic zone (EEZ) rights of its islands near the Moroccan mainland.