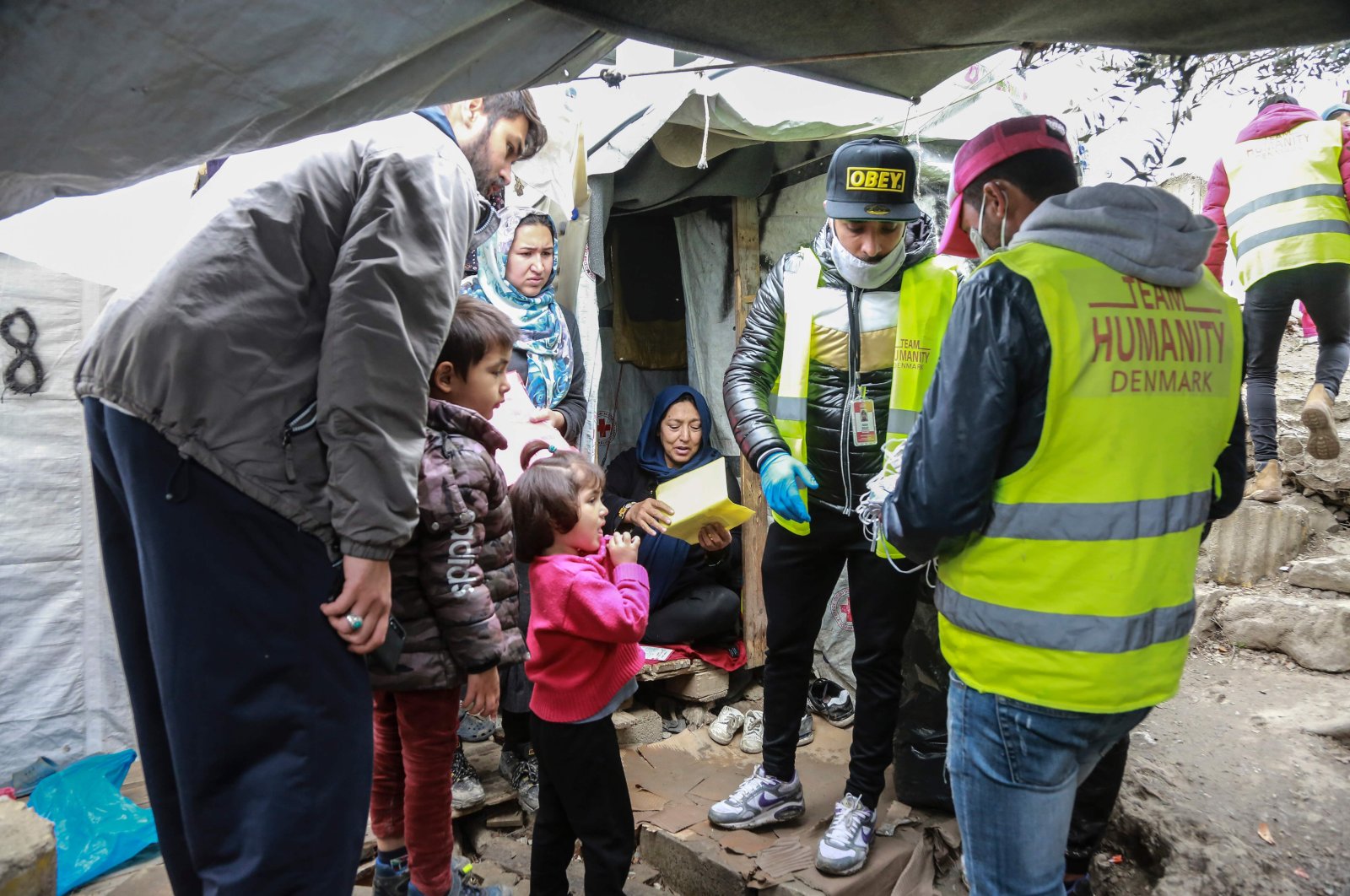 Members of NGO "Team Humanity" shares handmade protective face masks to migrants and refugees in the camp of Moria in the island of Lesbos on March 28, 2020 as as the country is under lockdown to stop the spread of Covid-19 disease caused by the novel coronavirus. (AFP Photo)
by French Press Agency - AFP Mar 29, 2020 11:04 am
Edited By Dilara Aslan
RECOMMENDED

Greece has called for "urgent" EU backing to prepare for a possible coronavirus outbreak in migrant camps, a minister said Friday.

"This sort of case could have dramatic consequences. It is extremely important to act in a timely manner to avert such a possibility," junior migration minister Giorgos Koumoutsakos told EU internal affairs ministers in a teleconference Friday.

"For this reason, we feel it is necessary to have urgent EU backing to address this challenge," Koumoutsakos said, according to his office.

A ministry source clarified that the assistance currently "under discussion" involves emergency funding for medical equipment and sanitation facilities at the camps.

A European Commission spokesperson this week said the bloc was "working with the Greek authorities to assist them in preparing an emergency response plan to deal with a potential outbreak of the coronavirus on the islands."

There have been 28 recorded deaths and 966 officially announced infections from the coronavirus in Greece, which has a population of 11 million.

So far no cases have been reported in the camps, but there are over 36,000 people crammed into overstretched, unsanitary refugee centers on the islands of Lesbos, Samos, Chios, Leros and Kos.

Tens of thousands more are in camps on the mainland.

Koumoutsakos noted that "1,000 migrants and refugees belonging to vulnerable groups" had been recently relocated from island camps to the mainland.

In the camps, regulations have been announced to keep asylum-seekers as distanced from the local population as possible.

The movement of camp residents has been drastically reduced for the next 30 days, with access to nearby communities only allowed to small groups between 7 am and 7 pm, and under police supervision.

On Friday, the ministry said it would open basic supply kiosks inside the camps to further limit outside movement.

Specialized medical teams were being deployed to the camps and virus isolation areas and inspection points would be created.

Camp access to outside visitors is also barred, though aid and rights group representatives are still allowed to enter.

"In recent years, the refugee camps on the Greek Islands have become overcrowded. The corona pandemic that threatens to overwhelm the camps will have catastrophic consequences for the refugees, the Greek inhabitants and the rest of our European society. It is an illusion to think that a COVID-19 outbreak in these camps could be kept under control. 40,000 people are living on a few square kilometres. There is only a handful of doctors present. Many children and adults are already ravaged by physical and mental traumas," the letter said, adding that if Europe looks away now, this situation could escalate to become a medical disaster and this would represent a serious violation of the norms and values of European health care.
"It is our duty to prevent this from happening, for the refugees, for the Greek people who have been in limbo for years, and for Europe as a whole. As doctors, we have sworn an oath promising to provide medical care to all people, irrespective of their personal background. As European doctors, we are obliged to do everything possible to prevent this medical catastrophe," the letter continued.
It reminded also that leaders of the EU also made a promise four years ago that each country would take in a fixed number of refugees from Greece and Turkey. "Not a single EU country has complied with this agreement. It is not enough to move the refugees to camps on the Greek mainland; these camps are also overcrowded. We call on all leaders of the EU to comply with this agreement from 2016 and to take refugees into their countries now to prevent a medical disaster on European territory," it concluded.