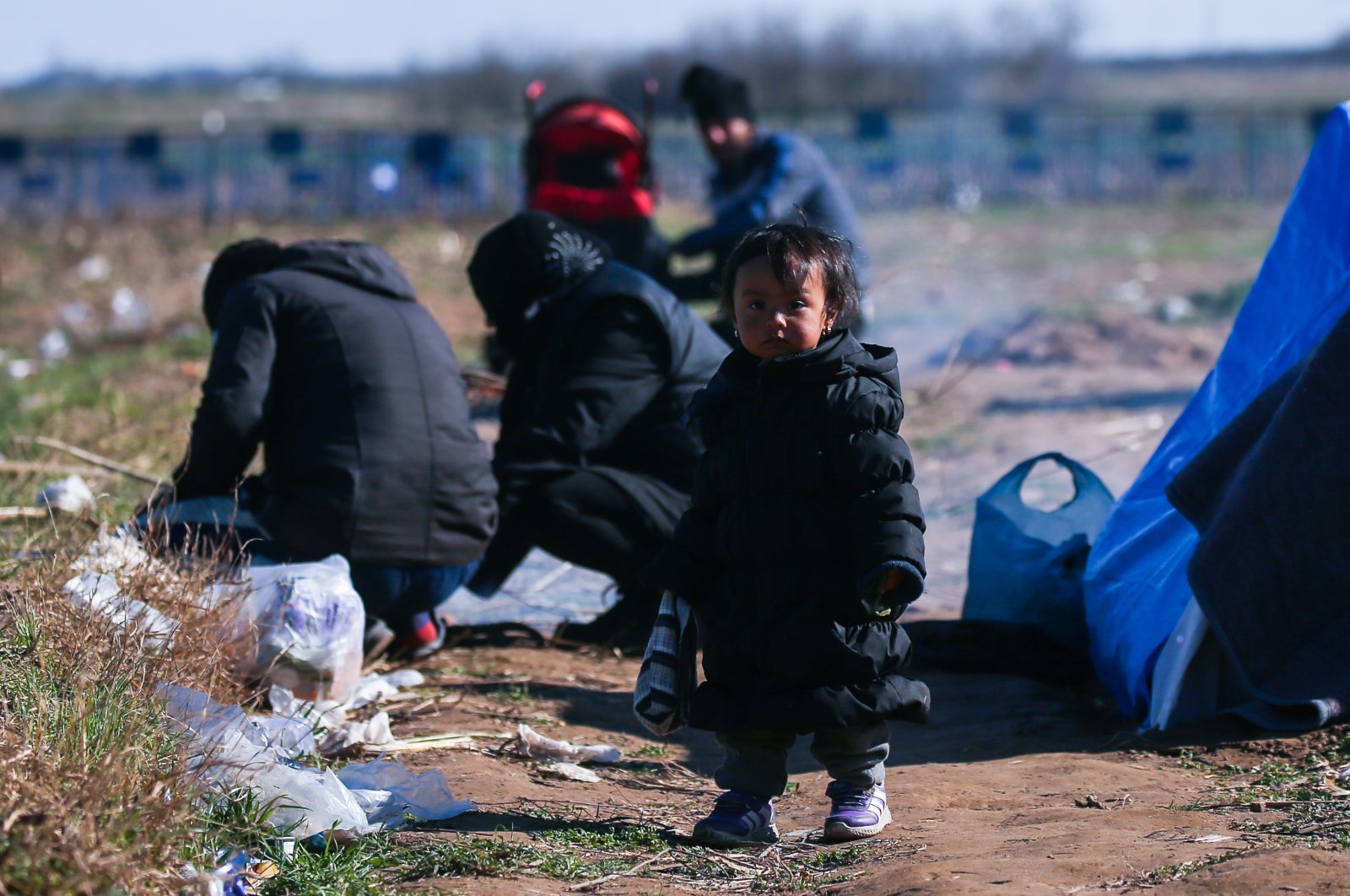 A child is seen in the area near the Turkish-Greek border where asylum-seekers and migrants have been waiting for more than two weeks to enter Europe, March 16, 2020. (AA Photo)
by Daily Sabah with AA Mar 18, 2020 12:08 pm
Edited By Dilara Aslan
RECOMMENDED

Greece is not only denying the right of asylum but also violating claimants' right to a better life, as migrants and asylum-seekers are left in limbo at the Turkish-Greek border amid harsh weather conditions and violence, head of the Migration and Adaptation subcommittee of the Turkish Grand National Assembly Atay Uslu said Wednesday.

“We have seen migrants and asylum-seekers dying of drowning and from the cold, but it is the first time we are seeing migrants and asylum-seekers dying from bullets being shot at them by a country’s security forces. This is not only a violation of the right of asylum but also the right to life,” Uslu told Anadolu Agency, after inspecting the Turkish-Greek border area.

Ankara recently announced that it would no longer try to stop migrants and asylum-seekers from reaching Europe. Thousands have since flocked to Turkey's Edirne province – which borders Greece and Bulgaria – to make their way into Europe. The Greek reaction to the migrants and asylum-seekers has been harsh, with many battered, attacked, tear-gassed and several killed by Greek forces.

Saying that the main reason behind Turkey’s decision to open the borders was the renewed refugee wave from Idlib, Uslu continued: “Millions of people in Idlib targeted in bombardments flooded toward the Turkish border to save their lives. One million people were at our borders. With the domino effect of this movement, Turkey took this decision.”

Turkey’s decision to open the borders came after the international community responded with silence to Bashar Assad regime’s assaults on civilians and civilian settlements in Syria. Turkey has frequently voiced concern that the surge in violence could cause another major refugee wave, which later came true as the Russian-backed regime displaced around 1 million people from northwestern Syria’s Idlib province. Criticizing the lack of international support on sharing the burden of looking after the fleeing civilian population, Turkey stated it would not absorb yet another refugee wave, as it already hosts 3.7 million refugees, more than any other country in the world.

Uslu explained that the commission had visited the border and that what he saw was a humanitarian tragedy.

“During the commission’s work, we witnessed attacks with real bullets. One refugee died in this incident. We know that the health of around 1,000 refugees was affected due to these interventions. We first thought that the bullets might not be real because there were women and children,” Uslu stated, urging international institutions to act fast against the use of force toward migrants and asylum seekers and regarding their rights of asylum

Since Feb. 27, some 147,132 asylum-seekers and migrants have crossed to Greece through two control points in Edirne, Turkey's western border, and transits are still underway, according to an official statement of the Edirne Governorate Tuesday.

Uslu further underlined that they had witnessed not only Greece but also the EU directly supporting forces on the border, with the presence of officials from FRONTEX, the European border protection agency. “The EU wants to hold migration away from its borders. This is no solution. If you want to manage migration, the right to asylum must not be spared. It has to be noted that asylum-seekers are not the root of the problem, but the victims,” he added.

Yet, violence still continues on the border. Clashes broke out overnight on the Greek border with Turkey early Wednesday, after 500 people attempted to break down a border fence and enter the country. Greek police said they used tear gas to repel the push to break down the fence south of the Kastanies border crossing. The clashes began at 2 a.m. and lasted for roughly two hours.

An estimated 2,000 people are still camped out on the Greek-Turkish border, waiting to be admitted into Europe.