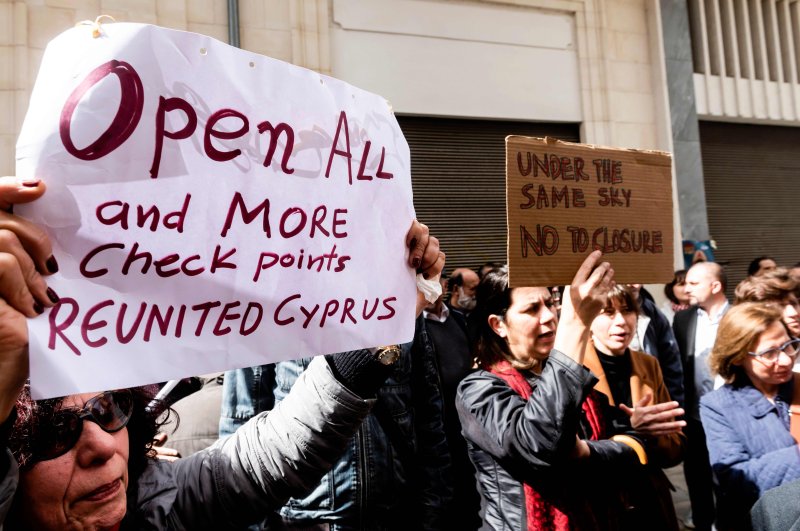 Cypriot demonstrators gather during a protest against the closure of checkpoints on Ledra Street in the divided capital of Nicosia on Nov. 29, 2020. (AFP Photo)
by Daily Sabah with Reuters
Mar 01, 2020 4:45 pm

The Greek Cypriot administration decided Friday to unilaterally close down four checkpoints on the U.N.-controlled Green Line, dividing the island’s south and north, for seven days as a precaution to the coronavirus outbreak.

However, the Council of Ministers' decision to close the checkpoints of Ledra Street, Astromeritis, Lefka and Dherynia, for the first time since 2003, faced harsh criticism and protests after it was seen as an effort to further divide the island.

Cyprus has no reported cases of coronavirus, but Health Minister Constantinos Ioannou said the four checkpoints, including one in the capital Nicosia, used by hundreds of people daily, would close starting Saturday, Feb. 29.

“This is a temporary measure and the aim is to protect both communities,” the minister said, adding that the U.N. has been informed while President Nicos Anastasiades has spoken with Turkish Cypriot leader Mustafa Akıncı.

Turkish Cypriot leader Mustafa Akıncı, however, joined the critics, saying the measure “had nothing to do with the coronavirus.”

The situation at the checkpoint was "chaotic" and the government’s decision separated rather than united the two communities, he added.

In a post on Facebook, Akıncı wrote: “Have just witnessed the chaotic situation at the Kermia-Ay Dometios Checkpoint. Hundreds of cars had been waiting for hours for the only two GC police officers to check their ID’s, as a measure which has been introduced today and definitely has nothing to do with the coronavirus. Lots of people are protesting, some were leaving their cars to be able to cross on foot. As I have already conveyed to Mr. Anastasiades, we need to tackle the problem on a scientific basis; but the decision of the GC leadership, unfortunately, lacks that and is in the direction of separating the two communities more, rather than uniting them.”

Following the decision that created dismay among the people, a group of Greek Cypriots protested at the Ledra checkpoint, taking down barricades to reach the Turkish Cypriots that were waiting on the other side for support. The protesters, which were hindered by the Greek Cypriot Police, shouted slogans like, “Peace in Cyprus cannot be prevented” at the Green Line in both Turkish and Greek.

Prime Minister Ersin Tatar of the Turkish Republic of Northern Cyprus (TRNC) also condemned the decision saying that the unilateral closure was “meaningful and that this move once again reflected the disrespectfulness toward Turkish Cypriots."

“As a peace movement, this measure is not only an insult to our intelligence but also the rights of our people,” said Kemal Bakykallı of the Unite Cyprus Now movement.

Another activist in the same group, Andromachi Sophocleous, told Reuters: “It is cooperation which is needed and not further measures which enhance partition.”