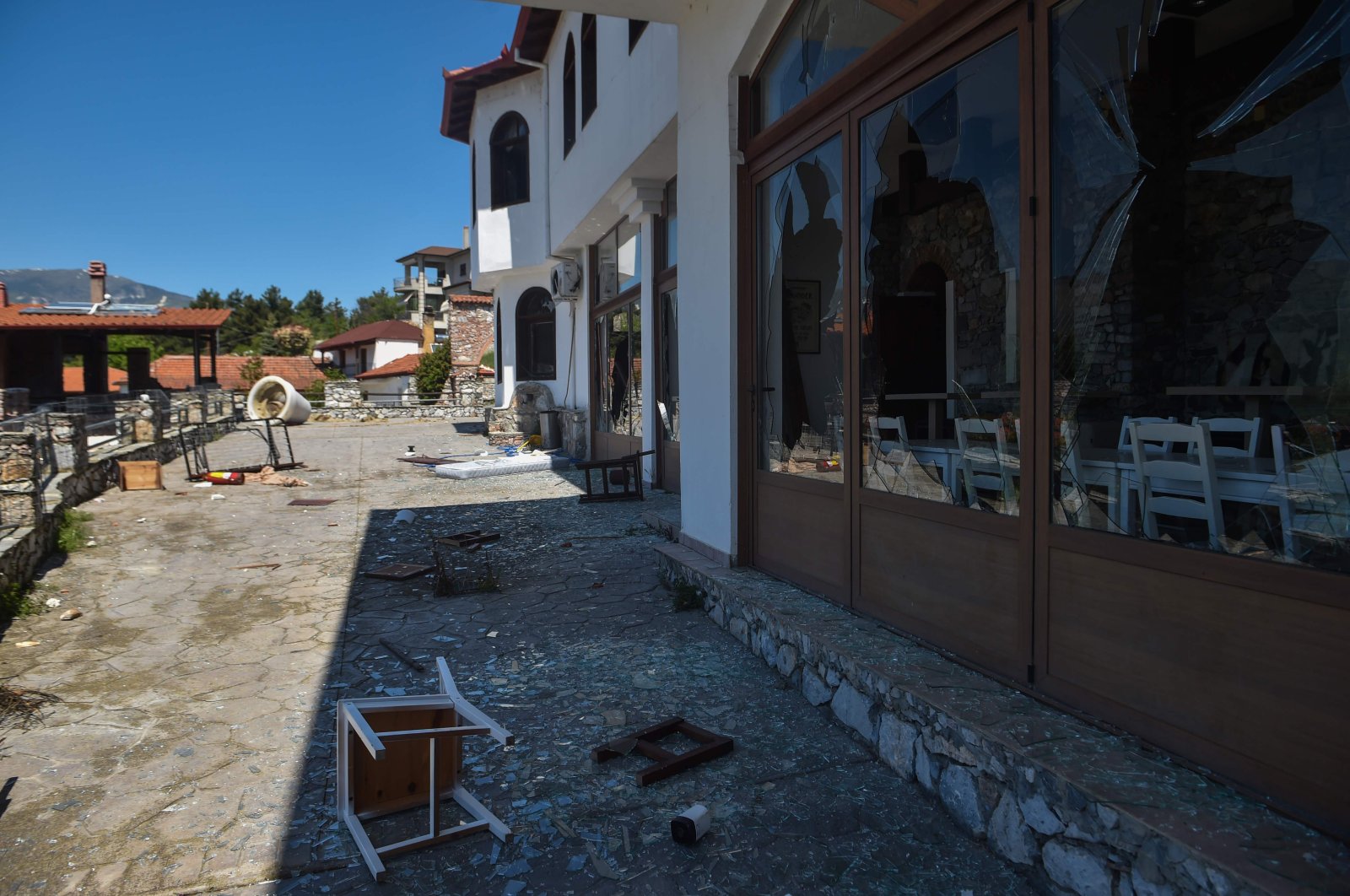 View of the damage on May 8, 2020, caused by some 250 protestors who ransacked a hotel to prevent the settlement of 57 refugee families on May 4, in the village of Arnissa, 560km north from Athens. (AFP Photo)
by Daily Sabah with AFP May 12, 2020 9:37 am
Edited By Nurbanu Tanrıkulu Kızıl
RECOMMENDED

When plans were leaked last week to move dozens of asylum seekers from an island camp to a hotel in the northern Greek village of Arnissa, there was a swift and violent response.

Around 250 people burned and looted the empty hotel to prevent the transfer, according to eyewitnesses, in the latest tensions over the relocation of migrants in Greece.

"It was really scary. They threw stones, lit fires and ransacked the entire hotel," said a young woman who declined to give her name.

"My father who is old and lives near the hotel hasn't slept for two days because of his fear," she told AFP.

The Greek government has promised to transfer more than 2,000 asylum seekers from islands to the mainland to ease pressure on camps.

But fed up with shouldering the burden of Europe's snail-paced asylum system, locals have protested against the presence of migrants in their towns.

Government spokesman Stelios Petsas on Monday attributed the May 5 incident to "misinformation" and misplaced fear among locals that refugees will spread the coronavirus.

"Where there are pockets of opposition it's usually due to misinformation... not everyone has understood that we have taken very specific measures since the start of the health crisis," he told reporters.

Police have opened an investigation into the attack which left the hotel in ruins, but no arrests have been made.

Windows were broken, furniture was smashed and the rooms were strewn with rocks and charred debris.

The owners requested anonymity for fear of further reprisals. Meanwhile, some residents stressed that the asylum-seekers were not welcome.

"Nothing happened here. We just chased away the illegal migrants," one irate villager said.

Attempts to move elderly refugees or families with children from overcrowded island camps to the mainland have run into opposition before.

The same refugees that were going to stay in Arnissa — whose nationalities were not disclosed — were previously living in the dismal Moria camp on the island of Lesbos, and had earlier been denied entry into another village in northern Greece.

In October, a hotel owner in the town of Vrasna near Thessaloniki said she had received arson threats after agreeing to temporarily host a group of asylum-seekers.

In the days before the Arnissa hotel was destroyed, rumors were circulating that authorities were bringing people to the village who were "presented as monsters," said Dimitris, a 68-year-old resident.

Dimitris said he believed some of last week's attackers are themselves descended from ethnic Greek refugees uprooted from Turkey decades earlier.

"Refugees chasing refugees. This is unbelievable to me," he said.

Another villager, 36-year-old Panagiotis, said that some locals had posted footage of the attack on their social media accounts.

"Now that the police are investigating, they deleted these posts and are hiding," he said.

The mayor of nearby Edessa, the largest town in the area, has questioned the logic of the transfer in the middle of the coronavirus pandemic.

More than 150 people have died from COVID-19 in Greece. Migrant camps have been placed under lockdown until May 21.

There have been confirmed cases in two camps and at a hotel on the mainland — although none in migrant facilities on islands such as Lesbos.

"Now that we are wary about the course of the coronavirus contagion... they decided to transfer migrants," Edessa mayor Dimitris Yannou wrote on Facebook days before the hotel attack.

"Edessa is too full of refugees and migrants," he added.

The asylum-seekers from Lesbos were eventually transferred in secret to a hotel near Thessaloniki by the International Organization for Migration (IOM).

"These people remain in quarantine for 14 days as is prescribed," said an IOM representative in charge of their transfer.

"They are safe and healthy. We support them and they want to forget what happened."
Turkey and Greece have been key transit points for asylum-seekers, refugees and migrants seeking to cross into Europe to start new lives, especially those fleeing war and persecution.

The latest humanitarian crisis in Idlib, caused by Assad's attacks on civilian-populated areas, has forced nearly 1 million people to move near the Turkish border for refuge. The renewed attacks risked another wave of migration to Turkey, which already hosts 3.7 million Syrian refugees and says it cannot take in any more.

Greece's response to those trying to enter the country without prior authorization has been harsh, with at least three migrants have been killed by Greek security forces on the land border with Turkey. Many others have been battered and teargassed.