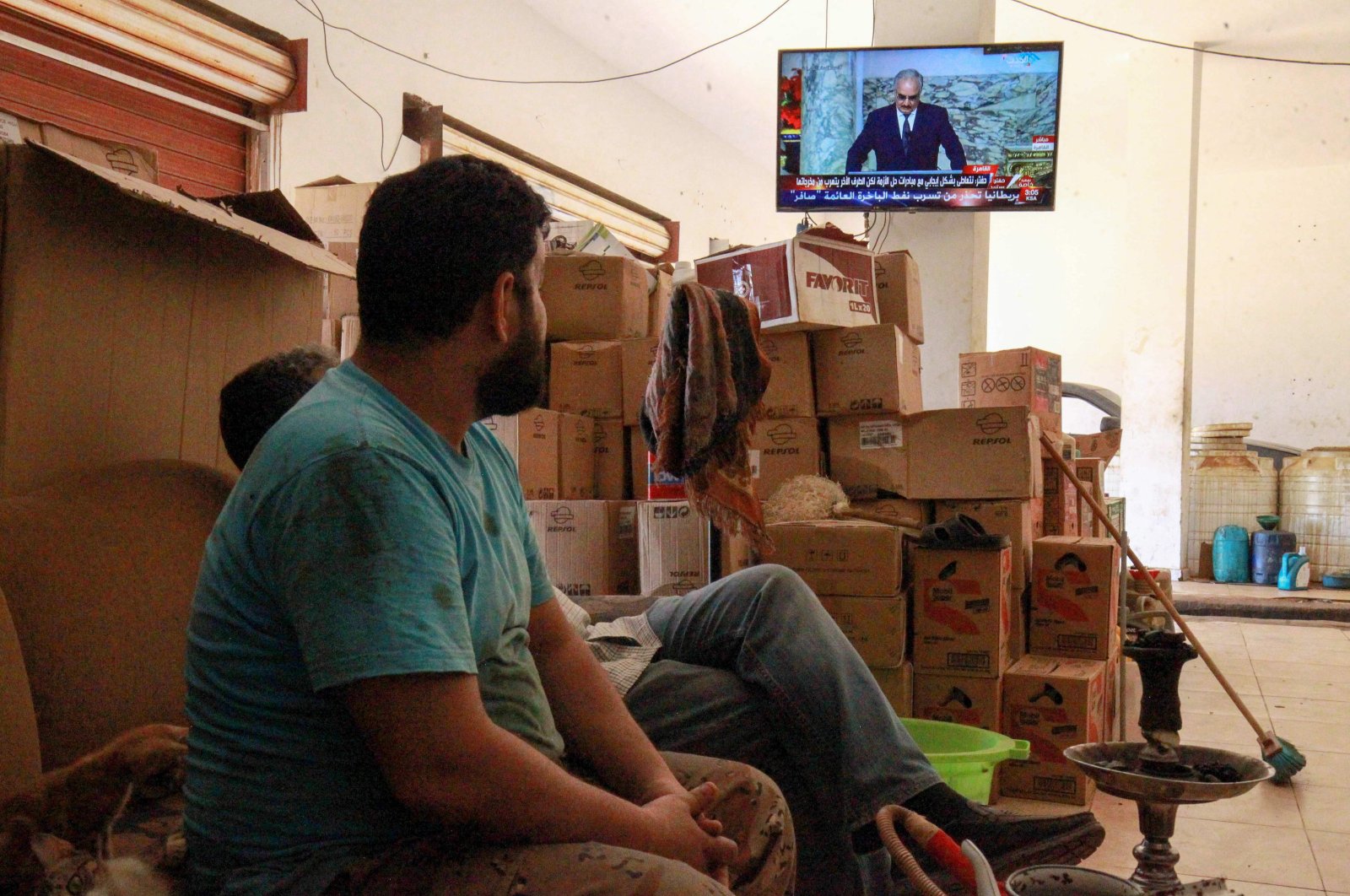 Libyan mechanics watch a televised speech by putschist Gen. Khalifa Haftar, during the talks dubbed the "Cairo declaration" at their shop in the eastern Libyan port city of Benghazi on June 6, 2020. (AFP Photo)
by DAILY SABAH Jun 06, 2020 6:09 pm
RECOMMENDED

Putschist Gen. Khalifa Haftar has backed a cease-fire in Libya, Egyptian president announced Saturday following a series of strategic victories by the U.N.-recognized Libyan government forces, including Haftar stronghold Tarhuna and the town of Bani Walid.

El-Sissi urged a cease-fire to begin in Libya as of June 8 as part of “the initiative” and called for "dismantling militias and handing over their weaponry so that Libya's National Army (led by Haftar) would be able to carry out its military and security responsibilities and duties.”

The Egyptian president also said the initiative paves the way for forming an elected presidential council in Libya.

Egypt is one of several countries, along with the UAE and Russia, that have supported the militias of the Libyan warlord against Libya's Government of National Accord (GNA), supported by Turkey.

The first reaction from the Libyan government members signaled a rejection for the initiative. Mohammed Ammari Zayed, a member of the Libyan Presidential Council, said on his Twitter account that they will continue to “liberate the entire homeland and strengthen the government’s authority.”

The news conference came after the Libyan Army liberated Haftar's last stronghold in northwestern, Tarhuna, and the strategic town of Bani Walid.

"Our heroic forces have extended their control over the whole of Tarhuna,” Kununu said.

"Orders have been given to our forces to begin their advance and to systematically attack all rebel positions," he added.

Sirte was taken by Haftar's forces virtually without a fight in January after one of Libya's myriad local militias switched sides.

In March, the Libyan government launched Operation Peace Storm to counter attacks on the capital and recently regained strategic locations, including the al-Watiya air base, a major blow to Haftar's forces.

Libya's government was founded in 2015 under a United Nations-led agreement, but efforts for a long-term political settlement failed due to military offensives by Haftar's forces, which have killed around 1,000 people since April 2019.