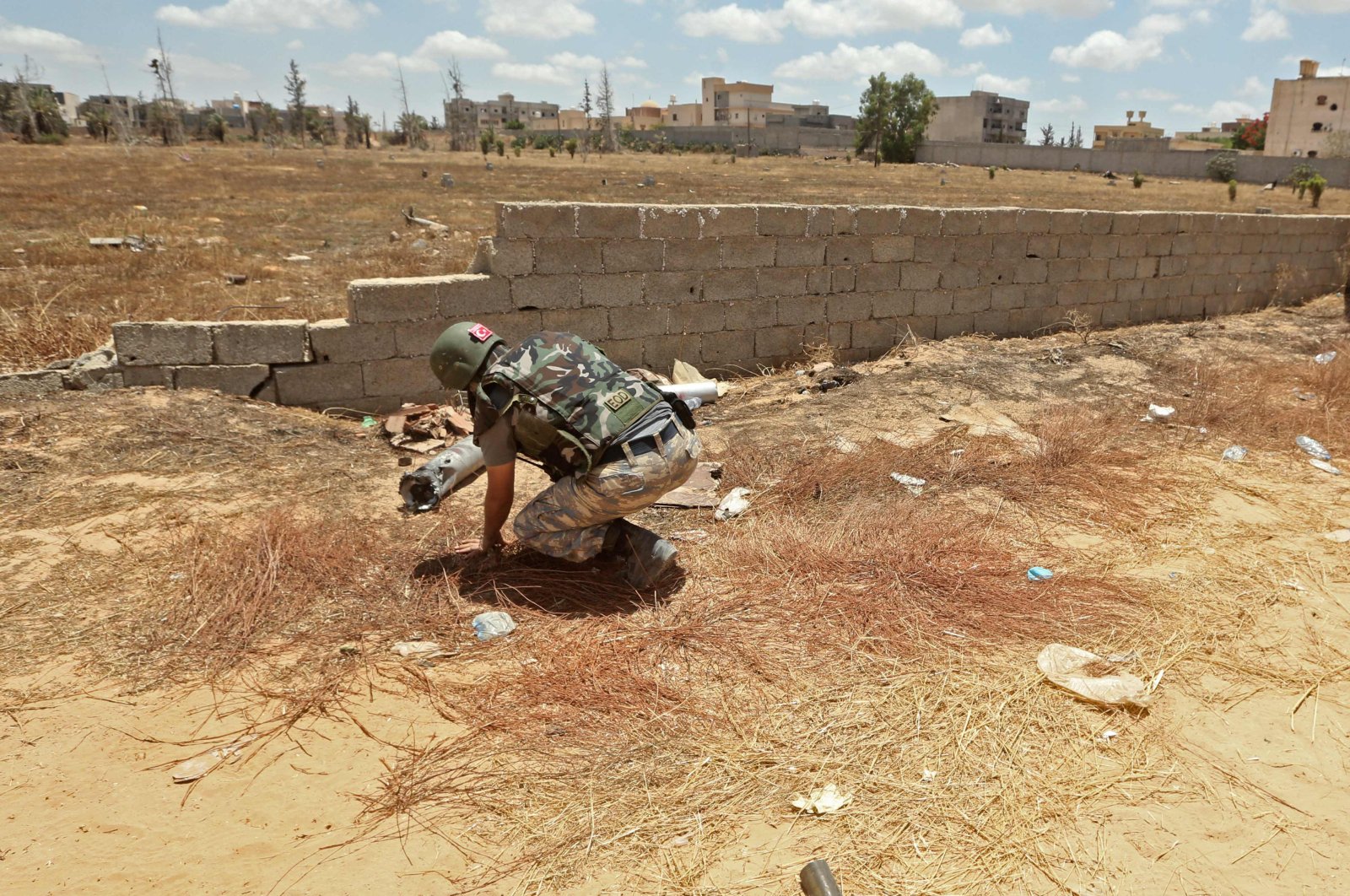 A Turkish de-miner takes part in the clearance of unexploded ordnance in the area of Salah al-Din, south of the Libyan capital Tripoli, June 15, 2020. (AFP Photo)
by DAILY SABAH WITH AGENCIES Jun 16, 2020 9:31 am
Edited By Nurbanu Tanrıkulu Kızıl

The acrid scent of gunpowder still hung in the air in the war-torn south of Libya’s capital when Hicham Suleiman, a teacher in his 50s, cautiously approached his home.

He left his car some 400 meters (164 yards) from his house and continued on foot, anxious about booby traps hidden by retreating forces, like the one that days earlier had killed his neighbor.

Only the sound of Suleiman's footsteps broke the silence in the Tripoli outer suburb of Al-Khalla, which until several weeks ago had been a battlefront for more than one year.

When Hicham reached his property, he found the garden gate blown away by a shell and the house half-destroyed, a sight he said left him heartbroken.

"It's not just because of my destroyed house but the way the war has transformed my neighborhood," he said.

"It's as if a huge meteorite hit it."

Civilians like Suleiman returning to their homes in areas liberated from putschist Gen. Khalifa Haftar's militias in the Libyan capital Tripoli fear for their lives as the threat of landmines planted by the warlord’s forces lingers.

At least one civilian was killed early Tuesday by a landmine planted by militias loyal to Haftar as they were withdrawing from residential areas south of the capital Tripoli.

According to a statement issued by the press office of the government's Burkan Al-Ghadab (Volcano of Rage) operation, the explosion killed one and injured another in a car on the road to Tripoli's airport.

Data compiled by Anadolu Agency (AA) based on Libyan Army figures showed that at least 31 civilians have died and 40 others have been wounded by landmine explosions in the last 10 days.

Oil-rich Libya has been torn by years of violence, drawing in tribal militias, terrorists and mercenaries, since the 2011 toppling and killing of longtime dictator Moammar Gadhafi in a Western-backed uprising.

The latest escalation started on April 4, 2019, when Haftar, a former Gadhafi loyalist and onetime CIA asset, attacked Tripoli, the seat of the U.N.-recognized Government of National Accord (GNA).

Hundreds died and some 200,000 people were displaced by the onslaught of Haftar forces backed by the United Arab Emirates (UAE), Egypt and Russian mercenary forces.

But then the GNA, with stepped-up support from Turkey, pushed back the would-be invaders and launched a quick counter-offensive that has reclaimed all of northwestern Libya.

The United Nations last week voiced "horror" over reports that eight mass graves had been discovered in Tarhuna, formerly the main rear base of Haftar forces southeast of Tripoli.

The scale of destruction is staggering in Al-Khalla – a strategic crossroads south of Tripoli – but many families want their homes back nonetheless to stop drifting from shelter to shelter.

"I put all my savings and 10 years of my life into building this house," Hicham, the teacher, said with sorrow as he leafed through one of the few books that had not been burned or torn apart.

He vowed to rebuild his house, telling Agence France-Presse (AFP) he could no longer afford to rent temporary accommodation for his family of five.

But amid the abandoned homes, a new and insidious danger lurks: anti-personnel mines and improvised explosive devices (IEDs) that have been laid by Haftar’s forces in houses, gardens and along roads.

They have been hidden in kitchen pantries and toilet cisterns, under roof tiles and construction materials, often with two or three devices stacked atop one another to make de-mining almost impossible.

Libyan ordnance clearance experts have marked high-risk areas with signs and wall inscriptions, but the warnings have come too late for many.

More than 30 people have been killed and 60 injured by mines, most of them civilians, said the Health Ministry in Tripoli.

The U.N. Mission in Libya on May 26 "strongly condemned" any use of anti-personnel mines against civilians and denounced the "deliberate targeting" of noncombatants.

Anti-personnel mines are banned by an international treaty, although major powers including China, Russia and the United States have not signed it.

The GNA says pro-Haftar forces have "mined the houses before leaving them" and asked for international assistance to clear them.

A team of Turkish de-miners who arrived in Tripoli last week have joined the clearance effort under a broader military cooperation agreement signed late last year between the GNA and Ankara.

Pro-Haftar forces have not commented on accusations they are responsible, but unauthenticated videos on social networks have shown pro-Haftar fighters preparing explosive devices in a house in the Salaheddine district.

The unit's men had dismantled mines and recovered remnants of ammunition from 5 hectares (12 acres) of land.

"It is difficult to know the extent of the areas south of Tripoli where very dangerous and very new mines, of types unknown in Libya, have been laid," Bayou said.

For the time being, the GNA has suspended the return of families to their homes in uncleared areas.

Meanwhile, fighting has continued elsewhere, despite cease-fire calls by the U.S., the EU and other foreign powers.

The legitimate government has vowed to push on for Sirte, Gadhafi’s hometown and the last major settlement before the traditional boundary between western Libya and Haftar's stronghold in the east.

The Libyan Army has recently inflicted heavy blows on the putschist commander's forces and liberated Tripoli and Tarhuna from his militants.