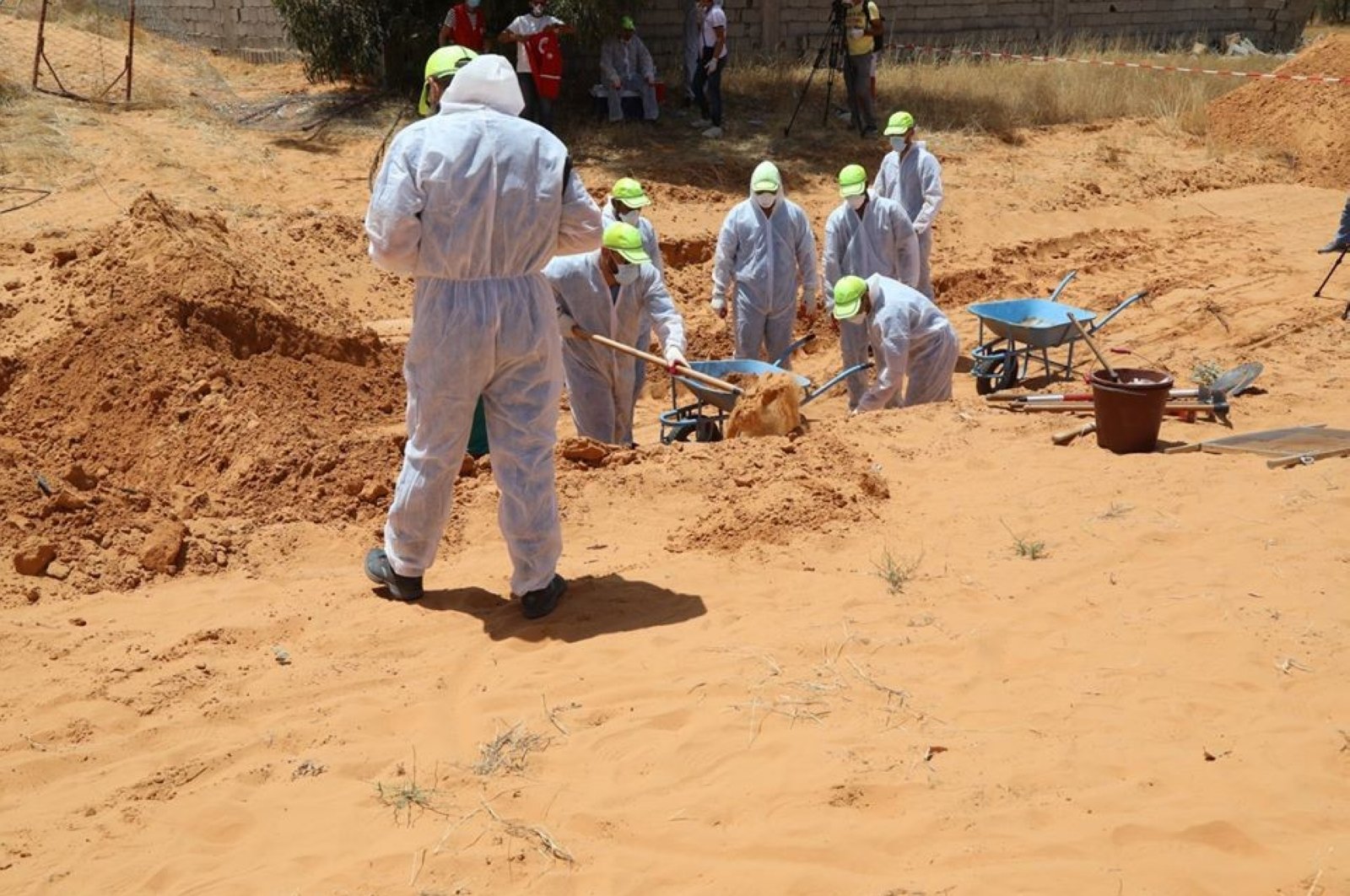 Despite calls for a cease-fire, militias loyal to putschist Gen. Khalifa Haftar continues to target civilians and new mass graves are being discovered nearly every day in places they vacate. The United Nations is closely monitoring the situation and is repeating its call for a probe into the conflict while warning of further escalations.

A woman was killed and her son was wounded on Saturday when a landmine planted in a residential area south of the capital Tripoli by Haftar's withdrawing forces exploded, the Libyan Army said. According to a statement issued by the press office of the Burkan Al-Ghadab (Volcano of Rage) Operation, the explosion took place in the Ayn Zara region.

Data compiled by Anadolu Agency (AA), based on Libyan Army figures, shows that at least 30 civilians have died and 40 others have been wounded by landmine explosions in the last 10 days.

Meanwhile, the Libyan government announced Friday that three additional mass graves were found in Tarhuna, which was liberated by the army last week from Haftar militias. They were found in areas where eight other mass graves were recently found. Tarhuna was used as the operation and supply center of the forces loyal to Haftar, according to the U.N.

The Justice Ministry also announced the grave areas will be cordoned off for forensic investigations.

"UNSMIL notes with horror reports on the discovery of at least eight mass graves in past days, the majority of them in Tarhuna," the UNSMIL tweeted.

More than 150 bodies, including women and children, were exhumed from the graves near Haftar's last stronghold in western Libya before its liberation.

The GNA launched Operation Peace Storm in March to counter attacks on the capital and recently regained strategic locations, including al-Watiya air base and Tarhuna.

"Yesterday, the U.N. Mission in Libya expressed horror at the reports of at least eight mass graves in past days, the majority of them in Tarhuna," Stephane Dujarric, the spokesperson for Secretary-General Antonio Guterres, said in a statement late Friday.

"International law requires that the authorities conduct prompt, effective and transparent investigations into all alleged cases of unlawful deaths," he added.

"The Office for the Coordination of Humanitarian Affairs said that nearly 24,000 people have fled their homes in the last week following increased insecurity in southern Tripoli, Tarhuna and Sirte," Dujarric said.

"Most people have fled to eastern Libya. Most of the newly displaced are sheltering with relatives, friends and other host families. The U.N., once again, urges all parties to the conflict to respect the rule of law, for civilians to be protected, and for all efforts to be made to deescalate tensions," he added.

The Libyan government also released a statement on Saturday, pointing out that Haftar's forces have been committing crimes against humanity in the war-torn country.

The government accused the Haftar militia of "executing an entire family, including women, children and elderly, dropping their bodies to water wells and burying some of them alive." It also added that these crimes are "genocide."

Despite an increasing number of graves being found, people are still missing, the statement further stated.

It also called for an international probe and reaction against such brutalities and crimes against humanity.