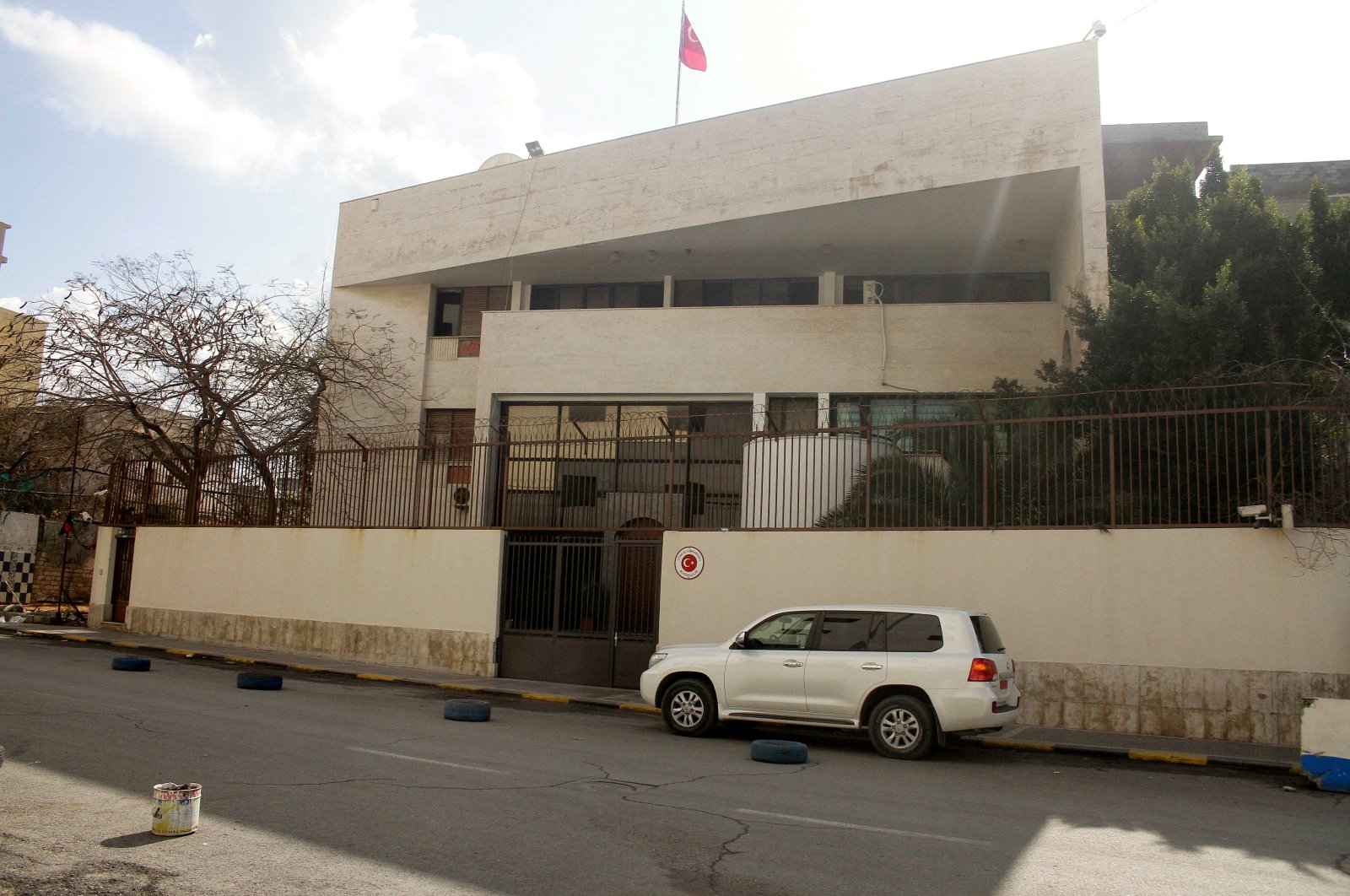 Shelling by the forces loyal to putschist Gen. Khalifa Haftar fell near the Turkish embassy in the capital Tripoli, May 8, 2020. (REUTERS Photo)
by DAILY SABAH WITH AGENCIES May 08, 2020 11:50 am

While the forces of Libya's U.N.-recognized government advance, putschist Gen. Haftar continues attacks targeting civilians and residential areas, with recent shelling falling near the Turkish and Italian embassies in the capital Tripoli

As government forces have intensified their operation against eastern-based putschist Gen. Khalifa Haftar, his forces continue targeting civilians and residential places in retaliation. Most recently, a shelling by Haftar forces hit a coastal road near the Turkish and Italian embassies in the capital Tripoli.

Libyan Foreign Minister Mohamed Taher Siala said in a statement that the attacks did not comply with international laws, as they struck the coastal road near the residences of the Turkish and Italian ambassadors.

Condemning the attacks, Siala spoke by phone with Turkey and Italy's ambassadors to Libya.

The Turkish ambassador told Reuters in a message that a Grad missile had struck the High Court building next to the embassy and another landed by the Foreign Ministry.

The Italian Foreign Ministry strongly condemned the attacks. In a statement, it said the indiscriminate strikes were completely unacceptable.

Italy's Foreign Ministry said on Twitter the area near around the Italian ambassador's residence was hit, causing at least two deaths. "Italy strongly condemns yet another attack by Haftar forces. These attacks are unacceptable and denote contempt for international law and human life," it said.

Shells also landed around the city's port, where the United Nations migration agency had to abort an operation to disembark migrants who had been rescued at sea.

In separate incidents, at least three people, including a civilian, were killed when Haftar's forces carried out rocket attacks in the capital and a nearby area, the government said early Friday.

Rockets struck the port of Tripoli, Mitiga International Airport and a coastal road, said Mustafa al-Mujie, the spokesman for the government's Operation Volcano of Rage.

Amin al-Hashemi, a spokesman for the Health Ministry, said two security staff and one civilian were killed and four others were injured in the attacks.

“This the first time since the beginning of 2020 that residential neighborhoods have been this intensively targeted,” he said.

According to a statement by the center for Operation Volcano of Rage, Haftar's forces have continued to attack civilian settlement areas in Tripoli and other cities in May.

"At least 14 civilians were killed and 30 others were injured by Haftar's forces since the beginning of May," said the center.

The U.N. Libya mission said last month that during the first quarter of 2020, at least 131 civilians were killed or injured, a rise of 45% over the last quarter of 2019 as the fighting escalated.

At the United Nations, U.N. spokesman Stephane Dujarric said the world body would continue “to remind the parties of their obligations under international humanitarian law to take all feasible measures to avoid civilian harm.”

Earlier this week, the International Criminal Court’s (ICC) prosecutor Fatou Bensouda said her office is working on new arrest warrants for possible war crimes committed in Libya. Attacks on civilians may constitute crimes under the Rome Statute that established the ICC, she said, adding that military commanders will be held accountable for crimes committed by their forces.

The fighting over Tripoli has intensified in recent weeks despite U.N. calls for a cease-fire to allow authorities to focus on curbing the spread of the coronavirus. Libya has so far recorded 64 virus cases, including three deaths. The pandemic could possibly devastate war-torn Libya, where the decadelong conflict has ravaged key infrastructure and created dire medical shortages.

Dujarric said that already this year, 13 attacks have impacted field hospitals, health care workers and ambulances, including attacks on hospitals identified to treat COVID-19 in Libya. He added that “the U.N. fears that figures may be underreported as there is a lack of testing capacity and contact tracing.”

Meanwhile, militias loyal to putschist Haftar have surrendered to the Libyan Army as the Government of National Accord (GNA) intensifies operations against an air base run by the former's illegitimate eastern-based forces.

The Libyan Army has carried out 12 air operations against Haftar forces in the past 24 hours, military sources said late Thursday.

Muhammed Kununu, the military spokesman for the government, said in a statement that the army had carried out nine air operations against Al-Watiya air base, located southwest of the capital Tripoli and controlled by Haftar's forces.

He added that the operations targeted military vehicles, three tanks and 13 militias, including Mohamed al-Dahir, who is wanted by the Libyan prosecutor-general's office in connection with several criminal cases.

Six members of Haftar's forces surrendered to the Libyan Army on Friday at Al-Watiya air base, according to the media center of the government's Operation Volcano of Rage.

Later in the day, the Libyan government said that 15 of Haftar militia were killed in airstrikes that hit the vicinity of Al-Watiya airbase.

Earlier this week, the Libyan army carried out 24 air operations as part of a massive offensive aimed at capturing al-Watiya air base. Al-Watiya, located southwest of the capital Tripoli, is regarded as a key air base in the country, second only to Mitiga International Airport. In August 2014, it was captured by Haftar, who used it as his headquarters for western operations.

The Libyan government has been under attack by Haftar's forces since April 2019, with more than 1,000 people killed in the violence. It launched Operation Peace Storm on March 26 to counter attacks on the capital.

As part of Operation Peace Storm, air operations are being periodically carried out against al-Watiya by the Libyan Army, which has recently made gains against Haftar's militias, which are supported by France, Russia, the United Arab Emirates and Egypt.

US: Russia to transfer Syrian militia

Touching upon the latest developments in the war-ravaged country, U.S. envoy for Syria James Jeffrey said Thursday that Russia is working with Syria's Bashar Assad regime to transfer mercenaries to Libya to fight alongside Haftar's forces.

"We know that certainly, the Russians are working with Assad to transfer militia fighters, possibly from a third country, possibly from Syria, to Libya, along with equipment," Jeffrey told reporters via teleconference.

During the call, Deputy Assistant Secretary of the Bureau of European and Eurasian Affairs Christopher Robinson said Moscow's effort to expand its presence in Africa and along the Mediterranean Sea is worsening the situation there.

"Libya has become the next venue for Russia's malign efforts to exploit regional conflicts for its own narrow political and economic gain. While Russia often publicly claims support for a political solution, such as in Syria or Libya, it simultaneously engages in activities that undermine a political peace process and widen the conflict," said Robinson.

Russian support to Haftar "has led to a significant escalation of the conflict and a worsening of the humanitarian situation in Libya," he added.

"Wagner is often misleadingly referred to as a Russian private security company, but in fact, it's an instrument of the Russian government which the Kremlin uses as a low-cost and low-risk instrument to advance its goals," Robinson told reporters.

He said that images of "very heavy and advanced weapons" in Libya arriving thanks to the Wagner Group indicated it was not a mere private company.

Russia has provided material and logistical support to the Wagner Group, a private militia with alleged links to an associate of President Vladimir Putin. Russia denies any links.

"More recently, Russia, in coordination with the Assad regime, has ferried Syrian fighters to Libya to participate in Wagner operations" in support of Haftar forces, said the official.

Since April 24, a high-ranking Russian commander and his team have reportedly held a series of meetings with mercenaries fighting for the Assad regime in Daraa.

In these meetings, Russia offered $1,000 and a three-month renewable contract to the Syrian mercenaries in exchange for their services in Haftar's ranks.

Operation IRINI, currently headquartered in Rome, aims to halt the flow of arms into Libya.

The sea mission began Monday with the French naval vessel Jean Bart and a maritime patrol aircraft contributed by Luxembourg, the EU said in a statement.

"It shows EU commitment to peace in Libya, even at times when member states are battling the coronavirus pandemic," Borrell said in the statement.

World leaders agreed to uphold the U.N. embargo at a Berlin peace conference in January.

The mission's launch had been held up for nearly a month by bickering between Italy and Greece over who should hold the command.

The EU agreed to rotate the operation's command between the two countries every six months.