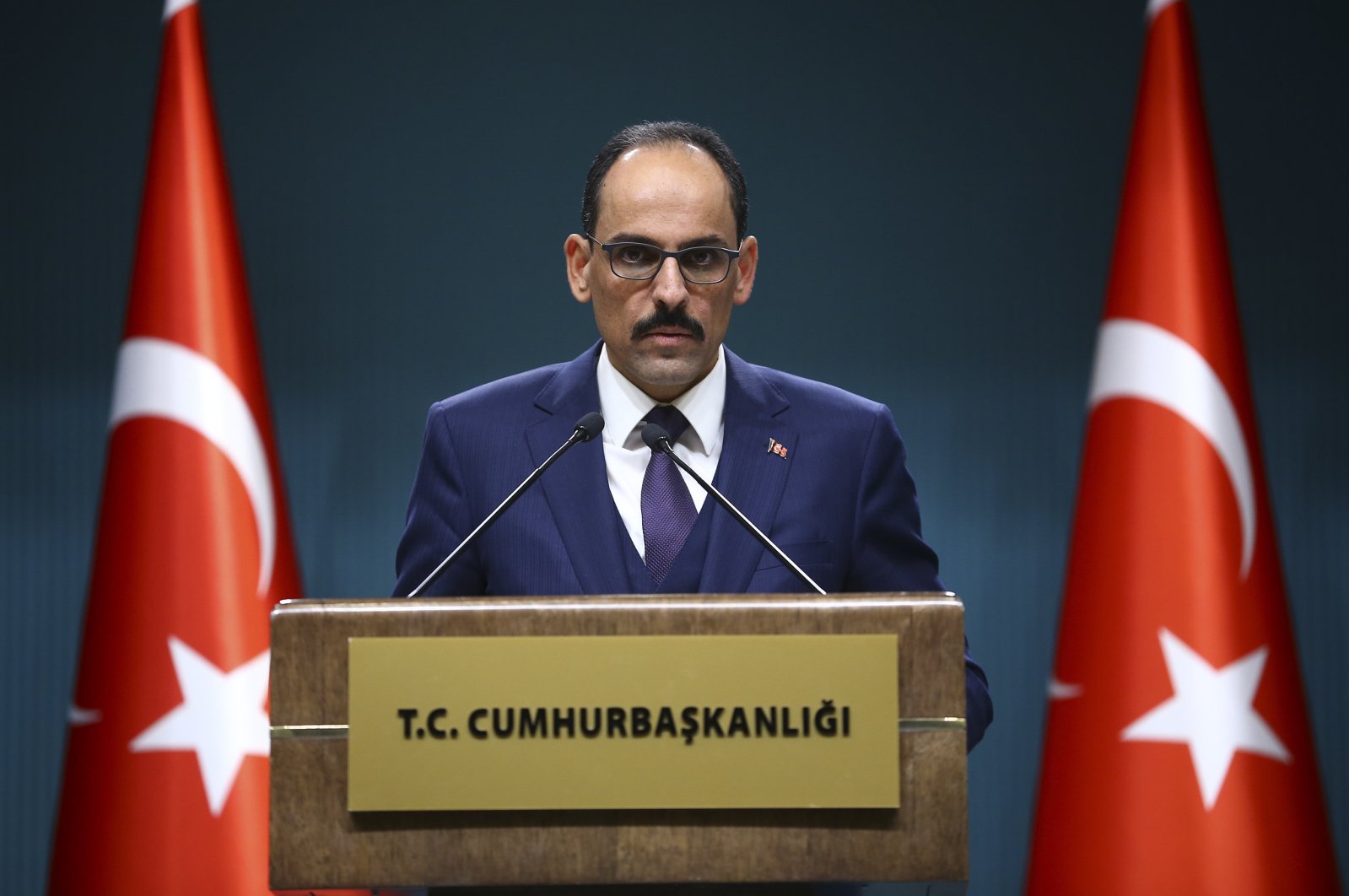 Turkey on Saturday announced that forces loyal to Libya's eastern-based putschist Gen. Khalifa Haftar must withdraw from the strategic city of Sirte in order to ensure a lasting cease-fire, accusing France of "jeopardizing" NATO security.

İbrahim Kalın, the presidential spokesman, said that Turkey supports the position of the U.N.-recognized Government of National Accord (GNA) in Tripoli, saying Sirte and Jufra needed to be evacuated by Haftar's forces for a "sustainable cease-fire."

"It should be a sustainable cease-fire, meaning that the other side, the LNA (Libyan National Army), should not be in a position to launch another attack on the legitimate Libyan government any time it wants," Kalın told AFP in an interview in Istanbul.

Libya has been mired in chaos since a Western-backed uprising in 2011 toppled longtime dictator Moammar Gadhafi only to leave rival warlords fighting for control of the country's oil wealth and drawing in international powers as the conflict has ebbed and flowed.

Ankara's support for the U.N.-recognized GNA in Tripoli has turned the tide in the conflict in Libya while Haftar, a former Gadhafi army commander who is supported by Russia, Egypt and the United Arab Emirates (UAE), has been battling to take the capital Tripoli since last year.

A high-level Turkish delegation including Kalın, the foreign minister and intelligence chief paid a visit to Tripoli on Wednesday on an unannounced trip.

Kalın said a cease-fire in Libya would be possible only if everybody went back to their 2015 positions, referring to an agreement reached that year in Morocco. That would mean Haftar withdrawing from Sirte and Jufra.

"This is the position of the GNA and we support it because right now Haftar's forces are using strategic locations as a launchpad against the legitimate government," said Kalın.

"They are also using these places to exploit Libya's oil resources to finance their war."

Turkish-backed GNA forces, which regained control of the whole of northwest Libya early this month, remain hampered in their advance toward Sirte, a coastal city and gateway to the country's key oil fields in the east.

Sirte, located 450 kilometers (280 miles) east of Tripoli, briefly served as a stronghold for the Daesh terror group, before being liberated by the GNA in 2016. It fell last January into the hands of Haftar's camp.

He warned against a rushed truce, stating: "A rushed, premature cease-fire will not lead to what we want to achieve for all Libyans there."

Haftar has no future in Libya

Also touching upon Haftar's role in Libya's future, Kalın said: "He has been unreliable from the very beginning. He has spoiled every single cease-fire agreement, every attempt at de-escalation – and the GNA will support no talks that involve Haftar. This is what we are gathering from their analysis and we support that."

Kalın accused the UAE of "financing this war" in Libya and said attempts to attack Turkey and President Recep Tayyip Erdoğan for their role in the Arab-Muslim world were "foolish."

On Egypt, Kalın said Ankara understood Cairo's "legitimate" security concerns over the Egyptian-Libyan border but that supporting Haftar was the "wrong policy."

Asked about Turkey's future in Libya, Kalın said: "We will be there as long as we are requested by the Libyan government to be there."

"Given all this they still blame us, they still criticize us ... We are working with legitimate actors here. It is France that is intervening in all of those areas, working with the wrong actors, supporting illegitimate players and then turning and accusing us."

Tensions have increased between Turkey and France, which has long been suspected of favoring Haftar until his recent battlefield setbacks.

NATO has launched an official investigation into a naval incident in the Mediterranean between the alliance members after France denounced an "extremely aggressive" act by Turkish frigates against a French navy vessel.

Paris has complained that one of its ships was subjected to radar targeting by Turkish frigates while trying to inspect a cargo vessel believed to be carrying arms to Libya.

But Ankara dismissed the allegations as "groundless."

In another statement, Turkish Defense Minister Hulusi Akar said Saturday that France's harassment claim against Turkey was completely delusive based on all the documents and recordings about the event.

"When we review the information, documents, all recordings in our vessel and headquarters, it can be seen that the claim in question is totally unrealistic," Akar told Anadolu Agency.

Akar said the Turkish Naval Forces even provided fuel to the ship upon France's request.

"Information and documents proving Turkey's rightfulness have been shared with allies and civilian and military authorities at NATO headquarters," he added.

Turkey expects its allies to act in solidarity, the minister added.

"We expect our allies to act in accordance with the spirit of solidarity of the alliance in line with existing procedures and principles, rather than creating an artificial agenda to serve their political goals," Akar said.

"We always favor dialogue and coordination," Akar said, adding that Turkey had acted and would act in awareness of its duties and responsibilities within the alliance.