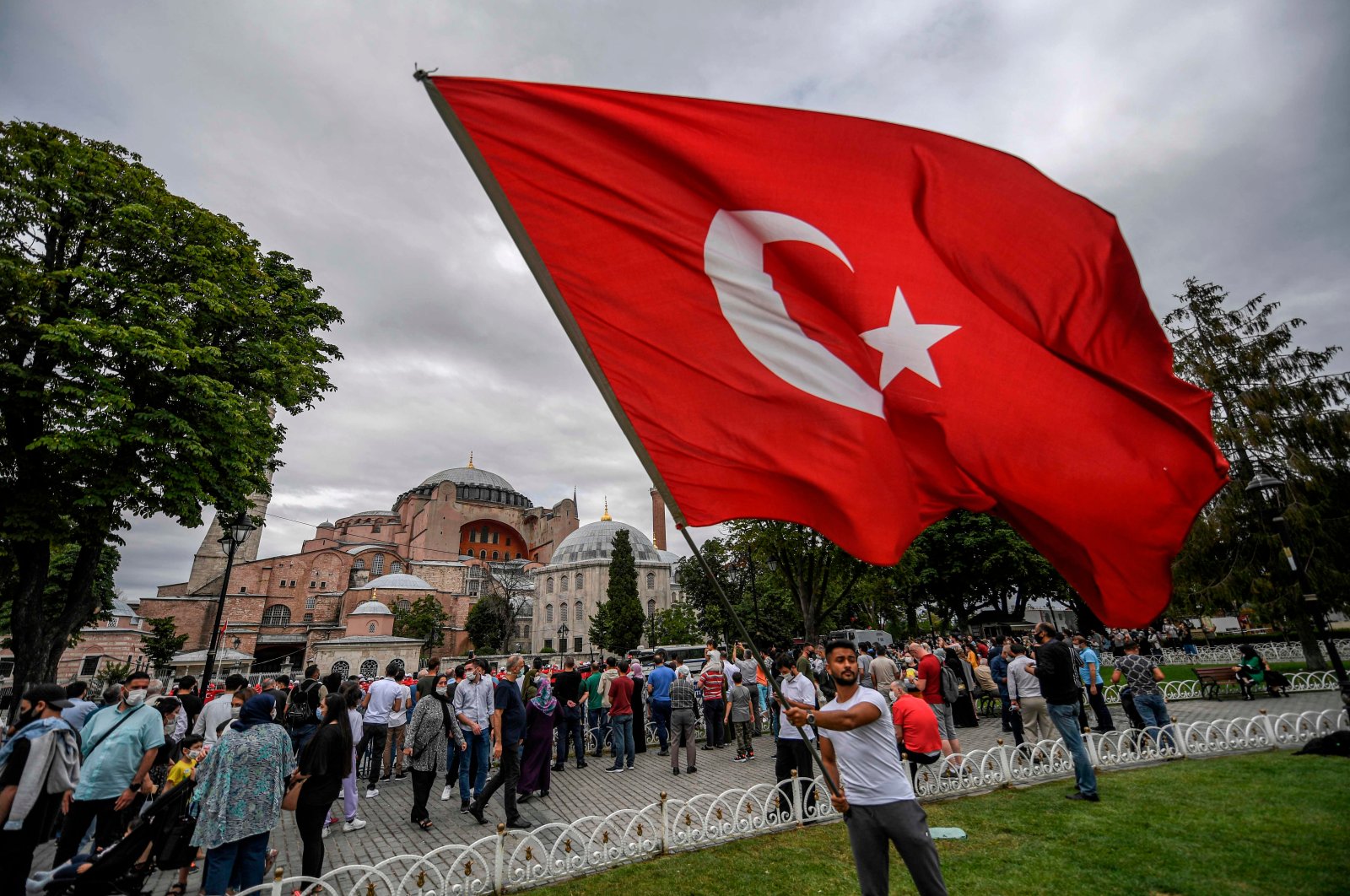 A man waves a Turkish national flag at Sultanahmet Square in front of Hagia Sophia during the fourth anniversary of the failed coup attempt in Istanbul, Turkey, July 15, 2020. (AFP)
by DAILY SABAH Jul 17, 2020 2:12 pm
Edited By Şeyma Nazlı Gürbüz
RECOMMENDED

Foreign reactions against the reversion of Hagia Sophia into a mosque are null and void, President Recep Tayyip Erdoğan said Friday.

"This is a matter of our domestic politics. No one has the right to intervene in this subject," the president said, answering the questions of the reporters following Friday prayers.

"To be honest," Erdoğan expressed, "This (the reversion of Hagia Sophia to the mosque) was our biggest dream when we were young. We are especially happy to make our dream come true."

Referring to the reversion as Hagia Sophia's freedom from chains, Erdoğan said that a group of 1,000-1,500 people will attend the first Friday prayers in the structure next week.

Speaking on the issue on Friday, Defense Minister Hulusi Akar also underlined that the sovereignty of Hagia Sophia belongs to Turkey and no other country has any say over its reversion to a mosque.

"Everyone should know their place," the minister said.

Turkey’s top administrative court last week annulled the 1934 government decree that turned Hagia Sophia into a museum. The long-awaited ruling opened the way for Istanbul’s iconic structure to be used as a mosque.

Hagia Sophia, one of the world’s most important historical and cultural heritage sites, was built in the sixth century during the reign of the Byzantine Empire and served as the seat of the Greek Orthodox Church. It was converted into an imperial mosque with the Ottoman conquest of Istanbul in 1453. The structure was converted into a museum during the strictly secular single-party rule in 1935, but there had been discussions about reverting it to a mosque, with public demand to restore it as a place of worship gaining traction on social media.

The Hagia Sophia mosque will be open to prayers on July 24. The preparations for the big day have already begun with the removal of the museum signboards and ticket sales office. Before its opening to the prayers, the structure has witnessed a massive flow of both Turkish and foreign visitors.

A group of people, on the other hand, attempted to have their Friday prayers in the structure. The security forces directed the group to the Sultanahmet (Blue) Mosque, located right across from Hagia Sophia.