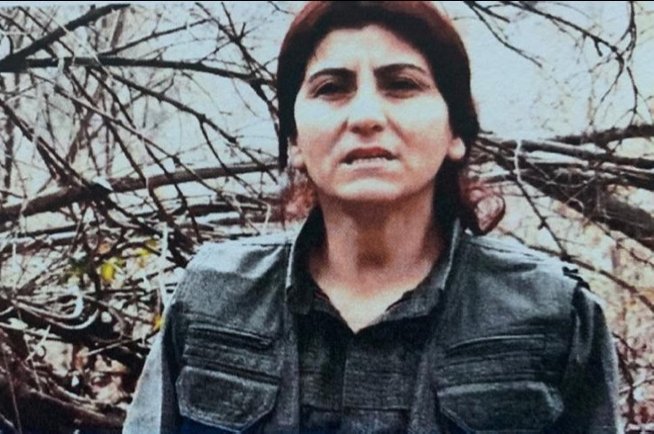 Terrorist Nazife Bilen is seen in this screen-grab from an undated PKK propaganda video.
by Daily Sabah with Wires Mar 30, 2020 10:44 am
RECOMMENDED

Bilen was one of the six so-called "executive council" members of the Kurdistan Communities Union (KCK), which serves as an umbrella body of the PKK terrorist group and its Syrian and Iranian offshoots, Democratic Union Party (PYD) and Kurdistan Free Life Party (PJAK), in addition to various armed, youth and women's organizations. The other KCK members include the notorious militants Duran Kalkan, Mustafa Karasu, Ali Haydar Kaytan and Nuriye Kesbir.

According to the sources, she was one of the first members of the female movement within the group. She received political and military training in Syria and Lebanon under the watch of the now-jailed leader of the group, Abdullah Öcalan.

The sources emphasized the importance of the operation, saying this is the first time the PKK has suffered such casualties among its women recruits in Iraq.
MİT took advantage of intelligence received from local sources over several months before the operation, the sources added.

Turkish intelligence worked on a detailed plan to prevent collateral damages and ensure that Bilen was eliminated in a single shot.

In its more than 30-year terror campaign against Turkey, the PKK – listed as a terrorist organization by Turkey, the U.S. and the European Union – has been responsible for the deaths of some 40,000 people, including women and children.