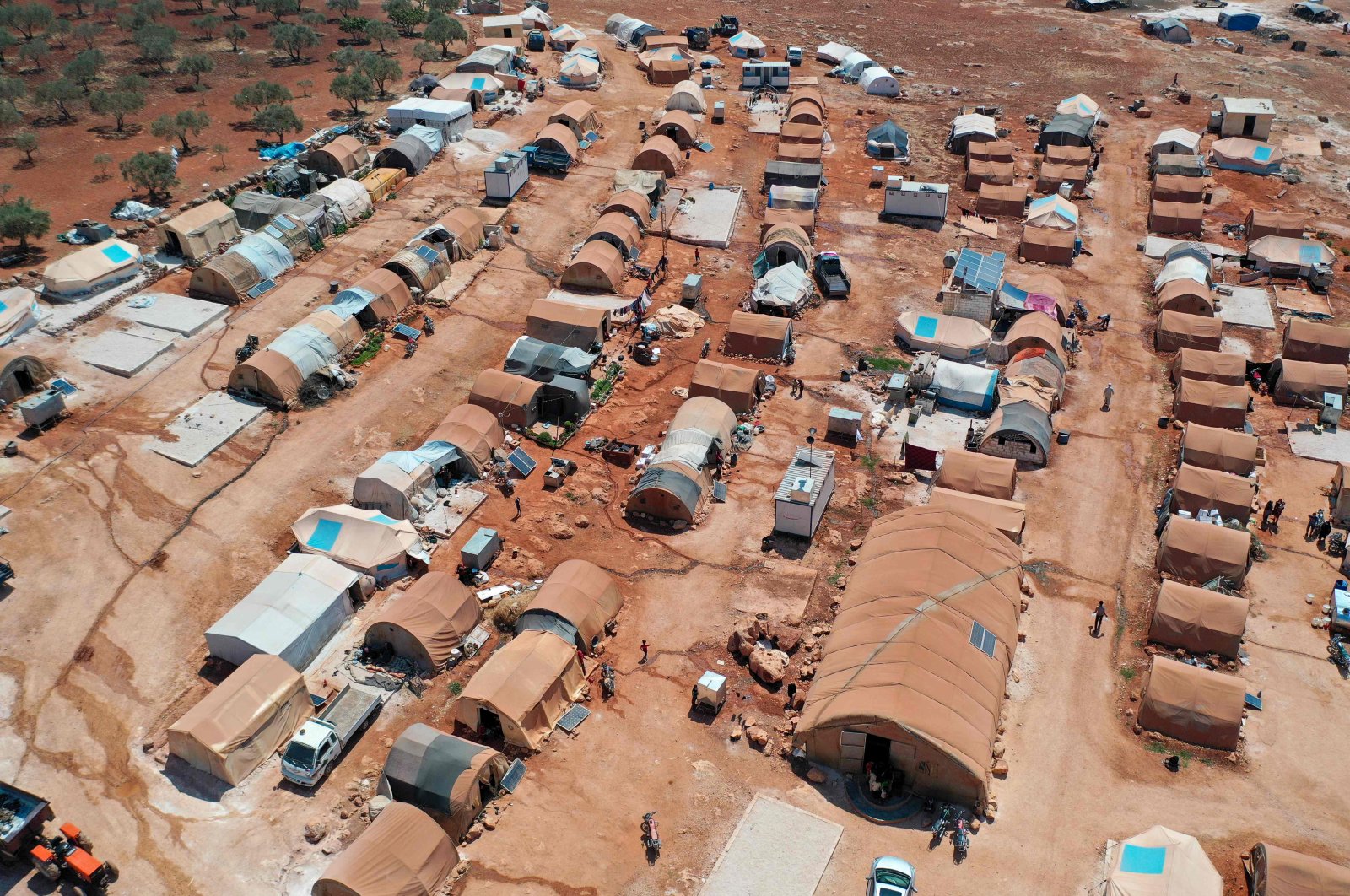 An aerial view of a camp for displaced Syrians from Idlib and Aleppo provinces, near the town of Maaret Misrin, northwestern Idlib province, Syria, July 11, 2020. (AFP Photo)
by Dilara Aslan Jul 17, 2020 12:20 pm
Edited By Dilara Aslan

In a race against time ahead of the closure of the last remaining border crossing to Syria, the world must find a solution to ensure humanitarian aid reaches Syrians in need, while Turkey once more emerges as an essential partner

The outcome of last week’s United Nations Security Council negotiations on cross-border humanitarian aid for the Syrian people was a victory for Russia and its ally, Syrian dictator Bashar Assad. As Russian maneuvering confined the delivery of supplies to a single border crossing, leaving millions of displaced Syrians vulnerable, humanitarian groups are searching for solutions beyond the Security Council resolution and Human Rights Watch (HRW) has called for Turkish cooperation.

“While it’s good that the Security Council resolution has been extended, it’s extremely disappointing that we’ve been reduced to only one crossing point (Bab al-Hawa) at the very time when COVID-19 is spreading and when we actually need more access, not less,” the U.N. regional spokesperson for the Office for the Coordination of Humanitarian Affairs (OCHA), David Swanson, told Daily Sabah.

“With only one crossing point now, we will face immense logistical challenges,” he added.

The 15-member council reduced the number of gates for aid deliveries from Turkey to Syria to one, with only the Bab al-Hawa border crossing, near the Cilvegözü crossing point, remaining open for another year.

Russia advocated ending all cross-border aid, arguing it undermined Syria’s sovereignty and that the situation on the ground had changed since the original resolution passed in 2014. U.N. operations being dependent on the regime, however, would have helped accelerate Russia’s push for the normalization of the Assad regime and undercut international efforts to foster a lasting settlement to the Syrian conflict.

Many believe Russia abused its veto power, politicized humanitarian aid and ignored both civilian lives and the spread of COVID-19 in the country's north, prioritizing political agendas over the lives of the Syrian people.

Russia has long supported Assad in his inhumane acts, as he carried out chemical attacks, tortured his own people and bombed civilian settlements.

The latest examples of these attacks occurred last Wednesday when at least one person was killed and 11 others injured as Russian warplanes conducted airstrikes on civilian settlements in northern Syria's al-Bab region.

Turkey had welcomed the extension of cross border aid to Syria upon the Security Council decision, yet voiced that “it is an unfortunate approach that this time, the Öncüpınar-Bab al-Salam border crossings, which are important elements of the mechanism, are not included in the decision.” Ankara vowed to maintain continuous humanitarian aid activities in Syria.

HRW said that the Security Council’s decision to confine official aid to northern Syria to only one crossing on the Turkish border was “the final nail in the coffin of the U.N.’s 6-year-old aid mechanism.”

“The U.N. and its member countries should immediately explore other avenues to resume cross-border aid to Syria’s northeast and parts of the northwest not in reach of Bab al-Hawa,” HRW urged in a written statement Thursday.

The calls of humanitarian groups bear special significance considering last week it was confirmed that COVID-19 had spread to the northern parts of Syria, reviving fears of disaster if the pandemic reaches migrant camps in the region.

“If U.N. member states allow Russia and the Assad government to dictate when and where aid gets in or doesn’t, COVID-19 could spread like wildfire in the event of an outbreak,” the rights group added, reminding that this is not the first time Russia has blocked Security Council action in Syria.

As Russia has used its veto 16 times since 2011 to shield the Assad regime, usually with the backing of China, HRW underlined that there are ways to get around this deadlock.

Amid rising malnutrition and food insecurity that has prompted the World Food Programme (WFP) to warn of a possible famine in Syria, humanitarian aid is essential. The U.N.'s presence also provides legal cover for many international nongovernmental organizations (NGO) operating in the country's northwest.

Swanson further stressed that needs are high for millions of women, children and men in areas not under regime control in northwestern Syria. “The lives of many people living under ongoing hostilities and prolonged periods of vulnerability depend on cross-border assistance,” he said.

Syria's war has devastated the country's economy since 2011, plunging 80% of its people into poverty, according to the U.N. For years, many stakeholders have said Assad has ignored the needs and safety of the Syrian people, only eyeing further gains of territory and crushing his opposition. With this goal, the regime has for years bombed vital facilities such as schools, hospitals and residential areas, causing the displacement of half the country’s population. The situation is especially critical in opposition-controlled areas in the northwestern provinces of Aleppo and Idlib, regions the Assad regime has vowed to take back. With almost 50% of the nation's health facilities out of service and many living in overcrowded tent camps deprived even of basic needs, the Syrian people are also extremely vulnerable to the coronavirus pandemic.

Russia appears determined to end the last remnants of cross-border aid to northern Syria, HRW said, adding that the idea of aid from Damascus was “fiction.”

Highlighting that only 12 months remain before the last border authorization expires, HRW said “Before then, U.N. member states should explore options besides the Security Council to ensure Syrians get the aid they need to survive, especially in northeast Syria. No government should withhold consent to such aid for arbitrary reasons – especially when that government isn’t in control of the territory in question.”