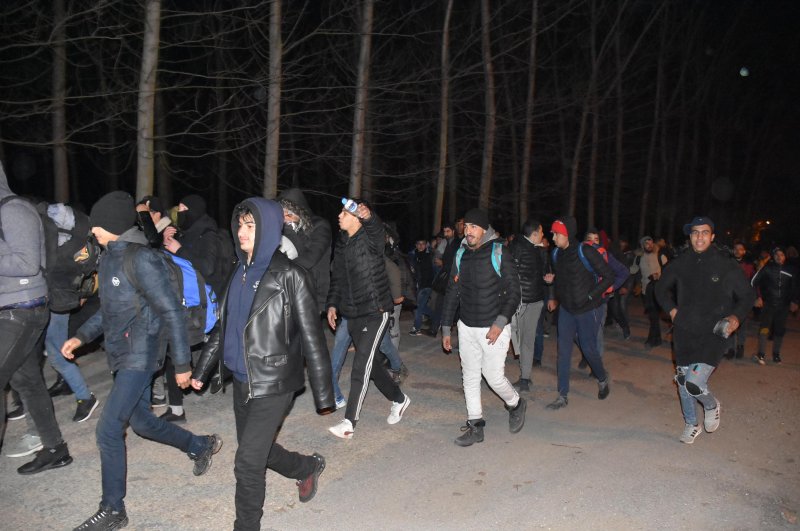 Syrian migrants who gathered in the Turkish border town of Edirne walk toward the Pazarkule Border gate to cross into Europe on Friday, Feb. 28, 2020 (IHA Photo)
by Daily Sabah with Agencies Feb 28, 2020 9:10 am

A group of migrants is walking in northwest Turkey toward its border with Greece, the Demirören News Agency (DHA) reported on Friday after Turkey announced the country will no longer stop Syrian refugees from reaching Europe.

There were around 300 migrants, including women and children, in the group which began heading toward the border in Turkey's Edirne province around midnight. Syrians, Iranians and Iraqis were among those in the group, reports said.

As their numbers grew in the morning, Greece announced that it is shutting down Kastanies/Pazarkule border gate with Turkey to prevent refugees from entering the country.

Turkish officials announced that the security forces will not intervene to prevent the crossing of any migrants, including those from Syria and other countries like Afghanistan and Iran. Turkish police, coast guard and border security officials have been ordered to stand down following the attack that killed 33 soldiers in Idlib, where nearly four million people live in dire humanitarian conditions.

Turkey has been telling European and other countries that it will not be able to handle another wave of migrants as it already hosts over 3.7 million, and officials have been criticizing them for remaining indifferent to the calls and the dire humanitarian situation in northwestern Syria.