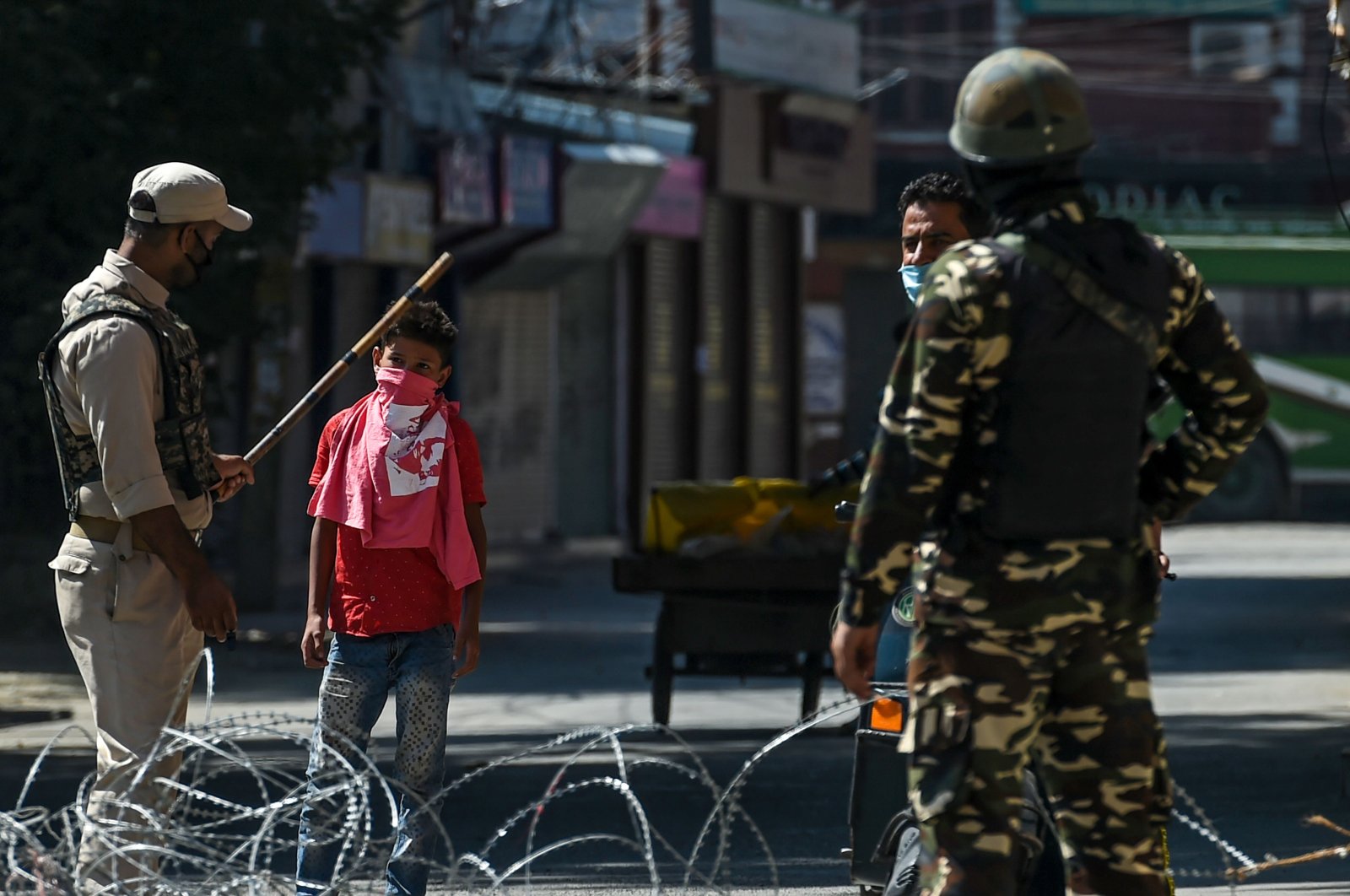 Security personnel stop pedestrians on a street during a lockdown imposed by the authorities as a preventive measure against the surge in COVID-19 coronavirus cases, in Srinagar, July 23, 2020. (AFP Photo)
by DAILY SABAH WITH AA Jul 24, 2020 11:34 am
RECOMMENDED

Police forces in India-administered Kashmir are questioning Kashmiris who recently traveled to Turkey, as several individuals have been subjected to inquiries recently.

As the Anadolu Agency (AA) reported this week, the grandniece of the second prime minister of the erstwhile Jammu and Kashmir state, Shazia Bakshi, wrote on Twitter that she, her 72-year-old mother and 9-year-old niece were asked to visit a police station to answer questions. The trio had traveled to Turkey for five days in 2017.

Shazia wrote that according to an officer from the Crime Investigation Department (CID) who visited her home, it was a "routine check" on all travelers who visited Turkey as "relations are now bad between India and Turkey."

Journalist Aakash Hassan told AA that police from the CID visited his home Wednesday in a village in Anantnag district and asked his parents about his whereabouts.

"My mother told him I work in Srinagar. I then received a call. The caller said he was from the CID. He asked me about a lot of things like travel details, why I had been to Turkey, whether there has been a militant in my family, whether I have been detained for stone-pelting. In fact, they had inquired about me from the village head also," he said.

"What struck me in this questioning was that they asked whether I was a Hanafi or a Salafi. I jestingly told them ‘I don't know myself what I am,' but he said ‘No, you must be one of the two,'" said Hassan.

In January, Hassan enrolled in the master's program in political science at Istanbul Zaim University but returned after regular classes were suspended because of the COVID-19 pandemic.

A Kashmiri man working in Ankara, who requested anonymity for fear of reprisals, said police visited his home in Srinagar and questioned him.

"What I have been doing in Turkey, my educational background, whether I was affiliated with any pro-freedom organization and other staple questions Kashmiris are routinely asked by Indian agencies," he said.

On Wednesday, Sobia Bhat, a Kashmiri student, wrote on Facebook: "Why are they calling everyone who has visited Turkey in the last few years for an enquiry to the local police stations? Some of my friends got a call last week and today it was me. Are they scared of Ertugrul Ghazi's title song?"

When AA contacted Sobia, she said her father had gone to the local police station to answer on her behalf.

"They have asked him to submit a copy of the invitation letter that I had received from the organization which had invited me for a workshop. Also, a photocopy of my passport. They even inquired about my college bank account details. My dad had to sit there for more than an hour," said Sobia, who is pursuing a Ph.D. at South Asian University, New Delhi.

A senior intelligence officer with Jammu and Kashmir police told on condition of anonymity that authorities were creating a database of Kashmiris who have traveled to foreign countries.

"It is a benign exercise. People are being called to police stations only to cross-check information," he said, adding at present, visitors to Turkey are being questioned.

More than 7,300 Kashmiris were arrested and jailed in various Indian states since August. Most have been released. Three journalists have been booked under an anti-terror law for social media comments and reporting police went against rules. Two others have been questioned for their reporting.

Erdoğan told the Pakistani parliament that there was "no difference between Gallipoli and Kashmir." The battle of Gallipoli was fought between allied powers and the Ottoman Empire.

"Turkey will continue to raise its voice against the oppression. The troubles our Kashmiri brothers have suffered for decades have been exacerbated by the latest unilateral steps," Erdoğan said, triggering a sharp response from New Delhi.

In his address to the United Nations General-Assembly last year, Erdoğan also criticized the international community for failing to pay attention to the 72-year-old problem.

The Kashmir dispute, one of the oldest on the agenda of the U.N. Security Council, erupted between India and Pakistan in 1947. The Security Council called for a referendum to decide the region's fate in 1948. While India says elections held in territories controlled by an administration that is backed by New Delhi decided to support accession to India makes a referendum unnecessary, the U.N. and Pakistan say a referendum needs to take into account the views of voters throughout the former princely state.

Jammu and Kashmir are currently in part held by India and Pakistan and claimed by both in full. A small sliver is also held by China. Since they were partitioned in 1947, the two countries have fought four wars – in 1948, 1965, 1971 and 1999 – three of them over Kashmir. India has about 500,000 soldiers deployed in its half of Kashmir, where separatists have for decades been fighting for independence or a merger with Pakistan.