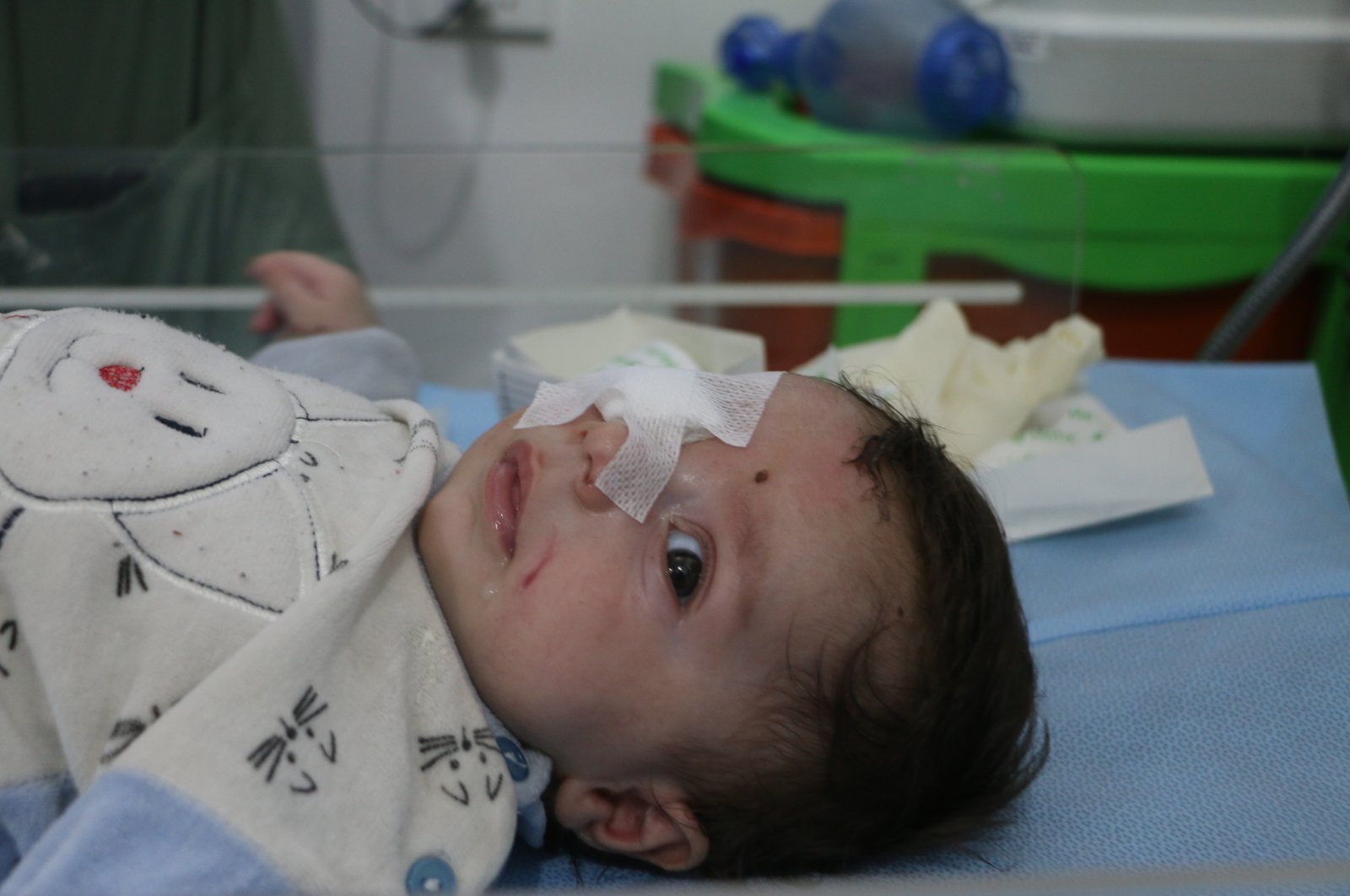 A Syrian infant has lost his right eye as a result of an attack by Bashar Assad troops in northwestern Syria's Idlib province, becoming one of millions of innocent children whose lives have irreversibly changed under the brutal regime's rule.

Two-month-old Abdurrahman's right eye was heavily injured when a rocket fired by regime forces struck his family's home. The attack took place a few days before the cease-fire was declared on March 5. A piece of shrapnel hit the infant's eye, causing irreversible damage. The family immediately took Abdurrahman to Babülhava Hospital near the Turkish border. Although the doctors managed to save the infant's life, his right eye could not be saved, despite all efforts. Instead, doctors have installed a prosthetic eye.

Abdurrahman's family also lost their house to the regime's attacks and are now awaiting humanitarian assistance. Speaking to Anadolu Agency (AA), the infant's father, Zahir Cabi said that five years ago, in the same house where Abdurrahman was injured, he lost his mother to another regime attack. The aggrieved dad described the incident that injured his baby as follows:

"I was out to bring wood to the stove. then, the rockets started to fall down. I opened the door of the house, and everything was burnt out. I asked my wife 'Are you okay?' She told me she was fine, but Abdurrahman's head was bleeding. I immediately took Abdurrahman to the hospital," Cabi said.

"They looked at his condition and informed me that it was not very promising. They transferred us to Babülhava Hospital near the Turkish border. As a result of the X-ray, it was revealed that there were two cracks in his head, as well as injuries and bleeding. Doctors treated him and managed to stop the bleeding. However, his eye remained injured," he added.

After the treatment, doctors asked Cabi for his permission to remove Abdurrahman's injured eye.

"At first, I could not find the courage to sign the papers. I did not know what to do because of my sorrow. However, at the same time, I was thankful to God and consoling myself since my son was still living, despite everything. They provided me a date for the operation. After an operation that lasted almost one and a half hours, they informed me that the procedure was done," he said.

The manager of the hospital where Abdurrahman was treated said the child's eye could not be saved despite doctors' efforts because of the severity of the injuries. "The eye was heavily damaged. We could not save it. Our doctors had to remove Abdurrahman's eye," said Dr. Mahmut Kaddah.

Stating that the overall health condition of the baby is well, the doctor said the hospital has been treating many children injured by the regime's attacks. Children are among the biggest casualties of the civil war in Syria. That's a trend Abdurrahman's father hopes will end soon. "I wish for Abdurrahman to be the last child who was injured by the regime attacks," he said.

"Five years ago, my 60-year-old mother became the victim of regime attacks. Now, my 2-month-old son. Both were innocent. I wish for these attacks to come to an end now," Cabi said.

“The war in Syria marks yet another shameful milestone today,” said in a press release on the instiution's website, UNICEF Executive Director Henrietta Fore, who was in Syria last week. “As the conflict enters its 10th year, millions of children are entering their second decade of life surrounded by war, violence, death and displacement.”