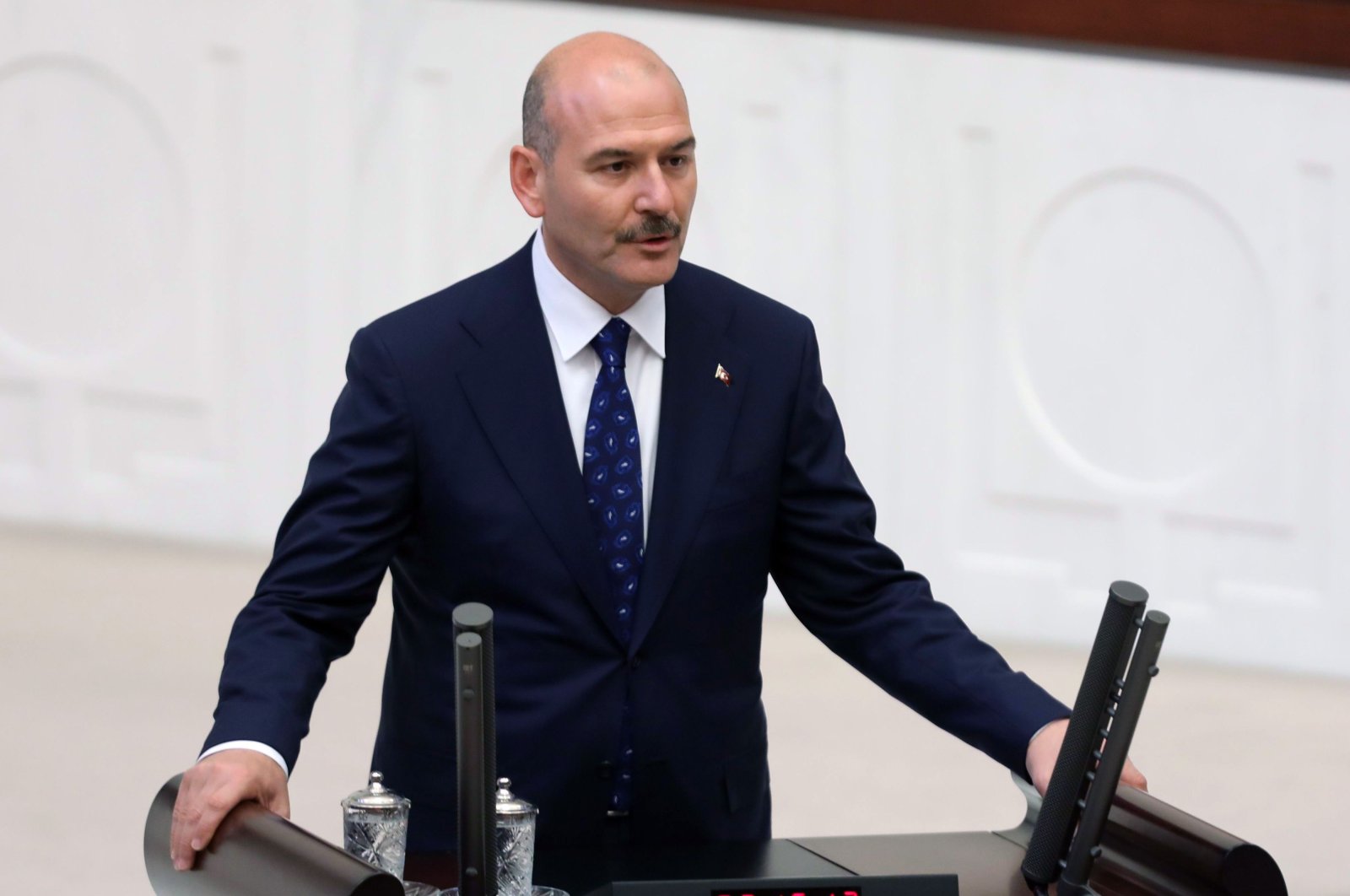 Interior Minister Süleyman Soylu, whose resignation was rejected by President Recep Tayyip Erdoğan on Sunday, said he’s humbled by the support of the nation and the president, as he pledged to “continue to work in the service of the nation” in his first remarks following the incident.

In a statement on his official Twitter account posted Monday, Soylu said he is "humbled" by the response of the people and the president, who supported him after he announced his resignation.

He noted that the fact that he's been given a second chance to fix his mistake has multiplied his responsibility, as he pledged to continue to serve the nation.

“It would be irresponsible to be indifferent to what has happened Friday night,” Soylu told broadcaster A Haber on Monday, as he noted that messages sent on Twitter, especially those by children of martyrs, have touched him.

“Their messages really touched my heart, and I am fascinated by the fact that our nation did not doubt my good intentions,” Soylu said.

He continued by thanking National Movement Party (MHP) Chairman Devlet Bahçeli, who also opposed his resignation. Soylu reportedly held a phone call with Bahçeli and thanked him for acting responsibly and highlighting responsibility as the country goes through such a critical period. In return, Bahçeli said he was pleased that Soylu would continue to serve as the interior minister and pledged to continue to support him.

Many people, including politicians, celebrities and the public, opposed Soylu's resignation, noting that he is qualified for his position and has been successfully carrying out his duties.

Turkish singers Demet Akalın, Alişan Yusuf Güney and Sinan Akçıl, as well as others, urged the minister to continue to serve the country, as they praised his professionalism and success as the interior minister.

Tens of thousands of users on Twitter and other social media outlets also opposed Soylu's resignation, calling on President Erdoğan to reject his resignation and using hashtags including #istifanıkabuletmiyoruzSoylu (we don’t accept your resignation Soylu), #SüleymanSoylu, #SensizOlmazSoylu (can’t do without you Soylu) and #suleymansoyluyalnızdegildir (Süleyman Soylu is not alone), which began trending in a matter of hours and attracted tens of thousands of messages in support of Soylu.

After Erdoğan’s rejection of Soylu’s resignation, hundreds of people showed their relief by going out on their balconies and celebrating by chanting and clapping for the interior minister.

The Presidential Communications Directorate issued a statement following Soylu's resignation, indicating that the president did not accept the resignation, and therefore, Soylu will continue his duties.

"Süleyman Soylu, who was appointed as the minister of the interior immediately after the July 15 coup attempt, has gained the appreciation of our nation with his successful work so far," the statement said.

The statement praised Soylu for his role in significantly reducing the capacities of terrorist organizations in Turkey, as well as his work coordinating response efforts to natural disasters, such as earthquakes.

It also noted the success of the interior minister over the last month in managing the coronavirus outbreak, ensuring that there were no problems with public security and that anti-virus efforts were carried out successfully.

Soylu resigned Sunday evening over an announcement Friday night of a weekend curfew, after which about 250,000 people flooded shops and bakeries across Turkey.

Turkey has imposed restrictions on daily life in an effort to slow the spread of COVID-19. Though an early response to the crisis has stemmed the number of those infected, the country has had mixed success in limiting public mobility, especially on weekends and given rising temperatures.

Soylu became the sixth interior minister serving with the Justice and Development Party (AK Party) government, excluding those bureaucrats who served for interim periods in accordance with Turkey's election laws. He replaced Efkan Ala on Aug. 31, 2016, and is also a deputy chairman of the AK Party.

Soylu has a business background, contrary to general tradition, as those chosen usually have a police or civil administration background.

Before joining the AK Party in 2012, Soylu was the chairman of the center-right Democratic Party, between 2007 and 2009, and held the post for labor and social security after Nov 24. 2015.

His efforts during the July 15, 2016, failed coup attempt by the Gülenist Terror Group (FETÖ) were praised by many. He was not afraid to raid the headquarters of Turkey’s public broadcaster TRT when FETÖ putschists attempted to capture it and successfully cleared it with the support of the people.

He adopted a determined fight against FETÖ, and several investigations have been launched to capture FETÖ members who infiltrated state institutions.
His decisive attitude regarding anti-terrorism operations against all terrorist organizations has also been welcomed.

Under Soylu, Turkish security forces have successfully eliminated PKK terrorists across the country in numerous operations, including Operation Kıran, Kapan, and cross-border operations in northern Iraq and Syria.

In its more than 30-year terror campaign against Turkey, the PKK – listed as a terrorist organization by Turkey, the U.S. and the European Union – has been responsible for the deaths of 40,000 people, including women, children and infants. The YPG is the PKK's Syrian branch.

Soylu has especially taken a harsh stance against pro-PKK Peoples’ Democratic Party (HDP) municipalities that have been providing assistance to the PKK terrorists.

The HDP has been criticized for transferring taxpayer money and funds to the PKK, a globally recognized terrorist group. HDP mayors and local officials have been found to misuse funds in support of the PKK terrorist group and provide jobs to PKK sympathizers.
Its mayors have also been accused of undermining municipal services, allowing the PKK to dig ditches in the streets and launch attacks on police and soldiers when the terrorist group adopted an urban warfare strategy in July 2015 and ended a two-year reconciliation period. HDP municipalities and their staff were also found to be actively participating in terrorist attacks launched after July 2015.
As a result, Turkey removed the elected administrations of at least 93 municipalities in the region for their links to the PKK terrorist group and appointed trustees to these municipalities in 2016 in the aftermath of the coup attempt launched by (FETÖ).
Municipalities run by the HDP helped terrorists in various towns and cities dig trenches and erect barricades, which were manned by local sympathizers and young people. Mainly deployed in the southeastern Diyarbakır, Şırnak and Mardin provinces, this strategy led to the destruction of entire neighborhoods in clashes, with the most damage inflicted on Şırnak's city center and in the districts of Sur, Cizre and Nusaybin.
However, the strategy collapsed because of successful anti-terrorist operations and the lack of cooperation from the people in the region. The cities suffered significant damage during the operations. Since then, the government has invested huge amounts of money to restore infrastructure and public services in the region.