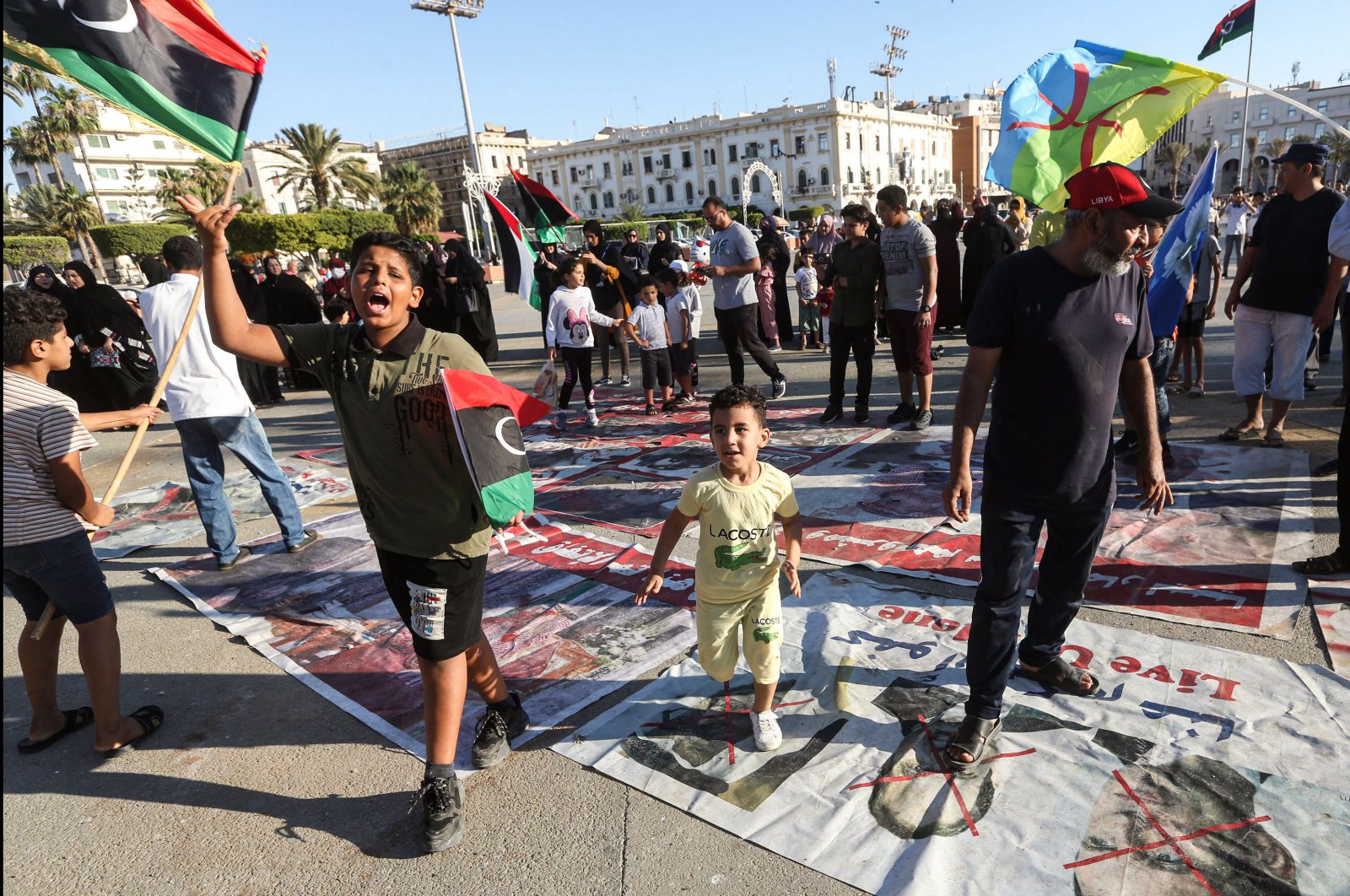 Italy, Germany and the U.S. pushed Monday for a cease-fire and de-escalation of tensions in Libya following a warning by Egypt that it would intervene militarily if Turkish-backed forces attack the strategic city of Sirte.

Italian Foreign Minister Luigi Di Maio and his German counterpart, Heiko Maas, said after talks in Rome that a cease-fire is urgent given the Egyptian threat. Di Maio also called for the quick naming of a new United Nations envoy and the strong enforcement of a U.N. arms embargo on Libya.

"If we stop the arrival of weapons, or strongly reduce them, we will be able to reduce the aggressiveness of the Libyan parties in this conflict," Di Maio said.

Egyptian President Abdel-Fattah el-Sissi warned over the weekend that any attack on Sirte or the inland Jufra air base by Turkish-backed forces loyal to the U.N.-supported Government of National Accord (GNA) in Tripoli would amount to crossing a "red line."

He said Egypt could intervene militarily to protect its western border with the oil-rich country and to bringing stability – including establishing conditions for a cease-fire.

The Tripoli-based government said it considered el-Sissi's comments a "declaration of war," while illegitimate forces in the east welcomed his support.

The German foreign minister said the Egyptian threat indicated that a further escalation was possible, making it "all the more urgent to agree on a cease-fire now."

Di Maio, for his part, said Italy was prepared to provide even more contributions to a naval and air mission to enforce the U.N. arms embargo on Libya, saying it will be crucial even after a cease-fire is signed.

"In the coming days, we will have talks with the Libyan parties to try to bring forward as soon as possible the signing of a cease-fire," Di Maio said. "Even once there is a cease-fire, I think the (arms embargo) mission will continue to be important because especially with a cease-fire, we have to limit the arrival of weapons in Libya."

U.N. spokesman Stephane Dujarric also told reporters Monday that the world body's search for a new U.N. envoy to Libya ran aground when the Trump administration blocked two of the secretary-general's nominations, saying it wants one senior official solely tasked with negotiating a cease-fire and another running the U.N. mission.

Acting U.N. envoy Stephanie Williams continues to shuttle between the warring sides and their foreign backers, he said, urging a de-escalation and resumption of the U.N.-facilitated political process.

US officials meet with Sarraj

It said the two U.S. officials stressed the "need for military pause and return to negotiations."

"All sides need to return to U.N.-led cease-fire and political negotiations because this tragic conflict is robbing all Libyans of their future,” Townsend said.

Norland called for foreign countries supporting Libya’s rivals to stop "fueling the conflict, respect the U.N. arms embargo, and uphold commitments made at the Berlin Summit" earlier this year.

The two U.S. officials arrived at Zuwara Airport, about 120 kilometers (100 miles) west of Tripoli, for the meeting.

They held talks on "joint coordination between the GNA and AFRICOM for the fight against terrorism in the framework of the strategic cooperation between Tripoli and Washington," the GNA said.

The U.S. visit came days after AFRICOM said it had proof of Russian military planes active in Libyan airspace using air bases at Jufra and Sirte east of the capital.

Another call for a truce in Libya came from Moscow on Tuesday. Russia's Foreign Minister Sergey Lavrov called for an immediate cease-fire, adding that Turkey and Egypt agreed with Moscow's approach to the settlement of that conflict.

Lavrov said all external players should create conditions for inclusive dialogue between the warring factions in Libya, something that Turkey and Egypt also agreed with, after Lavrov held talks by phone with the foreign ministers of those countries.

Libya has been in turmoil since 2011, when a civil war toppled long-time dictator Moammar Gadhafi, who was later killed. The country has since split between rival administrations in the east and the west, each backed by armed groups and foreign governments.

Eastern-based forces under putschist Gen. Khalifa Haftar launched an offensive to try to take Tripoli last April. Haftar’s forces are backed by the United Arab Emirates (UAE), Egypt and Russia, while the Tripoli-allied forces are aided by Qatar, Italy and Turkey.

France is also suspected by analysts of backing Haftar but insists it is neutral in the conflict.

On Monday, French President Emmanuel Macron accused NATO member Turkey of playing a "dangerous game" with regard to Libya which could threaten the whole region and added he could understand el-Sissi's "legitimate concern."

In response, the Turkish Foreign Ministry stated Tuesday that France’s attitude ignoring Turkey’s legitimate rights in the Eastern Mediterranean and supporting maximalist ambitions hampers peace and stability while raising tensions in the region.

The ministry further urged Macron to end steps risking security and the future of Libya, Syria and Eastern Mediterranean, and instead to use established dialogue channels.

“French President Emmanuel Macron calling Turkey’s support for the legitimate government in Libya a ‘dangerous game’ can only be explained with the abdication of reason,” the statement of the ministry said.

"France has a major responsibility for Libya being dragged into chaos by supporting illegal structures there for years, and therefore, it is actually France which is playing a dangerous game in Libya," it added.

Tensions have risen over the last year between Paris and Ankara, notably when the French leader said the lack of NATO response to a Turkish anti-terror operation in northern Syria showed the alliance was undergoing "brain death."

The Ankara-Paris strains soared further last week when France denounced an "extremely aggressive" intervention by Turkish ships against a French Navy vessel participating in a NATO mission in the Mediterranean, a claim Ankara dismissed as "groundless." Macron described this as fine proof of his concern for NATO.

Tripoli-based forces with Turkish support gained the upper hand in the war earlier this month after retaking the capital’s airport, all main entrance and exit points to the city and a string of key towns near Tripoli. They also aim to retake Sirte, which could allow them to gain control oil fields and facilities in the south that Haftar seized earlier this year as part of his offensive on Tripoli.

With the recent retreat of Haftar's forces from their last western stronghold of Tarhuna and the discovery of several mass graves in the area, calls have mounted for a transparent investigation into possible war crimes. Fatou Bensouda, the International Criminal Court prosecutor, said Monday that her office had received credible reports of 11 mass graves containing men, women and children.

In Geneva, the U.N.-backed Human Rights Council agreed unanimously on Monday to call for the immediate creation and deployment of a one-year fact-finding mission to document rights abuses and violations in Libya since 2016.

The 47-member-state body asked the U.N. human rights chief, Michelle Bachelet, to appoint experts for the mission and called on Libyan authorities to grant “unhindered access” to the country and the right to speak with anyone they choose.

Eric Goldstein, acting Middle East and North Africa director at Human Rights Watch, welcomed the step as “a wake-up call to warlords and armed groups that they could be held accountable for serious crimes committed by their rank and file.”