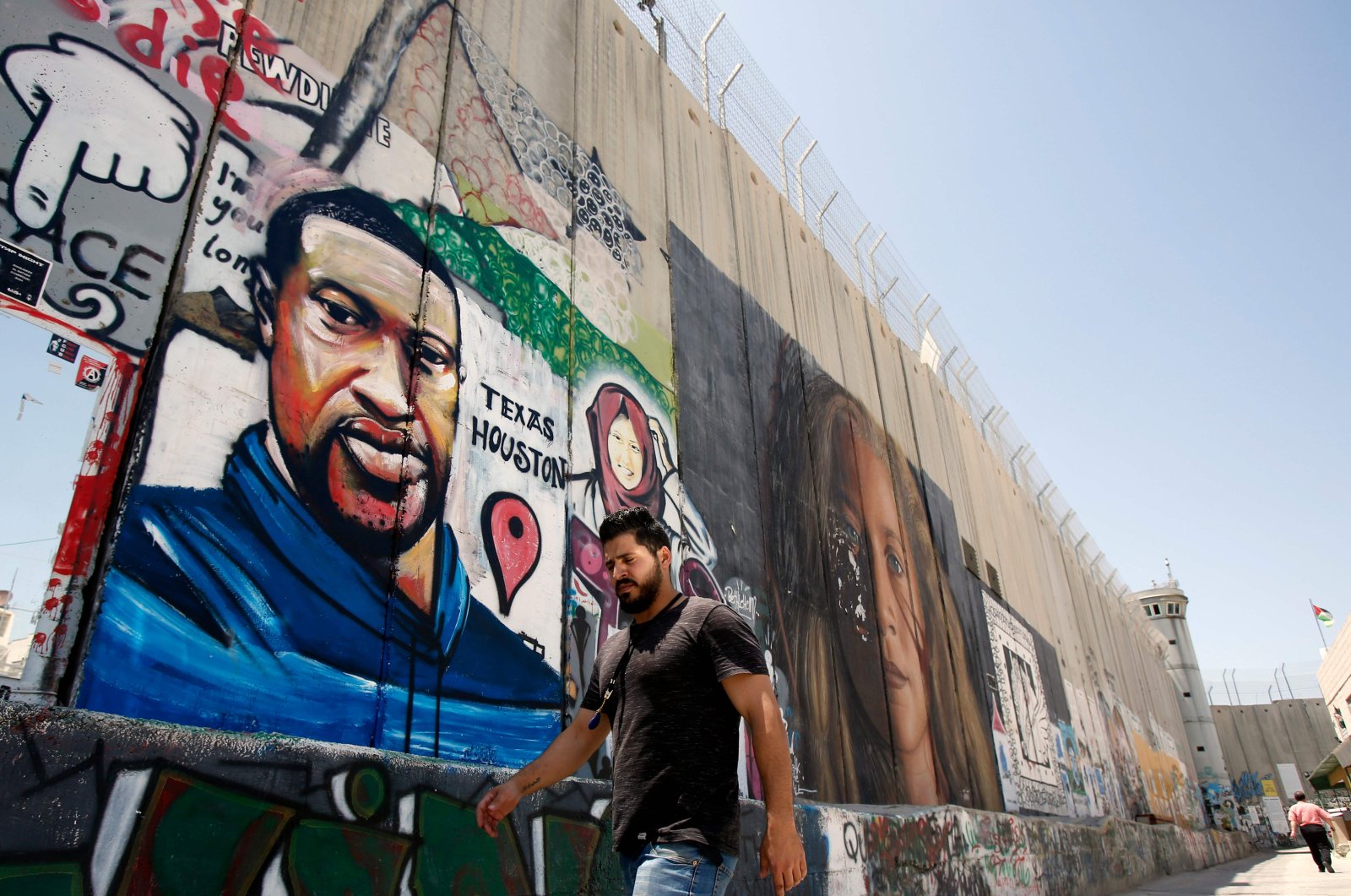 A Palestinian man walks past graffiti of George Floyd, an unarmed black man who died after a white policeman knelt on his neck during an arrest in the U.S., painted on a section of Israel's controversial separation barrier in the city of Bethlehem in the occupied West Bank, June 7, 2020. (AFP Photo)
by DAILY SABAH WITH AA Jun 10, 2020 5:58 pm
RECOMMENDED

“This will destroy all hopes for lasting peace in the Middle East,” Foreign Minister Mevlüt Çavuşoğlu said late Wednesday regarding Israel’s plans to illegally annex the West Bank – territory recognized by the United Nations as belonging to a Palestinian state.

"If the occupying power (Israel) crosses the red line, we (Muslim countries) must show that this will have consequences," Çavuşoğlu said speaking at the Organisation of Islamic Cooperation (OIC) Executive Committee Extraordinary Ministerial Meeting on Israeli threats to annex parts of Palestine.

The virtual open-ended meeting held at the ministerial level aims to discuss the threat posed by Israel's plan to annex parts of the Palestinian West Bank, which has been under its occupation since 1967.

Çavuşoğlu thanked the OIC General Secretariat for organizing the meeting initiated by Turkey at the request of Palestine. He also expressed his gratitude to Jordan for its cooperation in the matter.

He underlined that the meeting had gathered top officials to send a clear warning to Israel to end its illegal annexation plans and to show that Muslim countries were in full solidarity with Palestine.

"The annexation of the Jordan Valley by Israel and illegal settlements would be a violation of international law," he said, adding that this would end the two-state vision and replace it with a single-state solution that would turn Israel into a "racist" state.

Çavuşoğlu stressed that the suffering of the Palestinian people would increase in the hands of the occupying power.

"To prevent this result, we must demonstrate unity and shared position."

The minister also called on Muslims to show that it is time to put ethical values ahead of political interests.

He said Israel must understand that Muslims and Palestinians will never give up a desire for the independent Palestinian state, with Jerusalem as its capital.

Çavuşoğlu called on Muslims to unite in the face of Israel's illegal attitude.

"Our strength comes from our unity, and as long as we act together, we can make a difference. Today, we must once again give our message to the world openly and clearly. We must once again lead the international community against Israel's illegal actions," he said.

Underlining the importance of the Palestinian President Mahmoud Abbas' statement made on May 19, Çavuşoğlu said Muslims must support the road map led by Palestine both verbally and practically.

Drawing attention to international coordination, he said Muslim countries must coordinate and maintain close contact with other members of the international community to prevent Israel's aggression.

After his speech, Çavuşoğlu wrote a message on Twitter, reiterating Turkey's support to all Palestinians.

"At @OIC_OCI Executive Committee Meeting held upon our initiative, (I) emphasized Turkey's full support to our Palestinian brothers&sisters against Israel's blatant annexation plans," he said.

He also added that the Muslim Ummah will never give up on a sovereign Palestinian state with Jerusalem as its capital.

Israeli Prime Minister Benjamin Netanyahu had announced that his government intended to annex the Jordan Valley and all settlement blocs in the West Bank early next month.

Palestinian officials have threatened to abolish bilateral agreements with Israel if it goes ahead with the annexation, which would further undermine the two-state solution.

The annexation comes as part of U.S. President Donald Trump's "deal of the century," which was announced on Jan. 28. It refers to Jerusalem as "Israel's undivided capital" and recognizes Israeli sovereignty over large parts of the West Bank.

The plan states the establishment of a Palestinian state in the form of an archipelago connected through bridges and tunnels.

The Israeli annexation plan has drawn international condemnation and outrage.

Most recently, German Foreign Minister Heiko Maas said Wednesday that Israel's annexation of the West Bank will be a violation of international law.