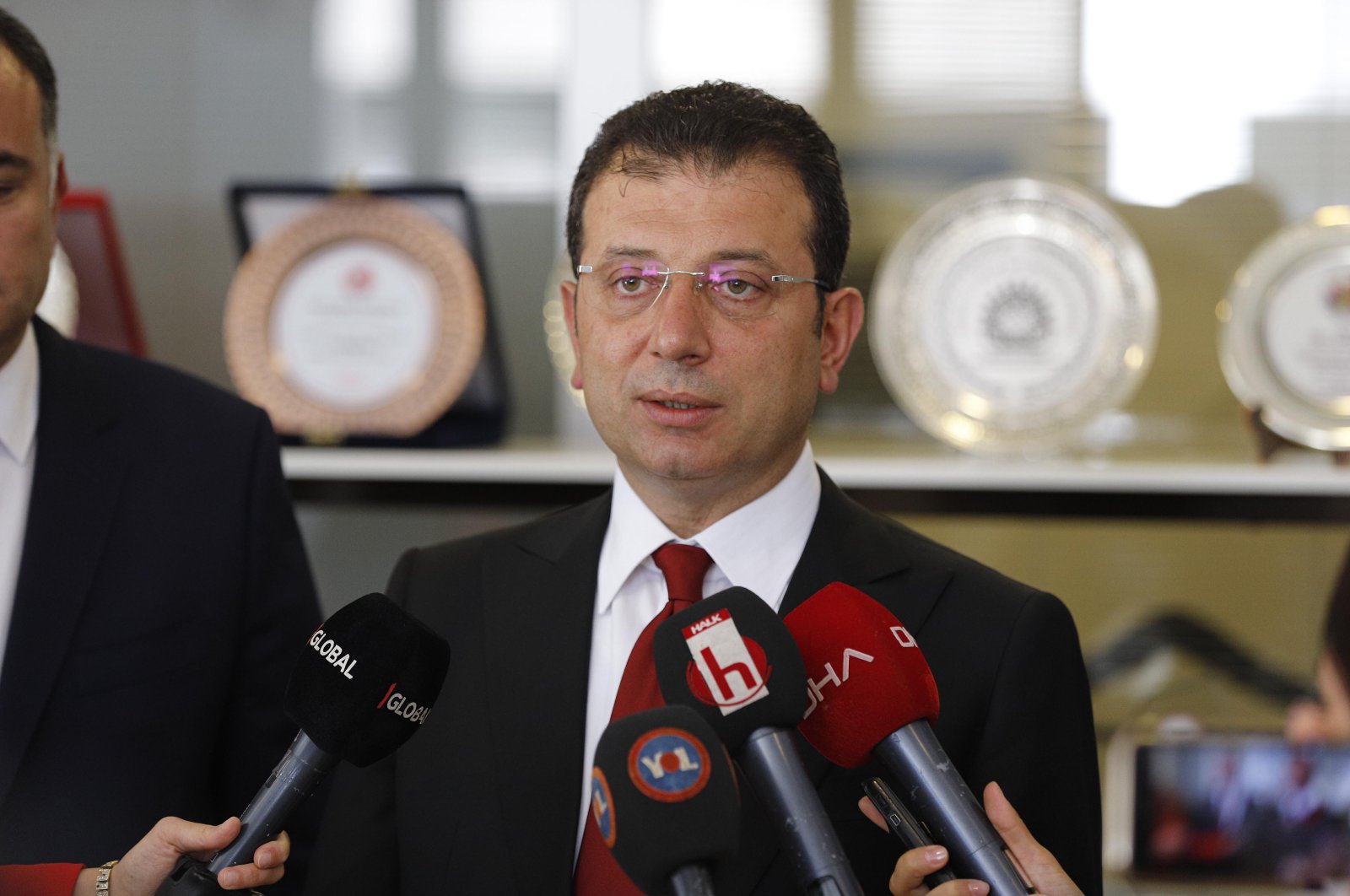 Istanbul Mayor Ekrem Imamoğlu of the CHP is facing severe criticism for 'wasteful' spending of the municipality's budget, while circles in the opposition party deny such claims

Istanbul Metropolitan Municipality (IBB) continues to be a hot topic on social media in Turkey as the city's recent expenditures have made the headlines for being excessive.

A recent audit report of the IBB, covering the past year's work, revealed that the mayor of the municipality, Ekrem Imamoğlu, hosted a group of financial managers from the U.S. at a dinner, of which the date and purpose were not recorded. The report showed that TL 28,211 ($4,115) of the IBB's budget was spent for 25 people during this dinner, meaning that TL 1,128 was spent on each person.

Regarded as excessive by many pundits, the cost of the dinner was met by a strong reaction on social media.

One user directly addressed Imamoğlu, asking, "I believe you promised to not waste anything (during the election process). How does this fit with your promise now?"

"Any expenditure from the people's money is a waste, a sin," another user highlighted.

In his election campaign, Imamoğlu used effective campaigning strategies and made bold promises that seemed to appeal to the majority. He pledged to keep the prices of services provided by the municipality low and offer discounts by utilizing funds and resources, fight poverty in the city, cut municipal overspending, not fire any municipal staff and embrace all citizens irrespective of their background.

Now, a year after his election, Imamoğlu seems to have broken most of these promises by ramping up prices of some vital services, firing over 1,000 staff and embracing extravagance, to the disappointment of many voters.

Another lavish dinner also elicited the scorn of social media users, in which TL 6,395 of municipality money was spent on each of the 11 mayors of the main opposition Republican People's Party (CHP) in attendance. The dinner was also bashed by the ruling Justice and Development Party (AK Party) for being wasteful.

"I am asking you, how do you define the waste? Is there any other waste bigger than this?" Mehmet Tevfik Göksu, the mayor of Istanbul's Esenler district and group deputy chairman of the AK Party in the IBB's assembly, asked.

"(During the one year of Imamoğlu's mayorship,) we saw that the IBB mayor has his own definition of waste and is quite capable of being wasteful himself," Göksu highlighted.

“It is not possible to have a definite judgment about the actions of a municipality in only one year,” Göksu said in an interview with Daily Sabah. “However, we can judge it based on its values and actions.”According to Göksu, when it comes to İBB, one can evaluate it based on three principles: sincerity, intention to work and capability, which can all be helpful in predicting the municipality’s future.“What is sincerity?” he asked. “It is the difference between what someone promises and what he or she actually does in the end. What İmamoğlu has promised before? He said he will not fire a single soul. What has he actually done? So far, he has fired 11,706 people, while hiring 18,000 others. This means that you are not sincere.”“Similarly,” Göksu continued, “he promised to hold transparent tenders. However, out of 255 tenders that the municipality had in a year, only five of them were held in the open while three of those five were also canceled in the end. This is pure insincerity. When we had the municipality, we had debt worth TL 26 billion. Now, it increased by TL 4.5 billion. This means that they are not only insincere but also they do not have the intention to work as well as the lack of capability.In Göksu’s opinion, in the end, İBB is now a municipality that has not kept its promises and does not have a clear direction for Istanbul’s future.

According to the audit report, there has been a 68.46% increase in the food expenditures of the municipality over the past year, reaching TL 956,915,000.

Imamoğlu's mayorship has been full of polemics and debates, mostly based on the municipality's budget and how it handles the monetary flow. In one of the most recent incidents, in April, Imamoğlu came under fire for his overpriced food aid campaign during the COVID-19 pandemic, as the actual cost of the package was much lower than the requested price. The food package in question was sold for TL 150, but it cost around TL 83 to TL 104 in Turkish supermarkets. Upon criticism, IBB Spokesman Murat Ongun said that the package also included a “hygiene package” that had not been specified in the details of the aid package.

Yet, all these reports, uncovering the excessive expenditures of the municipality, seem to be overlooked by the CHP authorities so far, despite massive public reaction.

On July 16, an IBB assembly member Cemal Sataloğlu gave a speech in assembly meeting on the audit report, defending the results while claiming that the areas that seem "problematic" are caused by the fact that the existing budget was determined by the previous administration of the municipality, which belonged to the AK Party.

Underlining that the report proves that IBB has been welcoming to public needs while presenting an honest administration, Sataloğlu said that the IBB currently has a municipality understanding that takes justice as the basis.

The budget of the country's biggest municipality has also made news for positive developments in addition to the claims of excessive spending. For instance, the budget delegated for measures against a possible earthquake has increased from TL 147.7 million in 2019 to TL 341 million in 2020, which is a significant step for a province such as Istanbul, which is located at an area with major earthquake risk. However, this news seems to be overshadowed by the aforementioned scandals.

At the beginning of July, Imamoğlu also came under fire for water shortages and pollution in the commercial capital.

Particularly, residents of the Şile district have complained of frequent water cuts, while several neighborhoods went without running water for up to a week at that time. As a response to criticisms, the IBB blamed insufficient water supply in the face of the increasing population of the district, which is a popular getaway for Istanbulites due to its breezy location near the Black Sea during hot summers. The municipality also said the number of people spending their weekend in the district reached 1 million but a “water pressure” problem prevents water utility companies from supplying enough water, especially to areas on elevated ground.

For older residents of the city, however, the images of lines in front of water tankers recalled similar scenes in the 1990s when water shortages were a daily occurrence all across the city before then-Mayor Recep Tayyip Erdoğan, now the incumbent president of the Republic of Turkey, took office in 1994.

Along with water shortages, the municipality also faces criticism for pollution in several bodies of water, including in the Golden Horn, whose waters turn darker every day. The municipality said earlier that the change of hue was due to an algae bloom, a natural incident, while the Ministry of Environment is investigating causes of the pollution.

*This article is contributed by Şeyma Nazlı Gürbüz