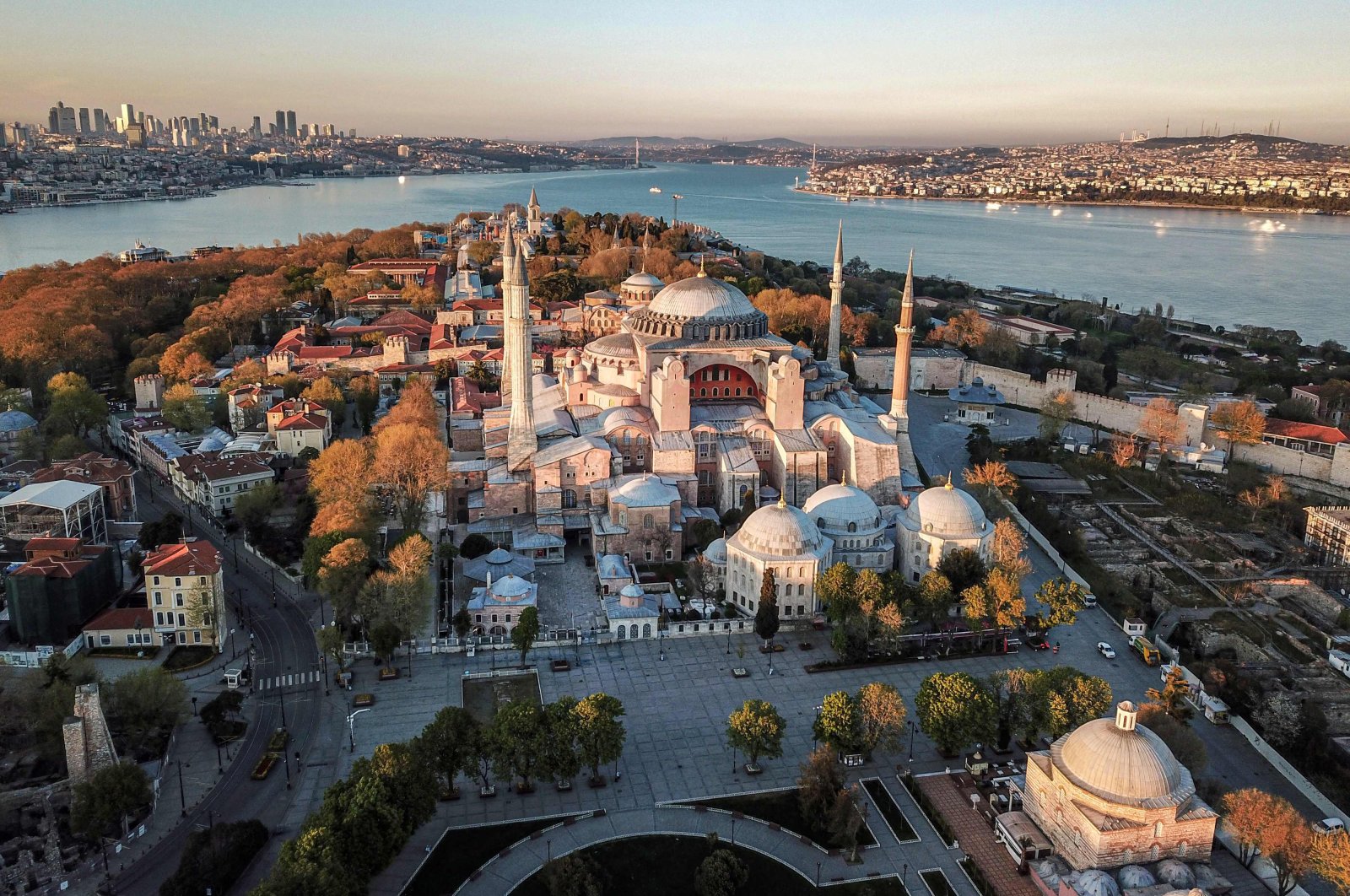 A Turkish court paved the way for Hagia Sophia, the largest church built by the Eastern Roman Empire in sixth-century Istanbul, to be reverted into a mosque as dozens of people awaited the ruling outside the building

Upon the court’s ruling, President Recep Tayyip Erdoğan signed a presidential decree to hand over Hagia Sophia to Turkey's Presidency of Religious Affairs and open for worship while congratulating the Turkish people.

The court stated that Hagia Sophia is officially registered as a mosque in its deed, adding that it was decided its use for anything other than a mosque was legally not possible. "The Cabinet decision in 1934 that ended its use as a mosque and defined it as a museum did not comply with laws," it said.

The Permanent Foundations Service to Historical Artifacts and Environment Association, an Istanbul-based nongovernmental organization, had filed a petition at the 10th Chamber of the Council of State seeking annulment of the decision to convert Hagia Sophia into a museum after being a mosque for nearly 500 years. The court heard the parties' arguments at a July 2 hearing before issuing its ruling.

The petition said Hagia Sophia was the private property of Ottoman Sultan Mehmed II, who in 1453 captured Istanbul and turned the religious structure into a mosque.

Hagia Sophia, one of the world’s most important historical and cultural heritage sites, was built in the sixth century during the reign of the Byzantine Empire and served as the seat of the Greek Orthodox Church. It was converted into an imperial mosque with the Ottoman conquest of Istanbul in 1453. The structure was converted into a museum during the strictly secular single-party rule in 1935, but there have been discussions about reverting it to a mosque, with public demand to restore it as a place of worship gaining traction on social media.

“The issue of Hagia Sophia’s statute is an internal affair of Turkey and its right of sovereignty,” Cengiz Tomar, rector of Ahmet Yesevi University told Daily Sabah. “It was turned into a museum through a Cabinet decree and can once again turn into a mosque with a decree. However, since there will be both internal and external reactions, in response the government would have wanted to support the legality of the decision with a high court legal opinion.”

While some groups have long been pressing for the structure, which they regard as a Muslim Ottoman legacy, to be reverted into a mosque, others believe the UNESCO World Heritage site should remain a museum as a symbol of Christian and Muslim solidarity. The United States, Russia and Greece, along with UNESCO, had expressed concerns ahead of the ruling.

There has been criticism over the move in some circles, with the U.S. Secretary of State Mike Pompeo issuing a statement last week urging the Turkish government of keeping its status as a museum.

The Turkish president noted that there are 435 churches and synagogues in Turkey where Christian and Jews can pray.

“Whether positive or negative, this decision is the right of the government and has significant support from the people. The issue of Hagia Sophia has left deep traces in the minds of the Turkish people just as the execution of (former Prime Minister Adnan) Menderes and this trauma has to be resolved,” Tomar added.

Reopening Istanbul's Hagia Sophia for prayers will not deprive it of its identity, as it will always belong to the world's historical heritage, Ibrahim Kalın, Turkey's presidential spokesperson, told Anadolu Agency (AA) on Thursday.

Opening Hagia Sophia to prayer, as Turkish leaders have expressed interest in doing, will not hinder people visiting it, he said, adding that “Turkey will still preserve the Christian icons there, just like our ancestors preserved all Christian values.”

"Opening up Hagia Sophia to worship doesn't keep local or foreign tourists from visiting the site," Kalın stressed, "So a loss from the world's heritage is not in question.”

In 2015, a cleric recited the Quran inside the building for the first time in 85 years. The following year, Turkey's religious authority began hosting and broadcasting religious readings during the holy month of Ramadan and the call to prayer was recited inside on the anniversary of the first revelation of the Quran to the Prophet Muhammad.

Another source of criticism has been Greece, upon which Turkey stated that Athens, the only remaining European country without a mosque in its capital, being disturbed by the recital of the Holy Quran in Hagia Sophia is a case in point illustrating the intolerant psychology of this country.

UNESCO, on the other side, on Thursday stated that it must be notified of any change in the status of Hagia Sophia and the changes may have to be reviewed by its World Heritage Committee. UNESCO told Reuters that the Hagia Sophia was on its list of World Heritage Sites as a museum and as such had certain commitments and legal obligations.