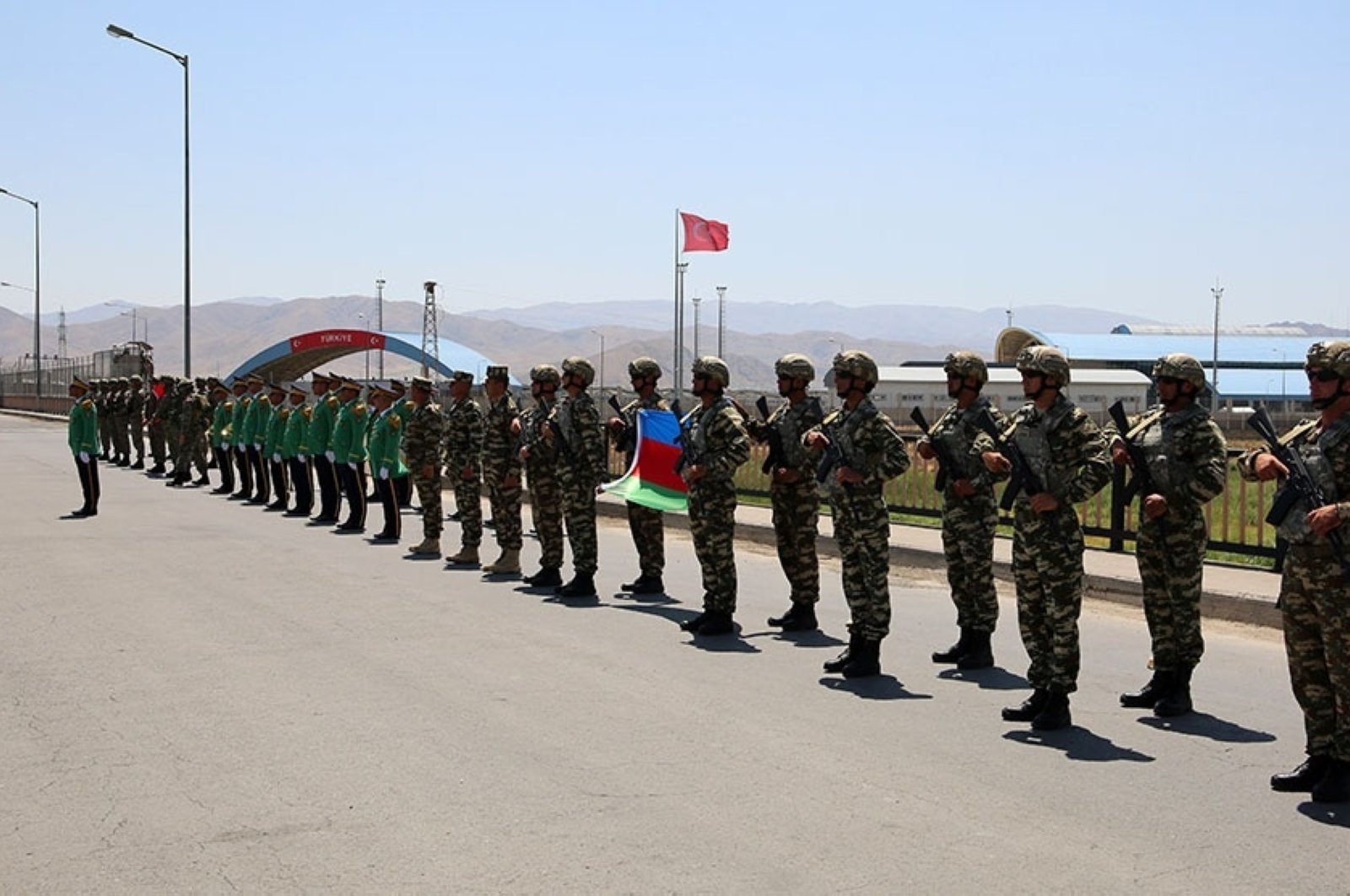 Turkish soldiers arriving for the large-scale joint military exercises with Azerbaijan are welcomed in a ceremony in Nakhchivan, in the Nakhchivan Autonomous Republic of Azerbaijan, July 27, 2020. (AA Photo)
by DAILY SABAH
Jul 29, 2020 12:42 pm

Ankara and Baku on Wednesday will launch large-scale military exercises as part of the Agreement on Military Cooperation between both countries after the Azerbaijani defense ministry announced that a group of servicemen and the aircraft of the Turkish Armed forces (TSK) arrived in Nakhchivan the previous day.

During the solemn welcoming ceremony for the servicemen participating in the exercises, which took place at the military airfield of the Combined Arms Army, the national anthems of both countries were performed.

“Military, attack and combat helicopters of the Turkish Armed Forces arrived on a military transport aircraft, are brought to a state of readiness for Live-Fire Flight-Tactical Exercises at the military airfield of the Combined Arms Army,” the ministry’s statement said.

Turkey and Azerbaijan have been reiterating cooperation in every field, especially the military, after an Armenian attack took place on Azerbaijan’s border on July 12.

Several high-level announcements came from Turkey following the attack, as Ankara reiterated that it stands with Baku in these difficult times and warned Armenia to respect Azerbaijan's territorial integrity. Ankara voiced concern over the tension that has been ongoing since the invasion of Nagorno-Karabakh, which turned into a conflict with Armenia's "reckless and systematic attacks."

Most recently, Presidential Spokesperson Ibrahim Kalın reiterated Turkey's determination to support Azerbaijan in the face of Armenian aggression near the border, but he noted that this does not mean Ankara has closed its doors on diplomatic communication channels.

On the security of Azerbaijan and the region, Akar said Turkey and the TSK will continue to do what they have to do, adding, "No one should doubt that."

The two ex-Soviet republics have been locked for decades in a conflict over Armenia’s illegal occupation of Azerbaijan's Nagorno-Karabakh region.

The recent skirmishes appear to be the most serious spike in hostilities since 2016, when scores were killed in four days of fighting.

Turkey has frequently stressed that the dispute needs to be resolved within the framework of international law and Azerbaijan's sovereignty and territorial integrity.

Three United Nations Security Council resolutions and U.N. General Assembly resolutions refer to Nagorno-Karabakh as being part of Azerbaijan. The Parliamentary Assembly of the Council of Europe refers to the region as being occupied by Armenian forces.