July 15 coup attempt: From a dark night to a bright day 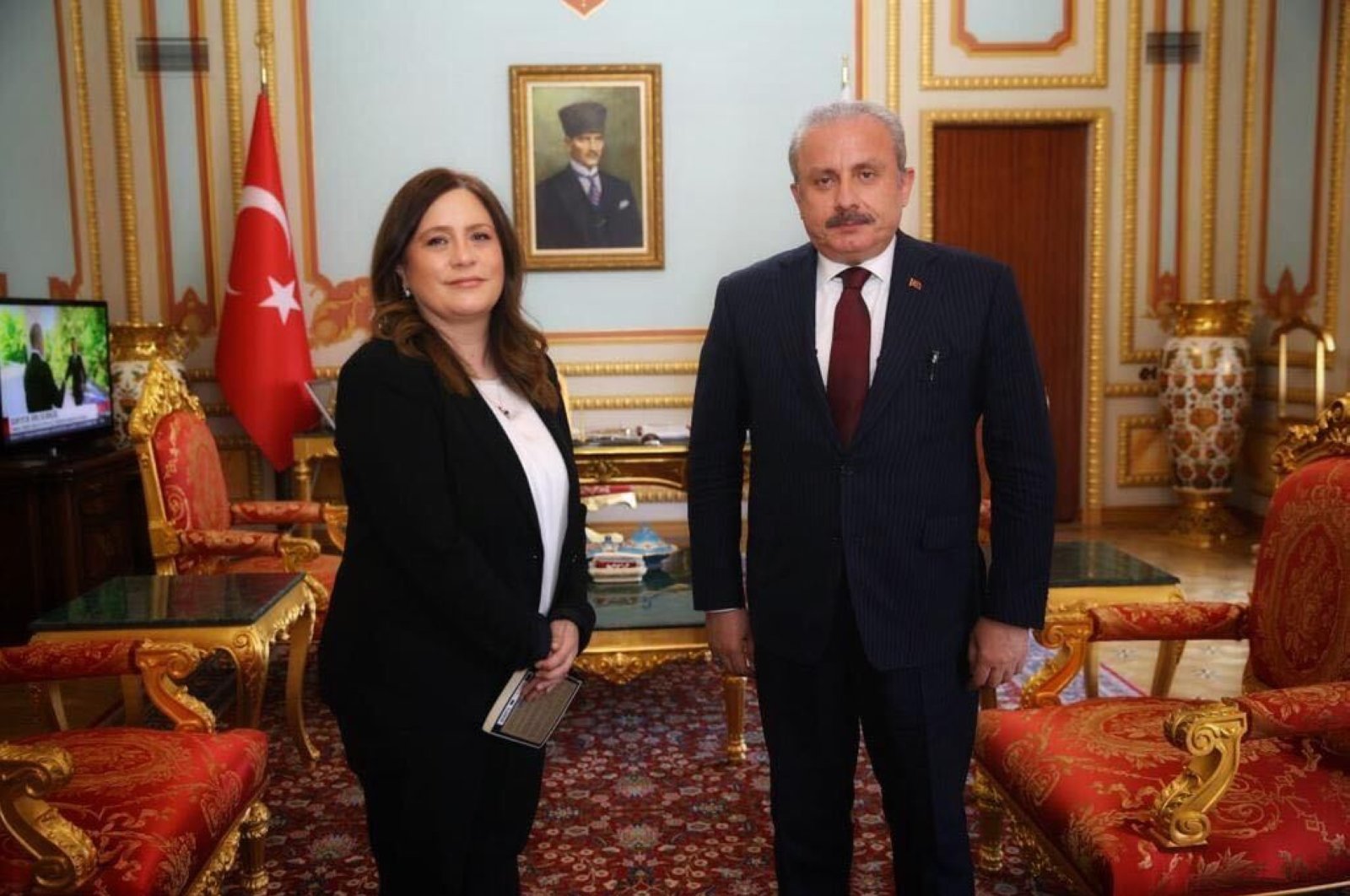 On one of the most critical days in Turkey’s history, its citizens paid the price of their commitment to democracy and the rule of law with their lives, Mustafa Şentop said, praising the Turks who stood firmly against the “terrorist coup attempt”

On the night of July 15, 2016, the Turkish people lived through an ordeal that was unprecedented in Turkish history, Turkish Parliament Speaker Mustafa Şentop said, describing the events of the coup attempt by the Gülenist Terror Group (FETÖ).

“Fighter jets bombed the Palace of the Presidency, the Grand National Assembly of Turkey and the police headquarters. The Bosporus Bridge was closed by tanks. Tanks rolled on the streets, running over people. Unarmed citizens protesting the coup attempt were shot and killed. Attack helicopters fired at civilians protesting this heinous coup attempt. Even an elite squad was sent to assassinate the elected president, Recep Tayyip Erdoğan. The terrorist plotters also raided major media outlets, be they private or state, either to force them to announce the messages of the coup plotters or to silence them,” Şentop told Daily Sabah in an exclusive interview.

Yet Turkey managed to stave off the coup attempt that left hundreds dead and nearly 2,200 wounded.

“The Turkish nation has thwarted the most violent act of terror and treason against its democratic institutions on the night of July 15/16 and turned the darkness of night to the light of day,” Şentop underlined, adding that people of all backgrounds, as well as the Turkish media, played a key role in foiling the attempt.

Saying that FETÖ is a unique and hypocritical terrorist organization, the Parliament head explained that the uniqueness of the organization comes from their use of legal means and institutions as covers to achieve illegal objectives.

“Unlike other ordinary terrorist groups, they did not seek to acquire guns or power illegally, because as civil servants and military and police officers, they had access to weapons through legal means. In other words, since its establishment, FETÖ's main agenda has been to infiltrate critical state institutions,” Şentop pointed out, underlining that Islamic history has never before witnessed such a cruel terrorist act and organization.

FETÖ members are permitted by their leader to violate religious codes in order to blend in with the mainstream majority in organizations they are asked to infiltrate, Şentop said. Members hide their identities and pose as leftist, rightist, liberal, secular, religious or pious according to prevailing circumstances.

Şentop quoted Fetullah Gülen's lecture to his followers to infiltrate the country’s main organizations, “You must move in the arteries of the system without anyone noticing your existence until you reach all the power centers ... until the conditions are ripe ... until we can shoulder the entire world and carry it ... You must wait until such time as you have gotten all the state power, until you have brought to your side all the power of the constitutional institutions in Turkey.”

Investigations following the coup attempt sought to disclose the secretive communication methods used by the terrorist group's military infiltrators to contact their handlers in FETÖ, such as payphones and ByLock, a heavily encrypted messaging app.

“At the end of the day, they created a new belief system that serves their terrorist aims, which is in total contradiction with Islam,” Şentop said, “Turkey, unfortunately, witnessed several coup attempts throughout its history, beginning in the late Ottoman years. Yet, this coup attempt was not a conventional one that Turkey or any other country has previously witnessed.”

The head of Parliament described the attempt as a “terrorist coup attempt” and continued to say that the date of July 15, 2016, became a turning point when the nation said "stop" to the coup attempt and to all attempts the nation witnessed in 1960, 1971, 1980 and 1997.

“An armed coup attempt has been thwarted by the nation for the first time in the history of our country. Turkish citizens have proved their commitment to democracy and rule of law at the cost of their lives,” Şentop underlined, saying that Turkey will never forget the steadfast stand of the people, the police and soldiers who firmly stood against the minority group that attempted the coup within the Turkish Armed Forces. “The nation defended their state," he said.

Convening at 1:39 a.m. that night, the Grand National Assembly of Turkey (TBMM) fulfilled its duty under attack from bombs and bullets and demonstrated, once again, that it is a parliament worthy of the nation, Şentop said, depicting the resistance of all political party groups in the assembly to the coup attempt as a “united position and with one voice.”

Recalling that Parliament immediately issued a joint declaration during the extraordinary meeting of the TBMM on July 16, Şentop said: “This joint declaration is the most tangible proof that nothing will ever be the same in Turkey. This united position of the Grand National Assembly of Turkey and its single voice further strengthened our nation and national will.”

While FETÖ terrorists had tanks, fighter jets and helicopters at their disposal, Turkish citizens had nothing other than flags, Şentop underlined.

He said that it is a big shame that some politicians and parliamentarians defended members of FETÖ rather than the democratic masses who placed their bodies in front of tanks to protect democracy. “On that night, civilians did not fire even one single bullet,” Şentop stressed.

“Today, we are still expecting our friends, strategic partners and NATO allies to hand over the terrorist leader Fetullah Gülen to us. This is our most basic right,” the Parliament speaker said.

Gülen has been in self-imposed exile in the U.S. state of Pennsylvania since 1999. Turkey has issued multiple extradition requests to the U.S. for Gülen, but despite close relations between the two countries, they have fallen on deaf ears. Turkey has sent several folders full of evidence implicating Gülen in a number of criminal cases in Turkey, but Washington has failed to take steps toward extradition. The first request was sent four days after the 2016 coup attempt and, although the U.S. condemned the illegal operation, it was reluctant to deport FETÖ members to Turkey.

“Today’s Turkey is far stronger than the Turkey of the evening of July 15,” Şentop said. “We clearly observed that the most effective and strongest antidote to the coup was the national will. Future generations will never forget the heroes of the anti-coup resistance. This heroic nation thwarted the armed coup attempt with its foresight and courage.”

Şentop compared the nation’s glory to winning the war of independence again and gave the example of one of the heroes of July 15.

Metin Doğan, a math teacher, on the night of the coup faced down soldiers at Istanbul's Atatürk Airport, going as far as to stand in front of the tanks to prevent them from moving.

“We all remember his historic stand. Hurling himself on the soldiers, he asked them, I quote, ‘I am a Turkish Soldier. Whose soldier you are?’ We should always keep on thinking of this crucial question,” Şentop said.

Üzeyir Civan, one of the millions of Turkish citizens who poured onto the streets on that night, says “he was proud to defend his country even at the loss of an arm.” Cengiz and Hüseyin Hasbal, two brothers, were at the forefront of a group of democracy supporters headed to the Bosporus Bridge. Cengiz was shot by the second volley of bullets. The bullets missed Hüseyin, but Cengiz died 19 days later. Dürdane Hasbal, the mother of this hero, says, “I’m not the only mother of a martyr, but I am proud to be one.”

“Every member of our nation, from every age and walk of life, banded together against the coup plotters,” Şentop said.