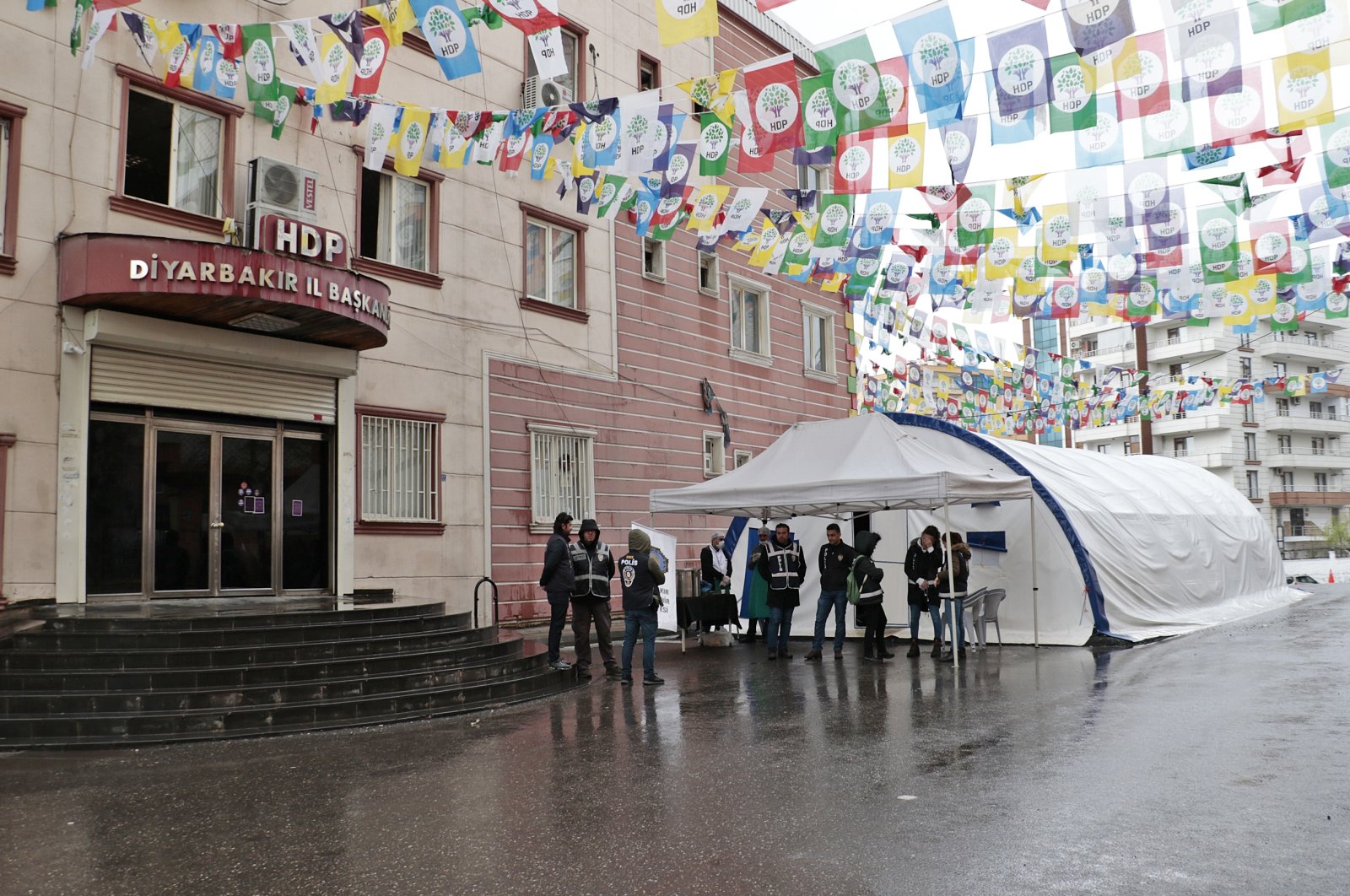 Kurdish families have been waiting in front of the HDP Diyarbakır building for 205 days to get back their children abducted by the PKK, March 25, 2020. (DHA Photo)
by Daily Sabah with AA Mar 25, 2020 12:23 pm
Edited By Dilara Aslan
RECOMMENDED

A large number of Kurdish mothers have gathered as part of a sit-in protest in front of the pro-PKK Peoples’ Democratic Party (HDP) building in Diyarbakır for the last 205 days. One of many parents fighting for the return of their children from the hands of the terrorist group, Fevziye Çetinkaya said her son, Süleyman Çetinkaya, had visited the party’s building before being abducted. On Tuesday, her statements were added to those by other witnesses in an investigation file being compiled.

Diyarbakır province's Eğil District Mayor Mustafa Akkul was detained as part of an anti-terror probe early Monday under suspicion of the crimes of “being a member of an armed terrorist organization” and “making terrorism propaganda.” According to an anonymous witness, it had been rumored that Süleyman used to come to the municipality occasionally with a laptop and have conversations with Akkul that sometimes lasted about an hour.

The witness, who claimed that the PKK wanted Akkul to bring more members to the organization, said: “I know that Akkul’s family is close with the PKK. I think that (Süleyman) Çetinkaya was brought to the PKK through Akkul. Çetinkaya disappeared one day after he visited Akkul.”

It was also mentioned in the investigation file that Akkul had made terrorism propaganda and held a moment of silence in the municipality for eliminated terrorists.

Furthermore, in video footage included in the case file, it could be seen that Süleyman Çetinkaya had entered the Eğil Municipality and walked toward the office of Akkul. The electronic passport control system also showed that he had visited Iraq three times between 2015 and 2019.

Its mayors have also been accused of undermining municipal services, allowing the PKK to dig ditches in the streets and launch attacks on police and soldiers when the terrorist group adopted an urban warfare strategy in July 2015 and ended a two-year reconciliation period. HDP municipalities and their staff were also found to be actively participating in terrorist attacks launched since July 2015.

Kamile Küçükdağ, one of the mothers who joined the protests from the southern Adana province, said that she will not leave until she is reunited with her son Engin, who was kidnapped five years ago when he was only 15.

"We've been here for 205 days. I won't leave here until my son comes back even if it takes a thousand years," she said.

Salih Sadak, a father protesting for the return of his son, Mikail, said that he hadn't heard from the young man for 15 years.

"I want my son from the HDP. I won't leave until they bring my son back. The HDP deceived my son," he said.