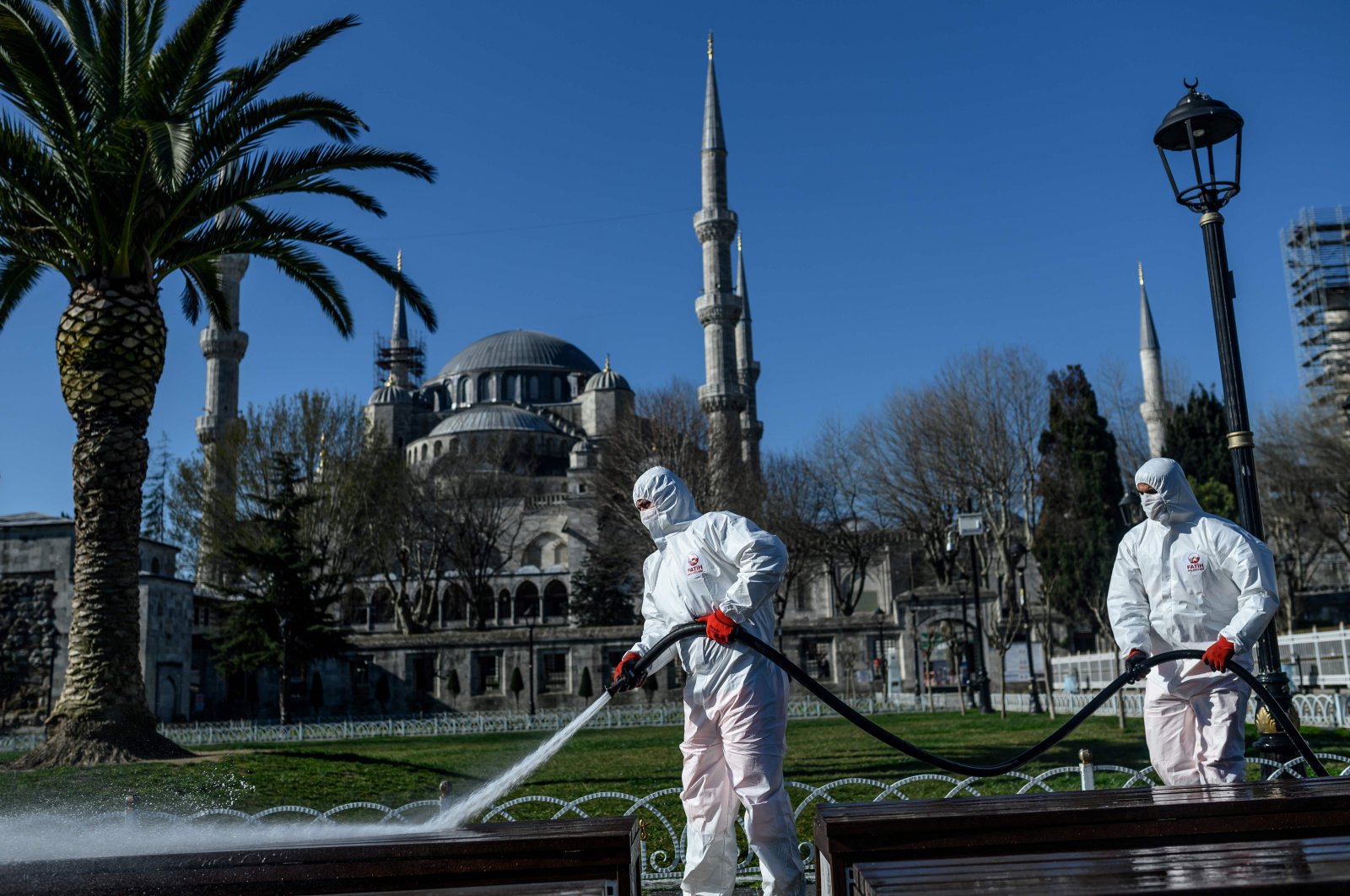 Members of the Fatih Municipality disinfect Istanbul's Sultanahmet square with the Blue Mosque seen in the background to prevent the spread of the new coronavirus on March 21, 2020. (AFP Photo)
by DAILY SABAH Mar 22, 2020 12:30 pm
RECOMMENDED

The ruling Justice and Development Party (AK Party) in recent days instructed its local administrations to tighten controls for preventing the spread of COVID-19 disease and to take measures for easing the lives of citizens during self-isolation and the economic downturn.

The instructions underlined by the party’s central committee include the frequent sterilization of public spaces, public transportation vehicles and public buildings. In order to prevent elderly people from going outside of their houses, municipalities have been instructed to meet their health and shopping needs. For those who cannot afford basic needs and hygiene products, local administrations have started to hand out food, cologne, soap and detergent.

During the fight against COVID-19, health personnel will also be able to use public transportation vehicles and public parking lots for free. For health personnel who cannot take care of their families or relatives due to the long work hours, municipal officials will meet their needs if needed.

Local administrations also constantly warn that citizens must stay at home and not go out unless necessary.

Political parties in Turkey had issued circulars to party members and municipalities as part of precautionary measures against the coronavirus outbreak which has caught the world off guard.

The AK Party told party members that they need to act responsibly and offer guidance to society amid the coronavirus. The circular urged municipalities to cancel all events involving close contact among people, including meetings, celebrations and similar events, while urging them to fully abide by the health ministry guide on quarantine conditions.

The circular also urged AK Party municipalities to disinfect markets, public squares, train and metro stations, bus stops, public transportation and other public places on a regular basis, while it suggested that municipalities should increase inspections to ensure that prices are not unreasonably raised amid the outbreak.

The AK Party also called on municipal authorities to only follow the Health Ministry’s advice and help spread it among citizens to raise awareness about the precautions through relevant channels and refrain from making statements that would cause a public outcry.

Like everyone else, Turkish politicians are adopting precautionary measures to prevent the spread of the virus.

The Turkish Parliament has taken extensive measures to prevent the spread of the coronavirus. Political parties have canceled scheduled parliamentary group meetings. The General Assembly, in the meantime, will continue working with a skeleton staff as part of an agreement reached with various parties.

Last week, the Grand National Assembly of Turkey said no visitors would be allowed in the Parliament until March 31.

COVID-19 could be contained in Turkey, where there are nearly 950 cases and 21 deaths. The virus, which emerged in Wuhan, China, last December, has spread to at least 171 countries and regions around the globe, while the tally of confirmed cases has topped 307,000, according to data compiled by U.S.-based Johns Hopkins University. The global death toll has exceeded 13,000, causing a chain reaction as governments place countries under lockdown to stem the spread.