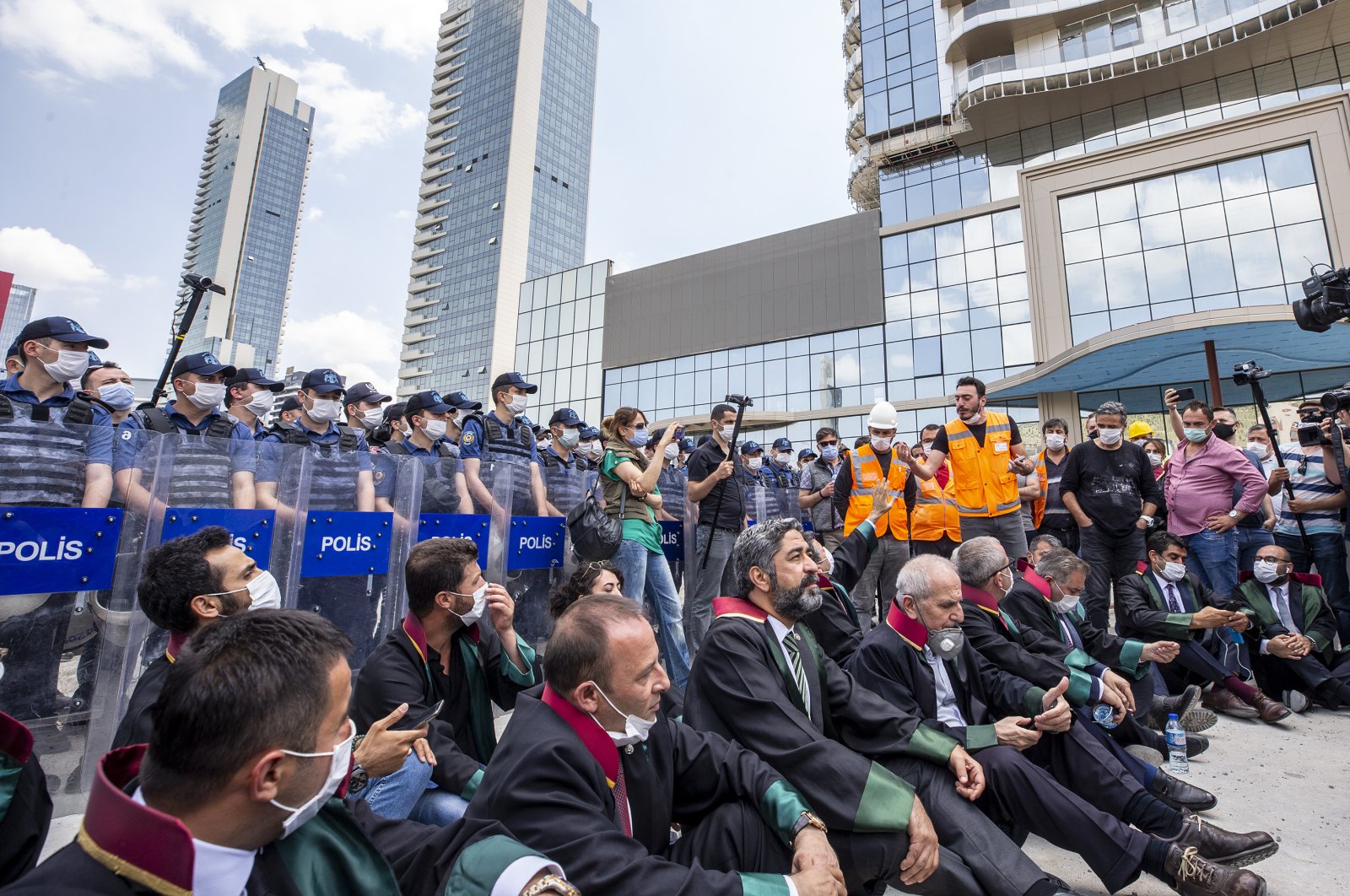 The heads of bar associations across Turkey have presented a united stance against the new proposal on a multiple bar association system, but the government says protests are premature as the content of the proposal has yet to be formalized

On Friday, several bar associations called for a march toward the capital province to protest the government's work to establish a proposal on the multiple bar association system. The call for protest was answered by 29 associations, all of which launched a symbolic on-foot journey of about 20 kilometers (12.4 miles) a day from their respective provinces. The long march ended Monday at the entrance to Ankara where security forces prevented the lawyers, marching under the slogan "Defense Marches," from entering the capital. The march quickly turned into a sit-in protest following the intervention.

"On May 19 and June 1, we declared joint statements expressing that this proposal should be removed and alternative work on bar associations should be established with the participation of lawyers as consultants. However, we feel like our voices have not been heard ... That's why we called on all the lawyers to march to Ankara on Friday. However, when we reached Ankara, we could not move any further due to police intervention," said the head of the Muğla Bar Association, Cumhur Uzun.

Speaking to Daily Sabah while sitting at the protest, Uzun said that although there might be some differences between the bar associations in terms of their approach to the issue, they are united against the proposal.

"Some of our friends could not participate in the movement due to various reasons. With some of them, we have some procedural differences in terms of how to express ourselves. Still, we are all united in this subject," he said.

There are a total of 80 bar associations in Turkey, one association for each province – except Bayburt and Gümüşhane provinces where the associations were united due to the low number of lawyers.

AK Party: The march is pointles

The Justice and Development Party (AK Party) government is getting ready to legalize the multiple bar association system before the bar associations' elections in October. According to this new proposal, the bar associations will still be administrated from one united center, which is the Union of Turkish Bar Associations (TBB). However, there will no longer be one bar association for each province. In the provinces with bar associations that have more than 5,000 members, an additional association will be able to be formed if 2,000 members come together and decide to do so. This proposal mainly affects metropoles such as Istanbul, Izmir and Ankara, due to their large number of lawyers. For instance, in Istanbul, there could be five different bar associations at the same time if the proposal becomes law.

According to the AK Party, there is no point in adopting such a strong stance against a proposal of which even the contents are not yet clear. The first response from the ruling party to the bar associations' march came from AK Party Group Deputy Chairman Bülent Turan, who is also participating in the preparations of the proposal.

"Why would bar heads march against a legislative proposal whose contents they do not even have any information about?" Turan asked, noting that talks have previously been held with 31 bar heads over the proposal.

Turan further expressed that they, as the government, fail to understand the motivations of a group that is against the equalization of the bar associations.

In the current system, since there is no proportional representation, the associations with more members have more voice in the TBB and are also able to form administrative branches with people they choose, rather than having a variety of lawyers that can represent all segments of the society.

Uzun said he recognizes that there are some problems in larger bar associations in terms of representation, but in general, the election system of the bars is quite "democratic."

"There are some questions on representation in larger bar associations. There is the idea of proportional representation as a response to these questions. However, we believe that such a system would also lead to injustice since the ones with more votes can be excluded from the administrative branches of the associations in the end. Thus, proportional representation is not enough and inappropriate for our system. When we were discussing this system, the multiple bar association system was offered," he said, adding that in his opinion, this proposal goes against the united system and may cause discrepancies in the future.

While 29 of the bar associations marched to Ankara, several others went to Ankara in a separate move to hold talks with government authorities on the proposal. However, after receiving the information that their associates failed to enter the capital, this second group of bar heads joined the other protesters in an attempt to form a common ground between the security forces and protesting lawyers. In the end, there were about 60 bar association heads on the scene.

Pınar was alongside his colleagues, however, while answering Daily Sabah's questions, as one of the bar heads who was looking for common ground between the security forces and the protesters.

"We also talked about other types of actions, such as visiting Anıtkabir [the mausoleum of the Turkish Republic's founder]. Thus, I came to Ankara today and went to visit Anıtkabir with my colleagues, while waiting for others who were marching to join us. However, at that point, we learned that they had failed to enter the city, so we came here (to the protest area)," Pınar said.

Although it seems like Edirne will not be affected by this proposal's results due to the province's comparatively small number of lawyers, "we are still against this proposal," Pınar said.

“Eighty bar associations do not march. However, whether 80 associations march or one, a democratic right is being exercised. According to our Constitution, demonstrations without violence, attacks or arms can be held without the need for permission,” TBB head Metin Feyzioğlu said in an interview with the broadcaster CNN Türk on the issue.

Feyzioğlu himself did not participate in the march. However, he was among the second group of bar heads who showed up at the scene of the protest in solidarity with their colleagues.

“Today, we all have problems with the judiciary and want a more reliable judiciary. We want the judge, the prosecutor, the lawyer in the bench to be more equipped, we want justice to appear faster, we want to say right to what is right and false to what is false, we want control mechanisms," Feyzioğlu said, adding that many steps have been taken to reform the legal system, but the systems cannot be changed overnight. Progress needs to be made steadily to achieve an overall change.

Feyzioğlu also underlined that constructive criticism and problem-solving attitudes are vital to the process, rather than just critical attitudes.