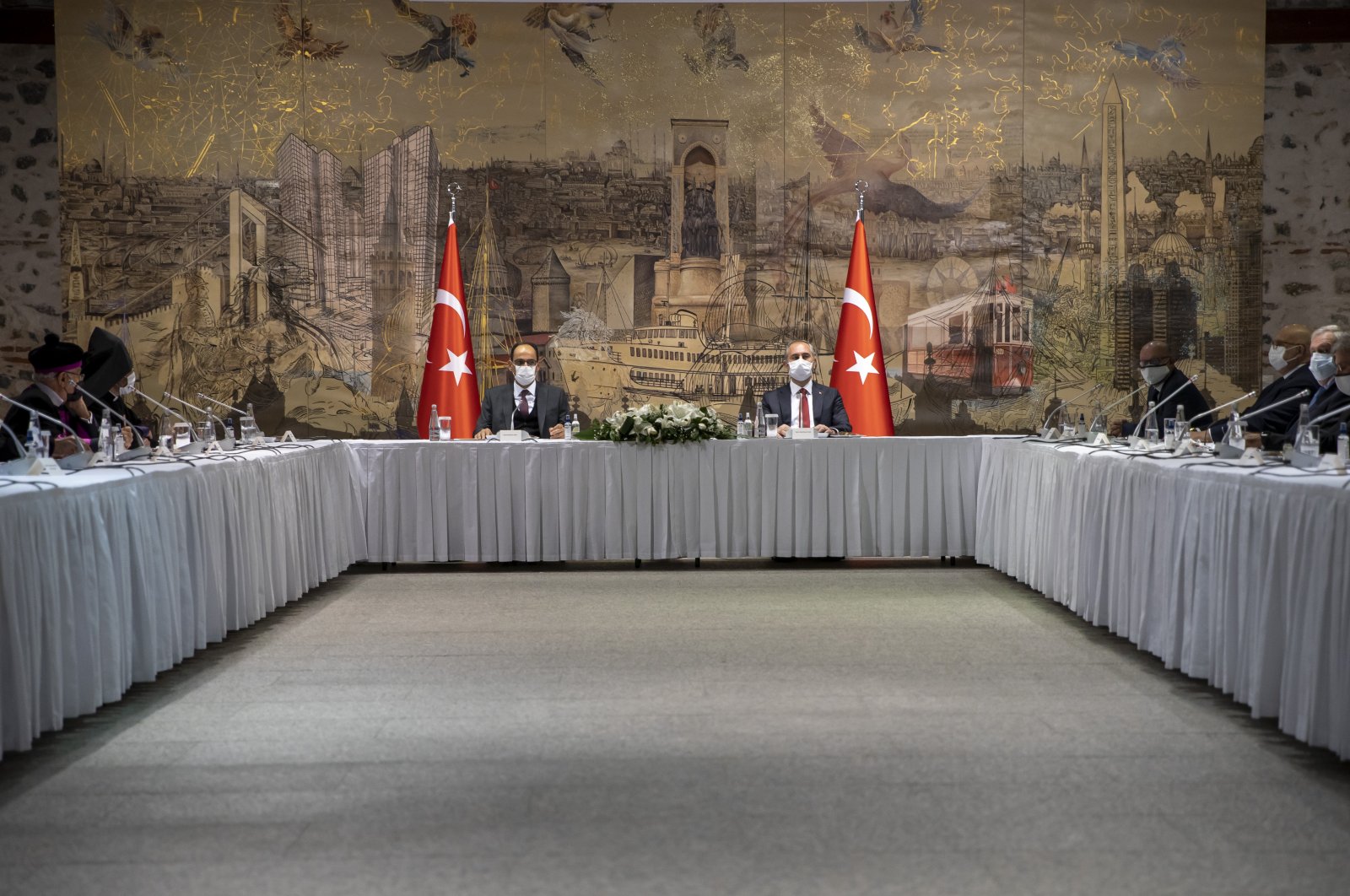 Justice Minister Abdulhamit Gül and Presidential Spokesperson Ibrahim Kalın chair a meeting with the representatives of minority communities in Turkey at the Dolmabahçe Presidential Office in Istanbul, Nov. 29, 2020. (AA Photo)
by DAILY SABAH WITH AA
Nov 30, 2020 11:52 am

Senior Turkish officials discussed minority rights and steps that can be taken against hate crimes in a meeting Sunday with the spiritual leaders of minority communities and representatives from minority foundations.

Fener Greek Orthodox Patriarch Bartholomew; Archbishop Sahak Maşalyan, the 85th Armenian patriarch of Turkey; Yusuf Çetin, the metropolitan bishop of the Istanbul-Syriac Church, and Ishak Haleva, chief rabbi of the Jewish community in Turkey, were present at the meeting held in the Dolmabahçe presidential working office in Istanbul.

Gül said they had an important and efficient consultation with the representatives, adding that decisive steps have been taken over the last 18 years under the leadership of President Recep Tayyip Erdoğan and the ruling Justice and Development Party (AK Party).

"Since 2008, we have seen once again that the steps we took regulating foundations yielded very important results in removing obstacles from minorities," Gül said.

He went on to say that suggestions regarding property rights, the right to education and the right to organize were discussed.

Noting that the ruling AK Party has demonstrated its desire to increase freedom for all citizens, Gül said they also addressed further steps that can be taken against hate crimes.

He said minority community members who were unable to address the state before are now accepted and have a voice.

"As you know, with the Endowments Law enacted in 2008, a historical, revolutionary change took place and the properties and immovables that belonged to the foundations were returned."

He added that some specific issues related to churches, schools and properties that were on the minority representatives' agenda were also discussed at the meeting.

"It is extremely important that we fight against hate crimes and discrimination with a single voice, especially at a time when anti-Islamism, anti-Semitism and anti-Christianity are on the rise all over the world," he said. "We have stated here once again that there is no legal or humanitarian basis to condemn, accuse or make anyone an object of hate, regardless of their religious identity, because of their religion, ethnic identity or belief."

The meeting came amid recent reform efforts in the areas of law, the economy and democracy. Representatives of minority communities relayed their problems and expectations, describing the meeting as "positive, hopeful and solution-oriented."

In a written statement released by the Armenian patriarch, Maşalyan said that one of the consensuses that representatives of minority communities reached was the displeasure with the exploitation of issues related to minority communities in Turkey by international actors as a political tool.

“It was emphasized that there is a state structure in Turkey which is willing to listen to these problems and ready to take steps for producing solutions,” he said.

Sait Susin, the chairperson of the executive board for the Virgin Mary Assyrian Church Foundation located in Istanbul's Beyoğlu district, also said that it is very important and thoughtful that authorities noted their opinions and expectations for the planned democratic reform efforts.

In the past decades, Turkey has moved to reinstate the rights of minorities and help their survival as their numbers have dwindled over time. Long treated as second-class citizens, the Greek, Jewish, Armenian and Syrian communities have praised the return of their rights, though they have complained about it being a slow process.