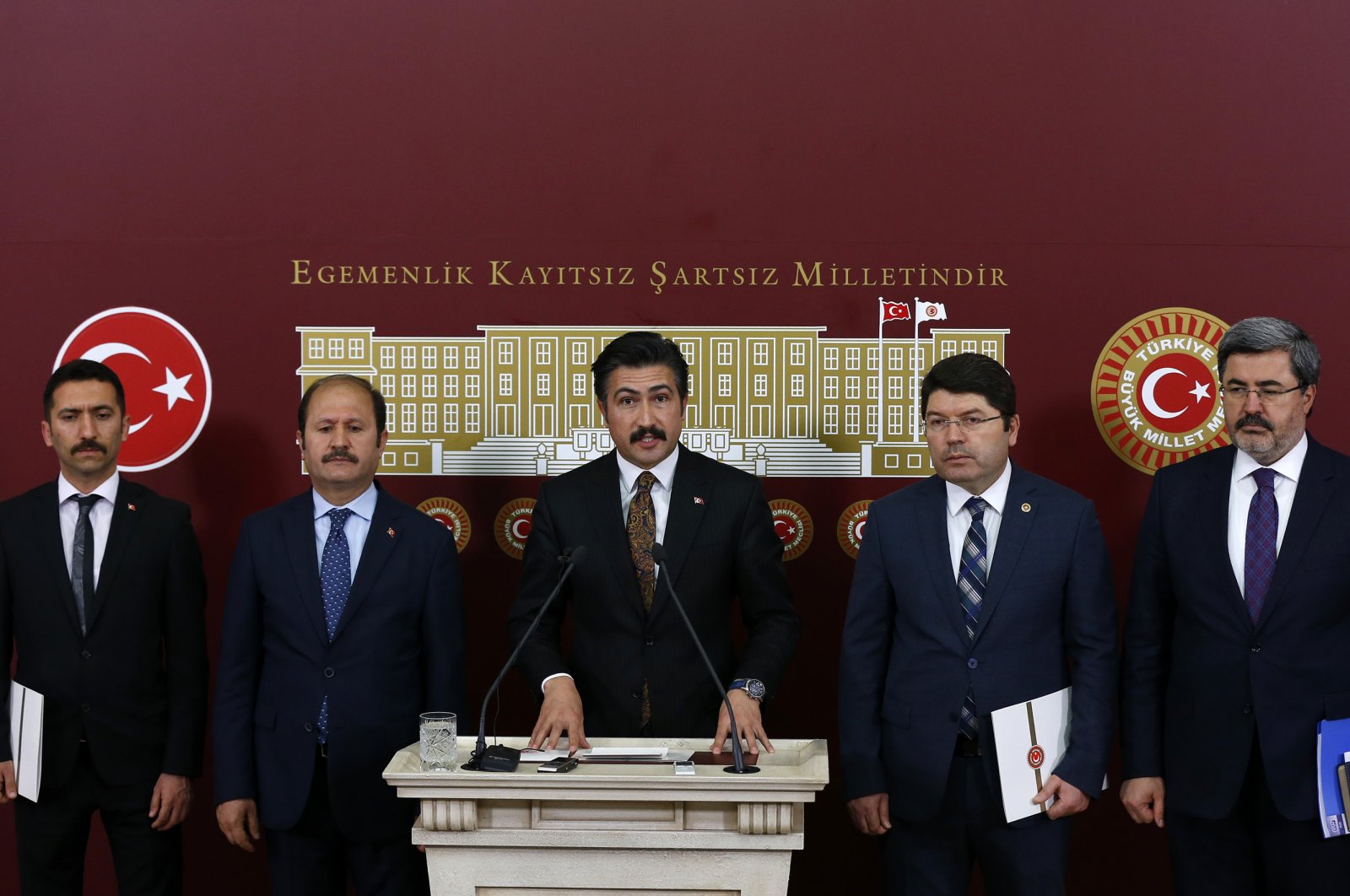 Deputy head of the AK Party's parliamentary group Cahit Özkan (C) reveals the details of the new policy on criminals alongside with deputies from both AK Party and MHP in the parliament, Ankara, Tuesday, March 31, 2020. (AA)
by DAILY SABAH Mar 31, 2020 2:44 pm

Turkey implemented a new regulation for criminals, which issued remissions and house arrests for about 90,000 prisoners while establishing further measures to tackle the coronavirus outbreak

Turkey on Tuesday approved a new policy issuing remissions for thousands of prisoners, while excluding certain felonies such as homicide and sex offenses.

Revealing the details of the policy following its presentation to Parliament, Justice and Development Party (AK Party)’s parliamentary group deputy head, Cahit Özkan, said about 90,000 prisoners will benefit from the new regulation.

According to Özkan, half of these prisoners will be transferred to house arrest as part of the new regulation.

“The ones (prisoners) aged 65 or above and ones those with children younger than 6 will be able to move to house arrest,” Özkan said.

Crimes related to terrorism, sexual offenses, drugs, homicide and violence against women have been excluded from the scope of the regulation, Özkan said, adding that for other crimes, a permanent remission by half has been issued.

According to the new regulation based on remission, the crimes related to terrorism and sexual offenses will be out of the scope. However, regarding terrorism-related crimes, there is a possibility of evaluating terrorist leaders separately from ordinary members. Those caught for using drugs will be able to benefit from remission, while those involved in drug-trafficking will be excluded.

Additionally, due to the coronavirus outbreak, the scope of house arrest is expected to be expanded with the new regulation while new measures will be taken within prisons. It is planned for the ones who are currently in open prisons to transfer to house arrest until May 30, with the potential of extension for two extra months if the coronavirus threat continues. Before the release of the regulation, Hürriyet daily reported on Tuesday that the prisoners that are older than 75-years-old, the ones who are pregnant or ill will also be able to benefit from receiving house arrest. The daily also reported that at first, it is expected for 30,000-40,000 prisoners to be released thanks to the regulation. Gradually, a total of 100,000-130,000 prisoners are expected to be released.

The habitual offenders, who were excluded from the regulation at first, included within the regulation's scope as the remission percentage for these crimes decreased to 67% from 75%. The new legislation will amend 10 articles of the Turkish Penal Code, allowing for those sentenced to up to 10 years in prison to be eligible for parole in five years, rather than the existing six and a half years.

As a response to a question asking, what were the red lines of AK Party while preparing the regulation, Justice Minister Abdulhamit Gül referred on Tuesday to a previous statement of President Recep Tayyip Erdoğan and expressed that no step will be taken that would harm the public's conscience.

"President had an approach to the issue that was making clear that no remediation will be made on felonies that the society cannot accept, such as homicide and sexual crimes. Our work has been done with a focus on this sensitivity," he underlined.

The preparation process of the regulation has been ongoing for quite some time now. During this process, the AK Party, which is the main party that is responsible for the preparation of the regulation alongside with the Nationalist Movement Party (MHP), paid a visit to all of the opposition parties, including the main opposition Republican People's Party (CHP), Good Party (İP) and People's Democratic Party (HDP). Noting the demands of these parties, the AK Party accelerated efforts to come up with a regulation that would meet the expectations as much as possible.

In these talks, CHP's main aim was to include the political crimes within the scope of the regulation. The party particularly focuses on the former HDP head Selahattin Demirtaş's imprisonment.

Previously, Erdoğan had criticized the CHP and the İP, which formed the Nation Alliance in the local elections for secretly including the HDP, but the parties had previously denied claims about the cooperation.

The Turkish government has long accused the HDP of close links with the PKK. The HDP is known for its support of autonomy in regions where large Kurdish populations live. Also, some of its members have been charged or accused of having links to the terrorist organization. Its former co-leader, Selahattin Demirtaş, was arrested in November 2016 over terrorist propaganda.

The CHP has refrained from officially including the HDP in its electoral alliance, amid fears of a possible backlash from its secular-nationalist voter base. Yet, the candidate lists for the upcoming elections unveiled the scope of cooperation between the CHP and HDP, which led to some harsh reactions within its own party organization.

The main opposition party also demands all drug-related crimes to be excluded from the regulation, with an exception of the ones who were involved with drugs through the influence of their friends.

"We believe that especially the crimes of drug-trafficking and sexual offenses and violence against women and children should be excluded from the scope of the regulation, our stance on this issue is clear," CHP's Mersin deputy and a member of the parliament's justice commission Alpay Antmen said on the issue last week.

The İP, on the other hand, said that they are closely following the process and underlined that crimes related to the financing of terrorism are red lines for their party.

When asked whether or not they would support a regulation that crosses these red lines, Türkkan said that he does not want to make any comments on this matter as of now.

Erdoğan himself also had an active role in the preparation process by setting the main principles and regularly inspecting the procedure.

Conducting a meeting via videoconference on the issue last week, Erdoğan said that the state can forgive crimes that were only committed against itself.

"We can't forgive the crimes that were committed against individuals," he reportedly emphasized during the meeting.

Turkey’s prison population is around 300,000 and the government strives to prevent crowding in prisons, a major risk at the time of the coronavirus outbreak. Naci Bostancı, parliamentary group chairman for AK Party, says the bill is not “an amnesty." "They will still serve their terms. The bill aims for the rehabilitation of convicts,” he told Demirören News Agency (DHA) on Wednesday. “It concerns the execution of the sentences, not their length. This is not a political matter. We have negotiated it with other parties and we are sensitive about its extent, especially in terms of crimes involving terrorism and violence,” he said, reminding members of the press that the bill was still in the draft phase and could change substantially.

“People will be punished if they commit a crime, but we have to look it from the aspect of rehabilitation and how such sentences will impact their lives in the long term,” he said.