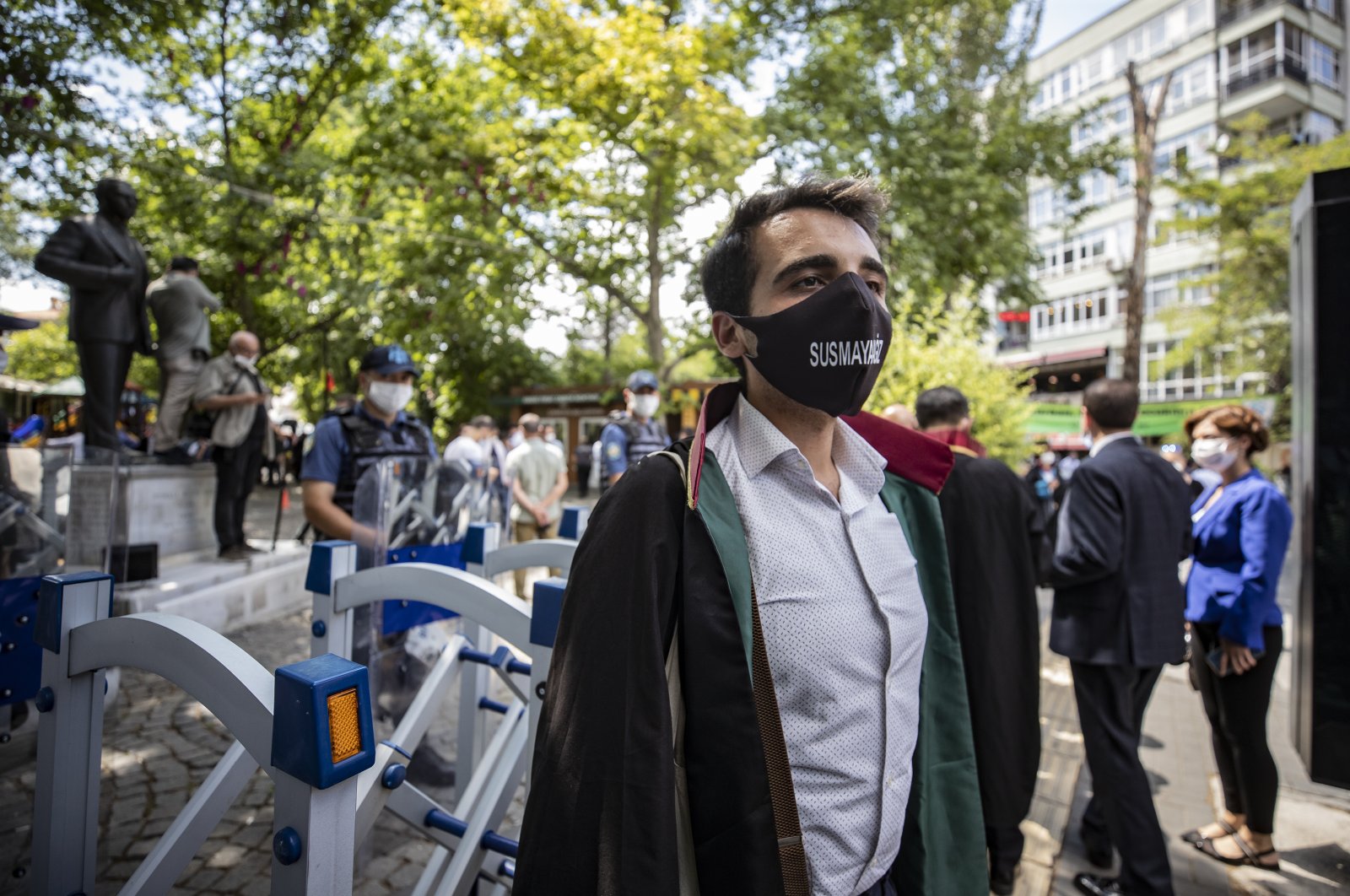 A lawyer wearing a face mask with the phrase “We will not be silenced” on it stands in protest against the controversial bar regulation in Ankara’s Kuğulu Park, Turkey, July 6, 2020. (AA Photo)
by DAILY SABAH WITH AA Jul 10, 2020 12:52 pm
RECOMMENDED

The Turkish Parliament approved the first half of the long-debated regulation on the country's bar associations on Thursday.

Consisting of 12 articles, the first half of the regulation enables lawyers and citizens to engage with the bar association they choose, if there are multiple bar associations within their respective provinces.

For instance, if there are multiple bar associations in a province, lawyers in that province will be able to apply for an internship at any bar association they want.

All the regulations regarding the lawyers, such as work assignments and dismissal from the profession, will also be conducted by the bar association that each lawyer is registered with.

However, in case of having partnerships, not all the lawyers at a law firm will have to be registered at the same bar association.

The regulation also touches upon the dress code of the lawyers, adding the internship period to the existing law as a term that will also be subject to the dress code.

Following this initial approval of the first half, the Parliament has moved on to discuss the second half of the regulation, which consists of 16 more articles.

One of the most contested articles of the bill includes splitting bar associations in large cities.

According to this new proposal, the bar associations will still be administrated from one united center, TBB. However, there will no longer be one bar association for each province. In the provinces with bar associations that have more than 5,000 members, a new association may be formed if 2,000 members come together and decide to do so. This proposal mainly affects metropoles such as Istanbul, Izmir and Ankara, due to their large number of lawyers. For instance, there could be five different bar associations in Istanbul at the same time if the bill becomes law.

The bill also indicates that the lawyers will pay half of the bar fee in the first five years of their careers.

There are a total of 80 bar associations in Turkey, one association for each province – except Bayburt and Gümüşhane provinces, where the associations were united due to the low number of lawyers.

The multiple bar association system regulation was opposed by all 80 bar associations, 29 of which marched to Ankara on June 20. In protest of the law, hundreds of lawyers came together in front of Istanbul's Çağlayan Courthouse last week. Shouting "defense resists," the lawyers said they would do whatever it takes to stop the regulation from passing in the Parliament. Another group of lawyers also protested the bill in the capital city Ankara. Since then, the protests continue in front of the Parliament as well as Ankara's Kuğulu Park with the presence of many bar heads and lawyers. On the other hand, the ruling party says the bill is not against the position of attorneys in general but instead focuses on the administrative structures of the bar associations.

In the current system, since there is no proportional representation, the associations with more members have more voice in the TBB. They are also able to form administrative branches with people they choose, rather than have a variety of lawyers representing all social segments.