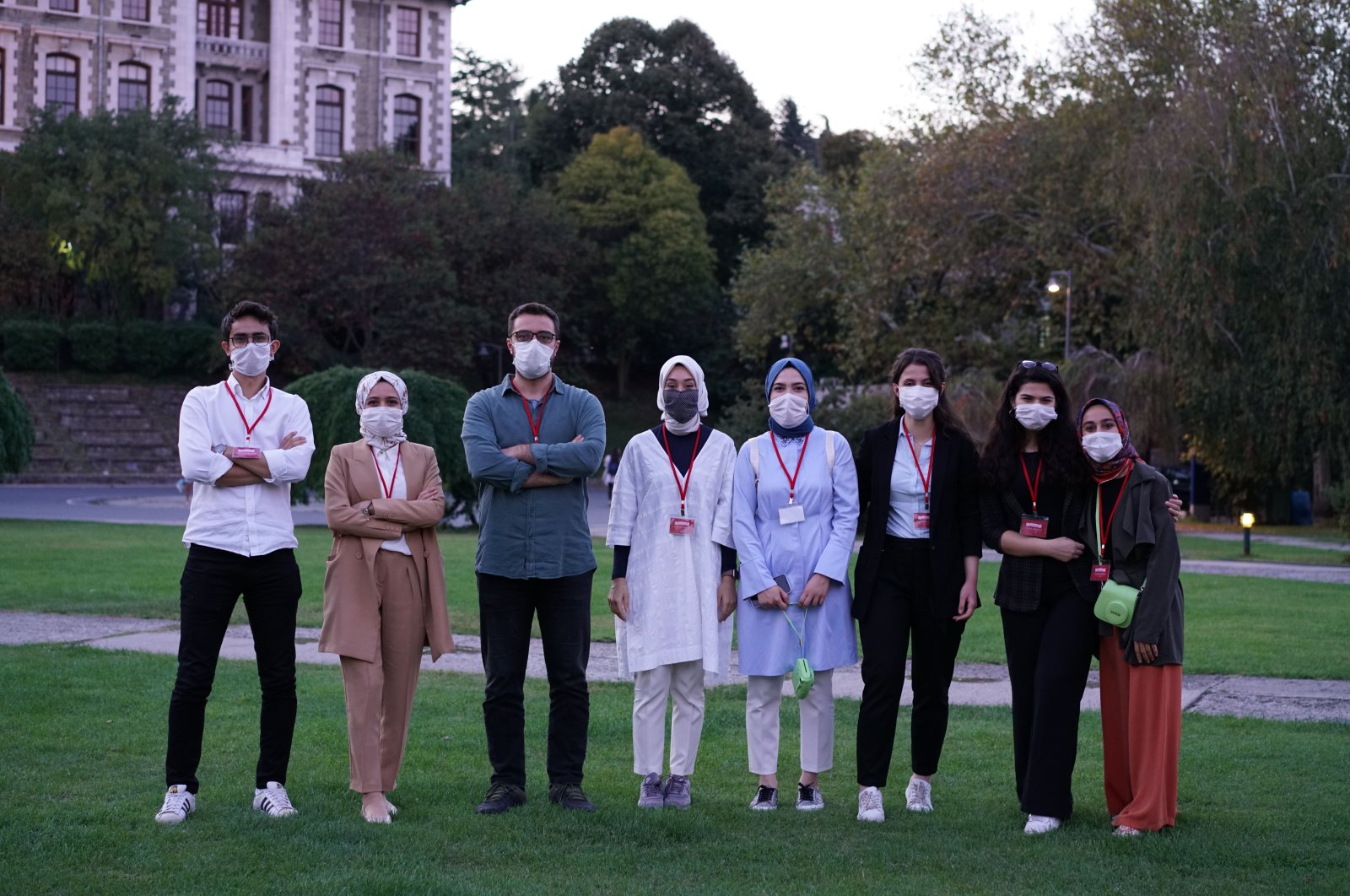 Brimming with enthusiasm and eager to find solutions to many problems faced by the youth, Turkey’s youngest lawmaker Rümeysa Kadak comes up with new projects while ensuring the involvement of young people with different ideologies, and solves problems through the fruitful process of debate and critical thinking

“There is a problem if there isn’t anyone with a different opinion in a meeting, or there would certainly be issues related to the outcome of such a meeting.” These are the words of Rümeysa Kadak, the 24-year-old Justice and Development Party (AK Party) lawmaker who has been leading a number of initiatives to address problems faced by the youth to enhance their participation in Turkish politics during her two years in office.

The lack of interest from the youth in politics, a global phenomenon, is not unique to Turkey.

While young people between the ages of 15 and 25 constitute a fifth of the world population, only 1.65% of lawmakers around the world are in their 20s, 11.87% of them are in their 30s, and the global average age of deputies stands at 53, according to the United Nations.

Young people make up 17 million of Turkey's population of 82 million, with the median age in the country standing at 31.5, but there are only a few young lawmakers in the Turkish Parliament, including 31-year-old Bartın Deputy Aysu Bankoğlu from the main opposition Republican People’s Party (CHP), 28-year-old Konya Deputy Abdulkadir Karaduman from the Felicity Party (SP), 24-year-old Diyarbakır Deputy Dersim Dağ from the pro-PKK Peoples’ Democratic Party (HDP) and 35-year-old Kayseri Deputy Ismail Özdemir from the Nationalist Movement Party (MHP), to name a few.

Embracing differences and addressing the needs and demands of the Turkish youth are some of the priorities of passionate lawmaker Kadak, considered to be the youngest lawmaker in the country. Kadak's recent initiative, the Policy Analysis Group (PAG), is one of her dynamic projects, which involves the active participation of young people in workshops created to address their problems.

Receiving around 1,000 online applications for each workshop, the PAG team carefully chooses participants who have the expertise and problem-solving skills in line with the topic of the workshop.

The two workshops held so far have been focusing on substitute teachers and enhancing student satisfaction in universities, with both groups trying to create solutions related to the issues. The workshops will go on until they feel their goal has been achieved, says Kadak.

Substitute teachers in Turkey, most of whom are young graduates unable to secure permanent jobs in public schools, had long been complaining about the disadvantages of their position including a pay gap and assignments among other things.

Just as in the rest of the world, university students complained about several issues including economic problems such as the lack of scholarships and bursaries, sheltering needs, the quality of food and extracurricular activities, as well as social and psychological problems.

“I believe progress is teamwork. Regardless of how much we individually work to improve and reach better results, we cannot succeed unless we act together and work in harmony,” Kadak told Daily Sabah, adding that her door is open to anyone and everyone who wants to be a part of the team, regardless of their political ideologies.

She continued by noting that what makes PAG what it is is the diversity of its participants and she does not take into consideration their political affiliation.

“This is why we have participants from all views, all cities and ages,” she said.

For Kadak, having people with different views in her projects invigorates her initiatives, as she says a divergence of opinion is necessary for fruitful discussions and solutions.

“We all join the discussion if there is a debate, and we solve the issue by further discussing the matter, as we comfortably criticize each other and think critically,” she said.

In response to a question about transforming PAG into a regional or a global initiative, Kadak said she has received requests from youth groups in different countries. She said she would like to focus on her many goals and projects in Turkey for the time being but may consider it in the future.

Initiatives like PAG are crucial for youth participation in politics, as active involvement in the policymaking process is needed for a healthy democracy. For instance, according to research by the Habitat Association, a whopping 78% of the youth in Turkey sees political participation solely as exercising their right to vote. Voting is the conventional means of political involvement, but political participation also entails nonconventional activities such as submitting petitions about local problems, joining demonstrations and participating in other means of activism, according to Bilgi University.

Youth-focused projects in the line-up

With countless projects on her mind, Kadak says she can only announce a few of them for now.

For instance, the young lawmaker, who loves animals and actively voices concerns about their treatment on social media platforms, told Daily Sabah that she will be launching a “shelter campaign” for them.

“With our activist animal lover friends, we will visit all shelters around Turkey, take note of shortcomings and create a report,” Kadak said, adding that she aims to improve the quality of animal shelters in Turkey and set an example for other countries, although they are remarkably better than those in Europe and other parts of the world.

On a different note, her #ÖnceÖğrenci (#StudentsFirst) initiative is set to launch soon, to ensure that universities across the country are accessible to all students.

“We have been thinking of a campaign to contribute to the enhancement of social spaces and universities to become disabled-friendly environments,” Kadak said, adding that the project details will soon be finalized. She noted that her team also aims to launch a social responsibility project to ensure that everybody can easily access information.

Another important project that the young lawmaker has launched in recent weeks is the #DahaHızlıDahaUcuz (#FasterandCheaper) campaign, which aims to speed up the internet and make it more affordable for people.

Some 79% of the Turkish population between the ages of 16 and 74 uses the internet, according to the Turkish Statistical Institute’s (TurkStat) data from 2020. The figure has more than doubled when compared to 2009 when it stood at 38.1%.

The use of and access to the internet have become especially vital during the COVID-19 pandemic, as schools across Turkey and the rest of the world have been teaching students through remote learning over the internet and TV.

Kadak does not believe the youth's apolitical stance is due to the fact they are drifting away from politics but rather that they have lost hope in it.

“The youth are not pleased about the aggressive, polarizing atmosphere of politics, which they refer to as ‘boomer politics’ among themselves,” Kadak said. She added that this was one of the reasons why it is critical for more young people to enter politics if they want to see more progressive, empathetic politicians who are result-orientated and can both mobilize and embrace all segments of society.

Kadak says her main goal is not to convince the 17 million youth of the country to believe they are represented in politics but to ensure that she paves the way for them to represent themselves.

"It should also not be sufficient for me to be a lawmaker in the Parliament to enhance youth participation in politics. I also have a responsibility to ensure that I pave the way for young people from all views and ideologies," Kadak said, noting that this was one of the reasons why she has undertaken the duty to create projects in which all young people can freely express themselves and platforms that they can all work together in.

"Doing something for the youth is nice but what is actually nicer is to do these things with the youth," Kadak said, adding, "what is important is to show the courage to say 'Come and let us solve this together' rather than saying 'Let us solve this for you.'"

Kadak says she would not like to be found extraordinary for appearance as a woman wearing the headscarf and age in Turkish politics, but rather with her work and ideas her work and ideas, adding she hopes more women and young people get involved in politics.

Kadak argues more women will join the decision-making process when equal opportunities are given to them, noting that people of all ideologies and ages should be in Parliament and politics.

She points out that while the 2017 Constitutional Referendum in Turkey paved the way for the younger generation to participate in elections, participation cannot be increased without courageous leaders.

“We are especially thankful to our President Recep Tayyip Erdoğan for his support, confidence and brave actions in this regard,” Kadak said.

Erdoğan pioneered the 18-article constitutional reform bill, which not only changed the current parliamentary system to a presidential one, but also lowered the age to become a lawmaker to 18 from 25. The move increased the number of seats in Parliament from 550 to 600, closed military courts and introduced same-day parliamentary and presidential elections every five years.

Meanwhile, women’s participation in Turkish politics has been increasing, but there is yet to be a female president, vice president or speaker of Parliament. Tansu Çiller, who served between 1993 and 1996, has been the only female prime minister of the country. While women’s participation in politics was 4.5% when the AK Party came to power, it has now reached over 17%. On a different note, according to data, there has also been a significant surge in the number of female mayors in Turkey, with the percentage of female mayors standing at 0.6% in 1999 and rising to 37% in 2014. However, only 340 out of over 9,500 lawmakers elected since 1935 are women, equating roughly about 2.7%, according to research by the now-defunct Prime Ministry.

‘Youth concerned about not being taken seriously’

According to Kadak, some of the most common problems voiced by the youth include education, women’s rights, animal rights and the environment, for which they expect solutions and understanding from politicians. She adds that she tries her best to address all of the problems and cooperates with academics and experts in the field when necessary.

Other common complaints include not being taken seriously and not being listened to, according to the Istanbul deputy.

“We were not born into the same world as the aged politicians. This is why we say we are not fully understood by others even if they listen to us,” Kadak said.

While many politicians meet with younger generations today, Kadak says they do not necessarily grasp the problems they face. The world has changed and so have our necessities, politicians need to realize these are real needs and not consider them luxuries, she adds.

Kadak is hopeful for the future, saying many politicians have realized the strength and importance of the younger generation, and that she feels confident expressing her ideas to her older counterparts.

"There has not been an instance in my two-year experience in politics that I thought I had not been taken seriously because I am aware of the significance of the values and projects that I defend and will do whatever it takes to ensure that this is understood by everyone," she said.