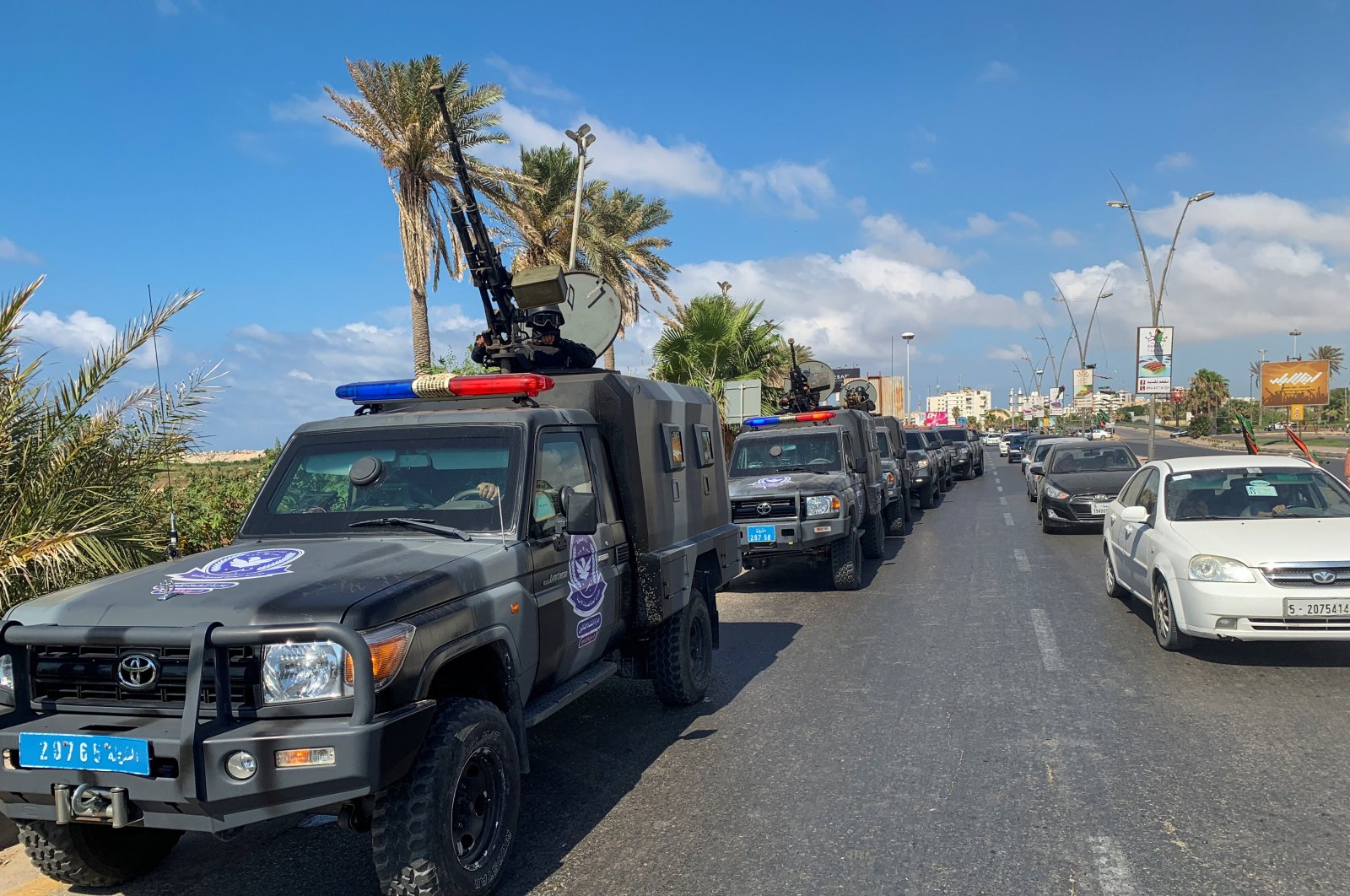 Security forces in military vehicles during a security deployment in Tripoli, Libya, July 20, 2020. (Reuters Photo)
by DAILY SABAH WITH AGENCIES Jul 22, 2020 9:48 am
RECOMMENDED

The Libyan parliament of U.N.-recognized Government of National Accord (GNA) on Tuesday slammed the Egyptian parliament's decision to authorize President Abdel-Fattah el-Sissi to intervene militarily in the war-torn country.

"We completely reject the Egyptian Parliament's decision based on an illegitimate invitation by those who claim to represent the Libyan tribes under the guise of "parliament,'" the Tripoli-based parliament said in a statement, referring to the parliament in Tobruk that is affiliated with putschist Gen. Khalifa Haftar and his illegitimate forces.

The GNA parliament also asked the government "to be prepared to politically and practically respond to this threat, and to consider every option to give the correct response."

In a move likely to worsen tensions in North Africa, Egypt's parliament approved a proposal Monday that empowers military intervention in neighboring Libya. In a secret vote, chaired by Parliament Speaker Ali Abdel Aal, the parliament authorized el-Sissi to "take all necessary measures to protect the country's national security.”

The decision came a week after the Tobruk parliament gave Egypt a green light to intervene militarily in Libya under the pretext of "protecting the national security" of both countries.

"Egyptian parliament approval of troops deployment outside its western borders is a declaration of war on Libya and violates Arab League and U.N. charters," Bashagha said late Tuesday in a tweet, which he later removed.

"Foreign forces on Libyan grounds are enemy. WE WILL NOT HESITATE to defend our nation's sovereignty, security and freedom," Bashagha said in the same tweet.

Germany's Foreign Minister Heiko Maas on Tuesday voiced Berlin's concern during a joint news conference with his Greek counterpart Nikos Dendias after their meeting in Athens.

"Decisions on military deployments cannot be welcomed, as they always bring the danger of further escalation," Maas said, adding that the German government has long been trying to de-escalate tensions in Libya, through talks with Libyan parties and regional actors.

Maas recalled that the parties to the conflict were seeking to control the provinces of Sirte and Jufra, and argued for creating "demilitarized zones" around these provinces to prevent further escalation of the conflict.

He also called on the Libyan parties to return to the 5+5 format talks for a sustainable cease-fire, which can pave the way for a political settlement.

The head of the International Union for Muslim Scholars (IUMS), Ali al-Qaradaghi, said on Twitter that el-Sissi should "take lessons" from the current war in Yemen, as well as the previous North Yemen Civil War in the 1960s, in which Egypt suffered serious losses during the administration of former President Gamal Abdel Nasser.

During the course of the five-year war in which Cairo backed the Yemen Arab Republic against royalists, from 1962 to 1967, Egypt suffered severe financial losses as well as heavy military causalities.

Al-Qaradaghi warned the authorization of intervention in Libya may have very dangerous consequences and questioned whether the Egyptian army wants to be destroyed again, leaving no country with a "strong army" in the vicinity of Israel.

Since April 2019, Haftar's illegitimate forces have launched attacks on the capital Tripoli and other parts of northwestern Libya, resulting in thousands of civilian deaths. But the government recently achieved significant victories, pushing Haftar's forces out of Tripoli and the strategic city of Tarhuna.

Haftar has been supported internationally by Russia, France, Egypt and the United Arab Emirates (UAE).

Amid the increasing regional tensions due to Egypt’s provocative move, global actors have continued diplomatic talks on the issue.

The leaders of Turkey and Germany have discussed developments in Libya, as well as Syria and the fight against the coronavirus, Turkey's Directorate of Communications said Wednesday.

Meanwhile, Turkish Foreign Minister Mevlüt Çavuşoğlu, who's on a three-day tour of West Africa, said on Tuesday those seeking a military solution in Libya will be frustrated, as only a political solution will work.

"The only solution in Libya is a political solution. We've been saying the same thing since the beginning," Çavuşoğlu told a joint news conference alongside his Nigerien counterpart Kalla Ankourao in the capital Niamey.

"Up to today, those who preferred a military solution were defeated in the field and failed," said Çavuşoğlu.

He added that those who turn their back on a political solution in Libya should know they do so in vain. "There is no other way," he said.

Presidential Spokesperson Ibrahim Kalın also said Turkey is adamantly opposed to Libya's partition, be it in principle or by law.

"We are absolutely against the breaking up of Libya, whether in reality, or on the map, or politically or geographically," Kalın said during an interview with CNN International. "That will be a devastating scenario. We have seen similar cases in Iraq, in Syria, in other places. We should draw lessons from that."

Kalın said the Turkish government would continue to support the UN-recognized GNA, accusing Haftar of sowing "havoc" in Libya.

"He has tried to push his way, and he is trying to divide Libya, or take control of Libya with no legitimacy at all," he said, adding Haftar has "violated every single agreement, ceasefire, or peace process over the last two years."

In another phone call, U.S. President Donald Trump and Abu Dhabi's Crown Prince Sheikh Mohammed bin Zayed Al Nahyan discussed regional security issues including the "importance of de-escalation in Libya through the removal of foreign forces" on Tuesday, the White House said. The crown prince is the de facto leader of the UAE.