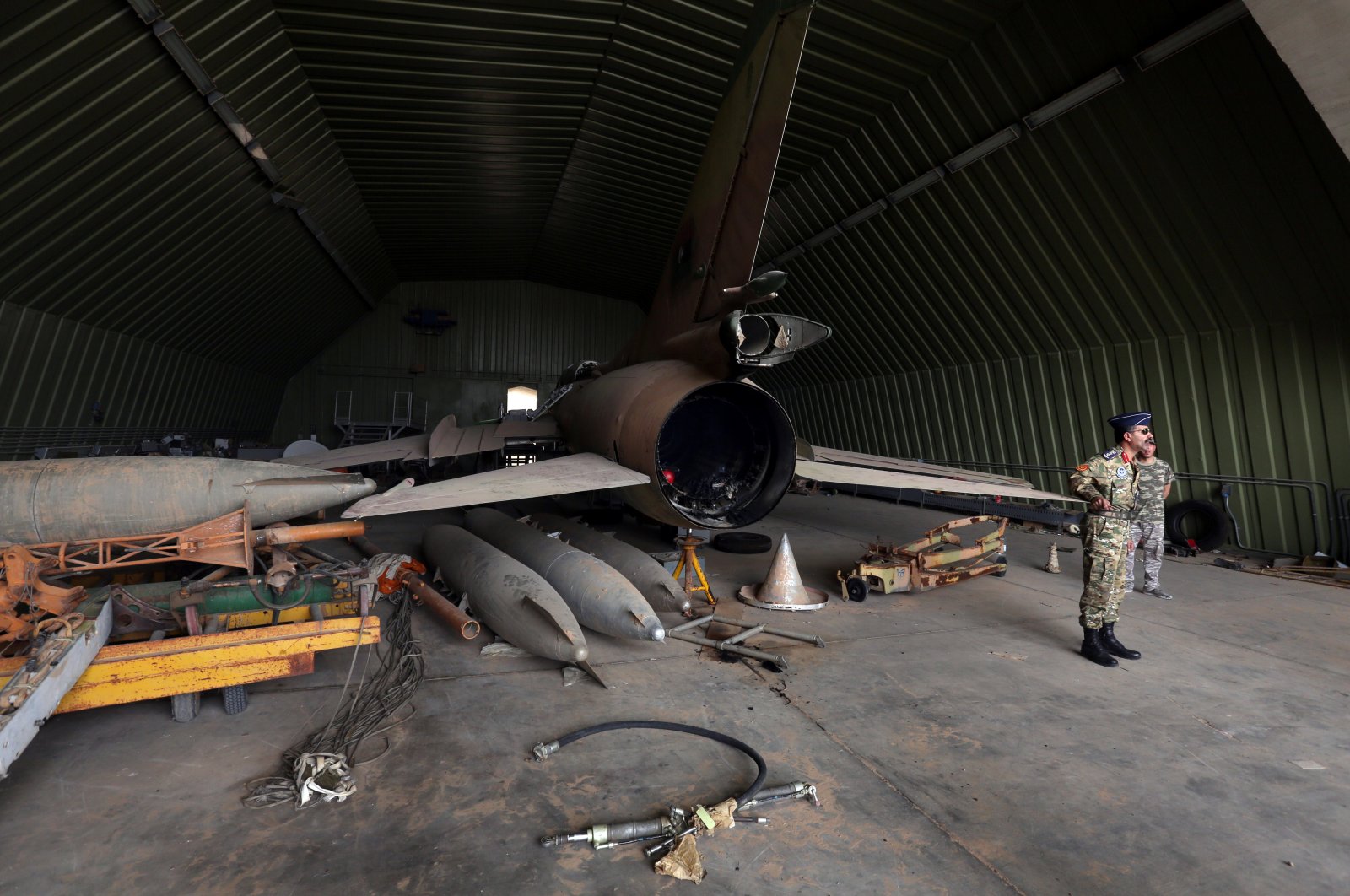 Members of Libya's internationally recognized government are seen after taking control of al-Watiya air base, southwest of Tripoli, Libya, May 18, 2020. (Reuters Photo)
by DAILY SABAH WITH AA May 20, 2020 12:32 pm
Edited By Gabriela Garver
RECOMMENDED

The Libyan Army on Wednesday destroyed three Russian-made air defense systems supplied by the United Arab Emirates to the forces loyal to putschist Gen. Khalifa Haftar in the city of Tarhuna, while the warlord’s forces announced that they would start withdrawing 2-3 kilometers (around 1.8 miles) from the fronts south of the capital.

Abdul-Malik Al-Madani, the spokesman for the government-led Volcano of Rage Operation, told Anadolu Agency that the Pantsir missile system, which was supplied to Haftar's militias by the UAE, has been demolished.

Images of an unmanned aerial vehicle (UAV) of the Libyan Army targeting a hangar were also shared on social media and by the local press.

Libya’s United Nations Ambassador Taher Al-Sunni told the U.N. Security Council that government forces captured a number of Russian-made air defense systems at the al-Watiya air base, destroyed UAE armored vehicles and found tons of high-tech weapons. “And before that, we shot down several long-range drones made in China,” he said.

Al-Sunni said government forces and their allies have also killed and captured UAE-recruited mercenaries from Chad, Sudan and Syria and those sent by Russia’s Wagner Group.

The Libyan Army had announced that after capturing the strategic al-Watiya air base in the western part of the country from Haftar's militias, they had captured an air defense system belonging to the militias.

The spokesman for Haftar's forces announced that as of midnight they would be withdrawing 2-3 kilometers from fronts south of Tripoli.

Ahmed Al-Mismari said on social media they will be pulling back so people in the capital can celebrate the Muslim holiday of Ramadan Bayram, also known as Eid al-Fitr, which marks the end of the holy fasting month of Ramadan.

There was no immediate response from the Government of National Accord (GNA) based in the capital. But Col. Mohamed Qanunu, a spokesman for the Tripoli-allied forces, appeared to dismiss the cease-fire proposal, tweeting that “there is no red line” and “any target that poses a threat ... will be bombed without exception.”

There was no information on the loss of lives or damage.

Meanwhile, the UAE foreign minister said his country’s position on the Libyan crisis "has been firm and clear and shared by the majority of the international community," even though they have been supporting warlord Haftar against the internationally-recognized government.

Anwar Gargash said on Twitter that the only acceptable path forward involves an immediate, comprehensive cease-fire and return to the political process.

"This crisis has been going on for almost 10 years; Libyans will not have the chance to create a stable or prosperous country until combatants aim higher than tactical territorial gains.

"These are mirages of victory and no substitute for a political process," Gargash said.

Haftar, the leader of illegal armed forces in eastern Libya, has intensified attacks on civilians since the beginning of May as the Libyan Army recently gained an advantage and inflicted severe losses on his militants.

The UAE has been sending mercenaries to support Haftar, while a company purchased six helicopters and two boats to raid ships off Libya in a move to support Haftar, according to a report by a U.N. panel. The GNA declared three air bases "occupied" by foreign forces. According to GNA military spokesman Mohammed Qanunu, the stations, al-Watiya, al-Jufra and al-Khadim, are being run by foreign countries, including the UAE.

The UAE-based company also purchased three French-built SA 341 attack helicopters from Gabon to deploy to Libya and two 20-person MRC1250 boats via Malta-based Sovereign Charterers for the mercenaries to use.

The top U.N. official in Libya warned Tuesday that the war in the North African country will “intensify, broaden and deepen” because of increasing foreign intervention and the influx of weapons, military equipment and mercenaries.

Acting U.N. special envoy Stephanie Williams said the escalation will have “devastating consequences for the Libyan people” who are “getting lost in the mix, their voices crowded out.”

She urged the U.N. Security Council to apply “consistent and credible pressure on those regional and international actors that are fueling the conflict.”

Williams’ video briefing to the council came a day after forces allied with Libya’s U.N.-supported government wrested control of al-Watiya air base on the outskirts of Tripoli from eastern-based forces under Haftar that have been trying to capture the city of 2 million people since April 2019. Loss of the air base in Tripoli’s southwestern desert reaches was a heavy setback for Haftar’s forces.

Since the ousting of late dictator Moammar Gadhafi in 2011, two seats of power have emerged in Libya: Haftar in eastern Libya, supported by Egypt and the UAE, and the GNA in Tripoli, which enjoys U.N. and international recognition.