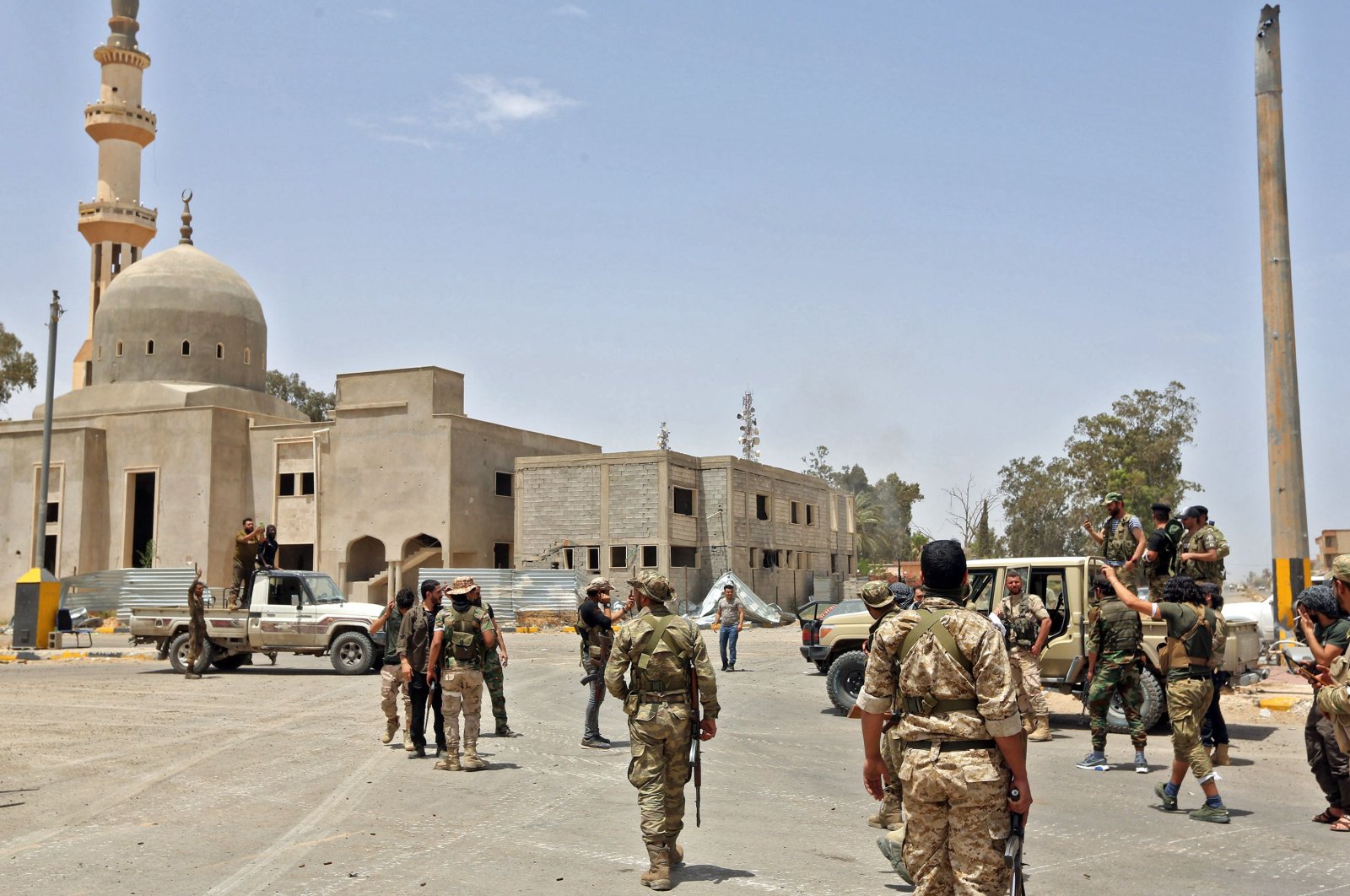 Fighters loyal to the U.N.-recognized Libyan Government of National Accord (GNA) celebrate together in the Qasr bin Ghashir district south of the Libyan capital Tripoli, June 4, 2020. (AFP Photo)
by DAILY SABAH WITH AGENCIES Jun 05, 2020 10:27 am
Edited By Eralp Yarar

The Libyan Army liberated putschist Gen. Khalifa Haftar's stronghold Tarhuna shortly after entering the city center with little resistance from the militia on Friday and now aims to head toward other strategic locations held by the warlord.

"Our heroic forces have extended their control over the whole of Tarhuna," Government of National Accord (GNA) spokesman Mohamad Qununu said.

"Our forces are combing the city as no resistance is seen from Haftar's militias after their withdrawal from there," Mustafa al-Majei, a spokesman for the Burkan Al-Ghadab (Volcano of Rage) Operation, told Anadolu Agency (AA) following the announcement of liberation.

The army noted that they aim to head toward Sirte, Al-Jufra and the oil fields in the south. The advance extends the control of the GNA and allied forces across most of northwest Libya, reversing many of Haftar's gains from last year when he raced toward Tripoli.

Al-Majei added that after combing Tarhuna, they will activate the national security directorate in the city along with the other security services there.

"This will take place in coordination with the Interior Ministry," he noted.

Later in the day, government forces found 106 dead bodies, including that of women and children, in a hospital in Tarhuna city.

Prime Minister Fayez al-Sarraj vowed that his government would impose its control over the whole of Libya.

"Our fight continues and we are determined to defeat the enemy, impose state control on the whole of the homeland and destroy all those who jeopardize the construction of a civil, democratic and modern state," Sarraj said after talks with President Recep Tayyip Erdoğan on Thursday.

The Libyan Army on Thursday announced the complete liberation of the capital Tripoli and that its forces were moving to liberate Tarhuna, the last stronghold of Haftar in western Libya.

In March, the Libyan government launched Operation Peace Storm to counter attacks on the capital, and recently regained strategic locations, including al-Watiya air base, in a major blow to Haftar's forces.

Meanwhile, warlord Haftar’s militias confirmed their withdrawal from the Libyan capital following the U.N.-recognized government's announcement that it is back in full control.

Haftar's spokesman Ahmad al-Mesmari claimed their withdrawal was a "humanitarian gesture intended to spare the Libyan people further bloodshed," but a recent report by the Human Rights Watch has shown that their forces plant landmines and other explosives in residential areas they are withdrawing from.

"An armed group and affiliates fighting for control of the Libyan capital Tripoli appear to have used antipersonnel landmines and booby traps there in late May 2020," the New York-based rights group said.

"Fighters affiliated with the Libyan Arab Armed Forces (LAAF) commanded by Khalifa Haftar, including foreign forces, appear to have laid mines as they withdrew from southern districts of the city," it said.

The report came days after the United Nations Support Mission in Libya (UNSMIL) said it was "extremely concerned about reports that residents of the Ain Zara and Salahuddin areas of Tripoli have been killed or wounded by Improvised Explosive Devices placed in/near their homes."

HRW said the antipersonnel mines discovered in Tripoli in May were "of Soviet and Russian origin."

Hundreds have been killed and 200,000 more driven from their homes since Haftar launched his attacks.

The U.N.'s Libya mission said Tuesday that after a three-month suspension, the warring parties had agreed to resume cease-fire talks.

A military commission made up of five GNA delegates and five Haftar representatives held talks in February, but the dialogue was suspended.

Immediately after the last cease-fire proposal, Haftar declared himself the sole ruler of Libya, dropping the U.N.-brokered Skhirat agreement signed in 2015 between Libyan warring sides – a move that was condemned by international actors and regional allies.

Haftar, however, was unable to overthrow the Tobruk-based House of Representatives and its speaker Aguila Saleh, as he enjoys major tribal support in east Libya.

Haftar is supported by neighboring Egypt and the United Arab Emirates as well as Russia. The UAE has also spent a fortune supporting Haftar, despite his failures. Although there has been an international arms embargo on the war-torn country in place since 2011, the Persian Gulf nation has been continually looking for ways to get heavy and strategic weapons to Haftar and his forces in eastern Libya to overthrow the government since 2014.

Hundreds of people in Libya's capital Tripoli celebrated its complete liberation from the militia of warlord Haftar.

The residents gathered late Thursday in the city's Martyrs' Square, holding the Libyan flags and banners of victory.

They also chanted slogans like "the blood of the martyrs is not in vain" and other slogans against Haftar.

In March, the Libyan government launched Operation Peace Storm to counter attacks on the capital, and recently regained strategic locations, including the al-Watiya air base and Tarhuna city, in a major blow to Haftar's forces.