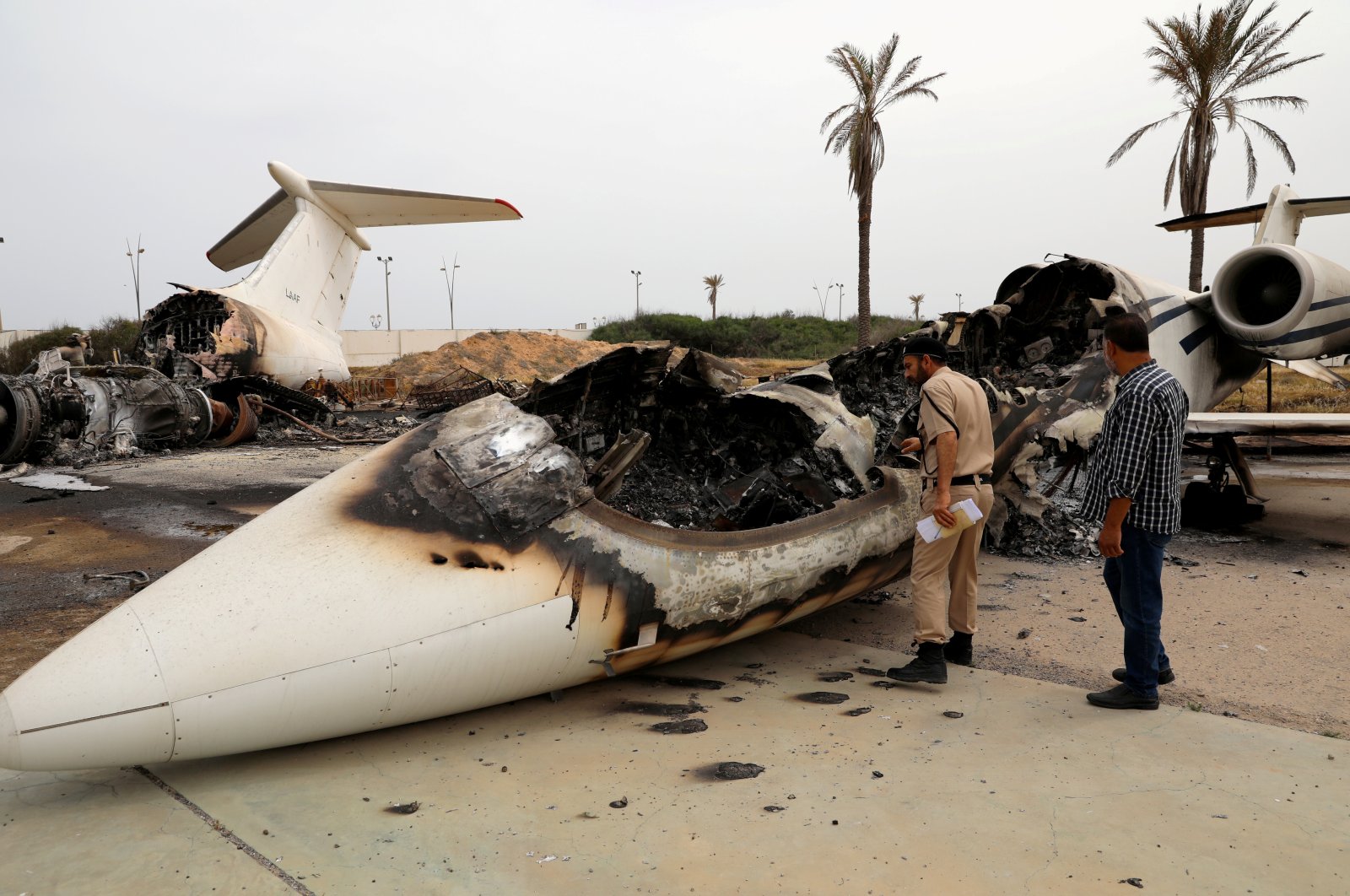 A policeman and a man inspect a passenger plane damaged by shelling at Mitiga airport, Tripoli, Libya May 10, 2020. (Reuters File Photo)
by DAILY SABAH WITH AGENCIES May 26, 2020 10:51 am
Edited By Nurbanu Tanrıkulu Kızıl

The Libyan Army paused operations for 48 hours during a withdrawal of Haftar's forces, while the U.N. condemned the putschist general's militias for laying IEDs as they retreat

The Libyan Army paused operations in Tarhouna, Bani Waleed and Nasma regions for 48 hours as the forces loyal to putschist Gen. Khalifa Haftar withdraw from the areas, a statement by the press office of Operation Volcano of Rage said Monday.

The military will continue to carry out aerial surveillance in the area, the statement said, adding that any forces heading toward the north will be targeted, Anadolu Agency (AA) reported.

“UNSMIL is extremely concerned about reports that residents of the Ain Zara and Salahuddin areas of Tripoli have been killed or wounded by Improvised Explosive Devices placed in/near their homes,” a statement by the UNSMIL said, adding that the civilians were deliberately targeted as they are celebrating the Eid holiday.

The mission also lauded the work of Libyan Police and Military Engineers who have received training from the U.N. and are striving to clear IEDs from the areas.

Meanwhile, the members of the Tobruk-based pro-Haftar assembly on Monday rejected an attempted coup by the warlord.

This came in a statement issued by 11 prominent members of the Tobruk-based assembly in which they stressed support to a peace initiative proposed by its speaker Aguila Saleh.

Notably, the assembly currently holds its sessions with only some one-fifth of its 200 members.

With the continuous defeats of Haftar in the battlefield against Libyan government forces, Saleh announced late April a proposal to reach a political solution to the crisis.

Immediately after the proposal, Haftar declared himself the sole ruler of Libya, dropping the U.N.-brokered Skhirat agreement signed in 2015 between Libyan warring sides, the move which was condemned by international actors and regional allies.

Haftar, however, was unable to overthrow the Tobruk-based House of Representatives and its speaker Saleh -- who was seen as a subordinate of Haftar -- as he enjoys major tribal support in East Libya.

On Sunday, Salem Alaywan, Mayor of the town Bani Walid said that the Wagner Group, which supported Haftar, left the country.

Burkan Al-Ghadab went on to say that it had on Sunday spotted seven military cargo planes that arrived at the same airport.

It pointed out that the seven aircraft brought ammunition and military equipment before being boarded by the Russian mercenaries, adding that 1,500 to 1,600 mercenaries had fled clashes against government forces around the capital Tripoli to the Bani Walid area.

Meanwhile, the Secretary-General of the International Union of Muslim Scholars supported the Libyan Army’s efforts against Haftar’s forces.

In a statement posted on his Facebook account, Ali al-Qaradaghi praised the Libyan Army’s advances against Haftar militias.

“The victories won in Libyan land are the victory of revolution against dictatorship and oppression,” al-Qaradaghi said, adding that the ongoing clashes in the region show the struggle between the will of the people and dictatorship.

The deputy chair of the Sudanese Sovereign Council, Gen. Hamdan Dagalo, has claimed that none of their troops have any involvement in Libya.

Speaking on Sudan 24 TV channel, Dakalu said they are not on the side of any factions in Libya and that they do not have any troops in the country.

He also rejected claims that his troops are working as mercenaries in Libya.

According to reports, hundreds of young people had been given UAE visas by travel agencies following advertisements in local newspapers for Sudanese men to work as security guards for a UAE firm called Black Shield. These young people, seeking jobs abroad to earn money due to poverty in Sudan, were first taken to the UAE for a monthly salary of $500. There, the young people were trained in military camps located in the desert, without being told that they would be sent to war zones in Libya. Then, they were transferred to Ras Lanuf oil terminal in Libya to protect Benghazi and its surrounding oil fields. They claimed they were not given a choice to work in the UAE or Libya, and some of them found themselves in Benghazi, Libya, even though they were told that they were in the eastern part of the Emirati kingdom.

The government, also known as the Government of National Accord, has been under attack by Haftar's forces since April 2019.

His illegal forces in eastern Libya have launched several attacks to capture Tripoli, with more than 1,000 killed in the violence.

The government launched Operation Peace Storm on March 26 to counter attacks on the capital. Following the ouster of late ruler Moammar Gadhafi in 2011, Libya's new government was founded in 2015 under a U.N.-led political deal.