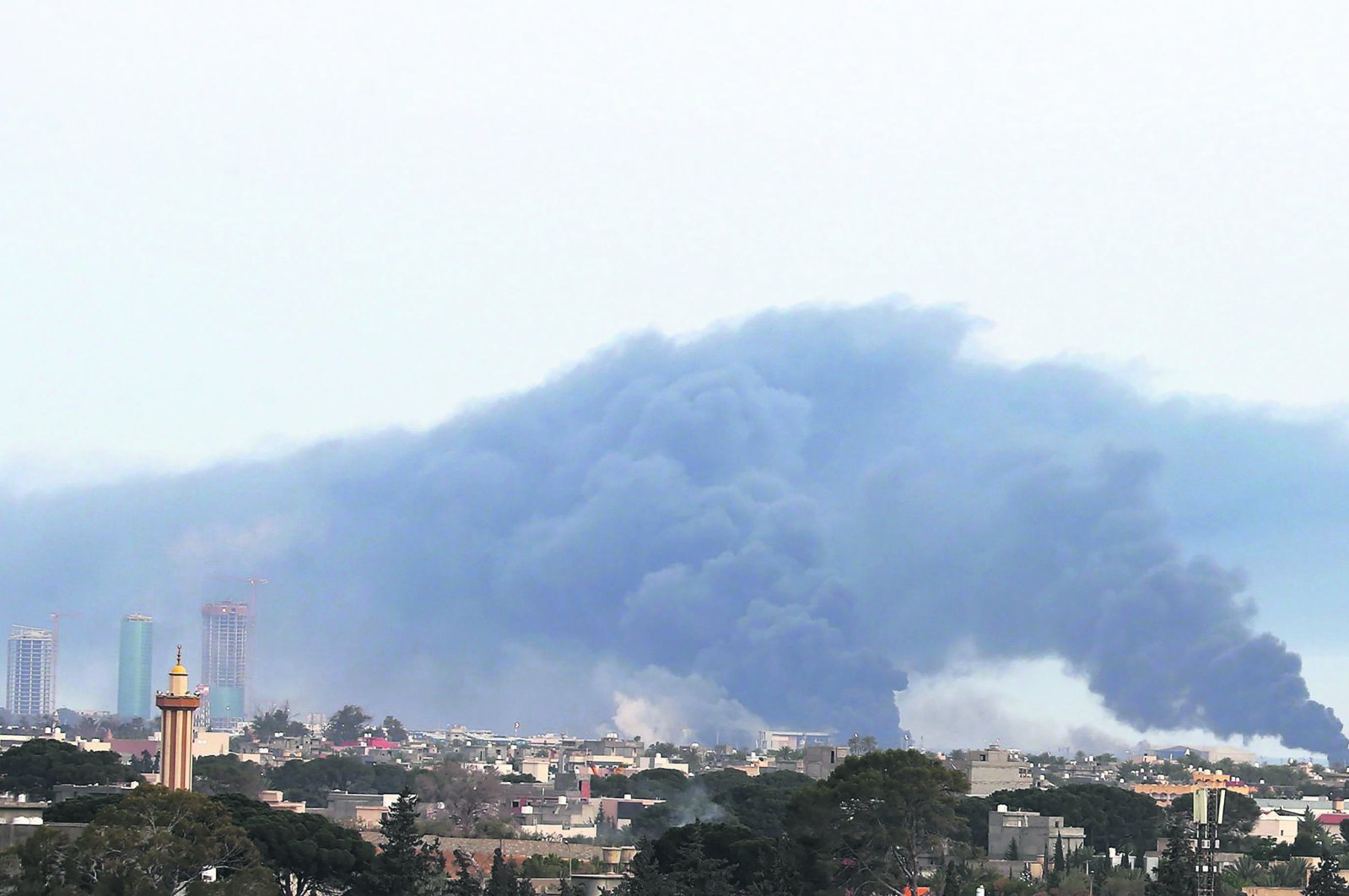 Smoke plumes rise above buildings in the Libyan capital Tripoli, during reported shelling by putschist Gen. Khalifa Haftar's forces, May 9, 2020. (AFP Photo)
by DAILY SABAH WITH AA May 18, 2020 10:38 am
Edited By Dilara Aslan
RECOMMENDED

The victory was announced by the media office of the government-led Burkan Al-Ghadab (Volcano of Rage) Operation, citing Osama al-Juwaili, the commander of Operation Peace Storm.

The army shared images from the air base, showing damaged aircraft inside one of the hangars, Demirören News Agency (DHA) reported.

"Our hero forces have completely taken control of the Al-Watiya air base," Ossama Goweli, the commander of the joint operations room of the armed forces, said.

Libyan Prime Minister Fayez al-Sarraj on Monday praised the country's retaking of the Al-Watiya air base.

"We proudly announce the liberation of Al-Watiya military base from the grip of criminal militias," al-Sarraj, who is also the commander-in-chief of the Libyan Army, said in a statement.

He went on to say: "Today's victory does not mark the end of the battle. Rather, it brings us closer to the big day of victory by liberating all cities and regions and permanently eliminating the (Haftar-led) project of domination and tyranny."

Haftar’s forces took control of Al-Watiya in 2014 and had been using the air base as the command center for their operations in the west.

The Libyan army on Monday shot down another Hafter air defense system southwest of the capital.

Libyan military spokesman Col. Mohamed Qanunu said in a statement that the airstrikes were carried out against Haftar militias south of the city of Sirte.

A Russian-made Pantsir-type air defense system supplied by the United Arab Emirates (UAE) and an electronic jammer were destroyed in the airstrikes, Qanunu added.

Following Monday's victory, the Libyan army said it will move to liberate the city of Tarhouna, located around 140 kilometers (87 miles) southwest of the capital Tripoli.

Lt. Gen. Mohammed Al-Sharif, chief of staff of the Libyan army, told Libyan Al-Ahrar TV that his forces are getting ready to liberate regions south of Tripoli from Haftar's militias, including Tarhouna.

Meanwhile, three civilians were killed in a bombardment by Haftar's forces in the Qarabouli region east of the capital Tripoli, Anadolu Agency reported.

On Sunday, the Libyan army shot down another air defense system and a drone in airstrikes against Haftar militias at Al-Watiya air base.

On Saturday, the army destroyed the first Pantsir system supplied by the UAE.

Al-Watiya is seen as a key air base, second only to Mitiga International Airport near Tripoli. It was captured in 2014 by Haftar, the leader of illegally armed forces in eastern Libya, who used it as his headquarters for operations.

The Libyan Army recently liberated many towns from Haftar’s militia as part of Operation Volcano of Rage. After that, the military launched an operation to take Al-Watiya air base, located 140 kilometers southeast of Tripoli, from Haftar. The airstrike came as a part of operations to cut supplies to Haftar's militias.

Following the ousting of late dictator Moammar Gadhafi in 2011, Libya's legitimate government was founded in 2015 under a U.N.-led political deal. Since April 2019, the Government of National Accord (GNA) has been under attack by Haftar's forces, based in eastern Libya, and more than 1,000 people have been killed in the violence. In the past few weeks, the GNA has made significant gains against forces loyal to warlord Haftar, supported by France, Russia, the UAE and Egypt, while some provinces announced their support for the official government after months of bombing and shelling by Haftar on civilians, hospitals and schools.

The United Nations says hundreds have been killed and more than 200,000 displaced in the year since Haftar launched his battle for Tripoli, which quickly ground to a bloody stalemate.