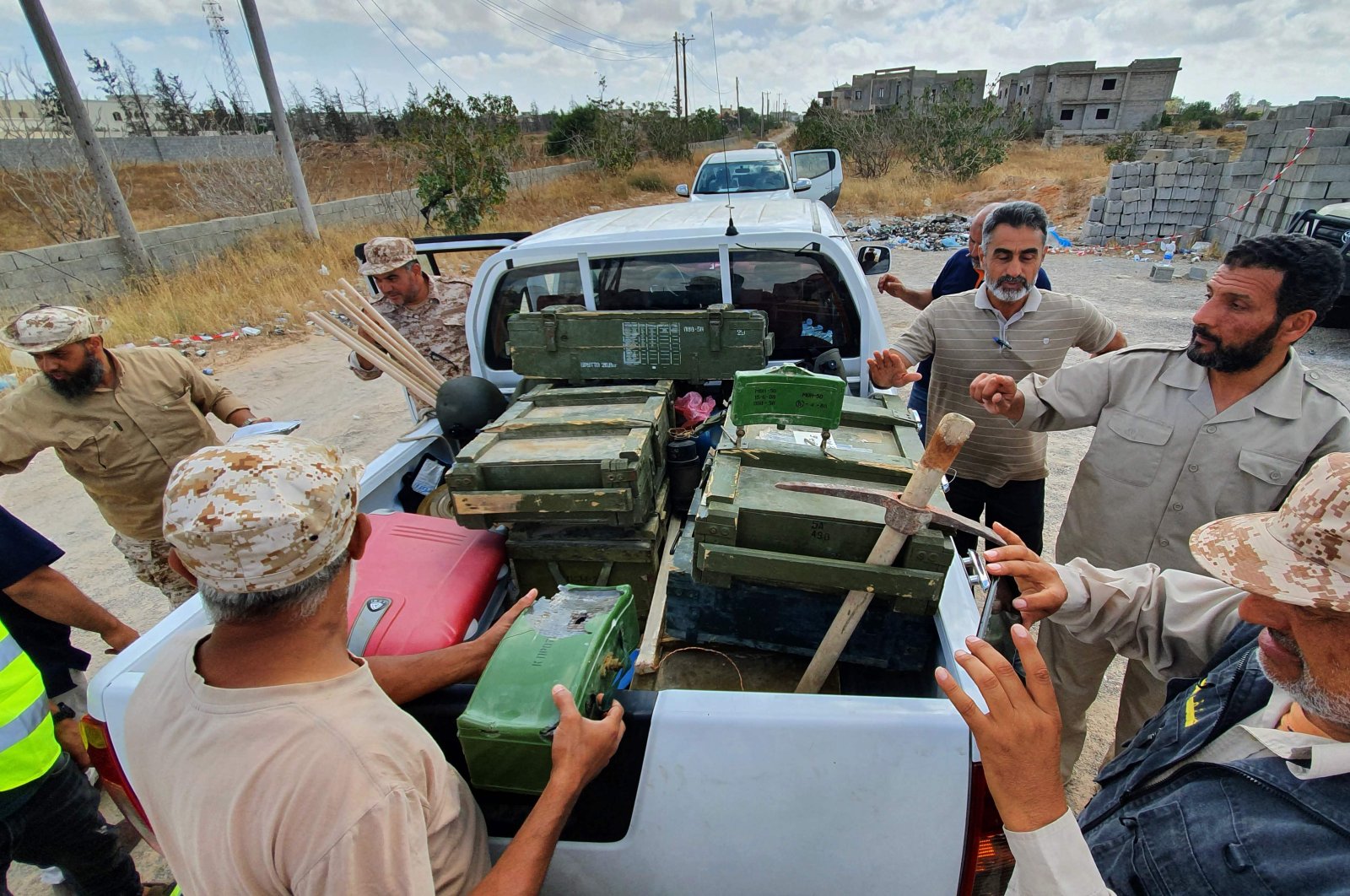 Libyan deminers stand around a pickup carrying boxes of dismantled mines and recovered remnants of ammunition in the Salah al-Din area, south of the Libyan capital Tripoli, June 15, 2020. (AFP Photo)
by DAILY SABAH WITH AGENCIES Jun 17, 2020 11:40 am
RECOMMENDED

Foreign Ministry spokesman Muhammad al-Qiblawi in a statement on the ministry's social media account said Sarraj, in his message to the U.N. Support Mission in Libya, asked them to provide the necessary assistance to the country's authorities to investigate the crimes and violations committed in the south of the capital city of Tripoli and city of Tarhuna.

He underlined that Sarraj said U.N. assistance in the field of technical support, human rights consultancy and documentation of violations will be useful at this stage.

Al-Qiblawi also said the Libyan government wanted the criminals to be caught and punished in accordance with the law after a transparent trial over the mass graves unearthed in Tarhuna and mines buried in regions south of Tripoli.

Separately, Nasr Gita, undersecretary of the Libyan Ministry of Justice, said the International Criminal Court should take responsibility for investigating the mass graves and corpses found in Tarhuna, which was recaptured by the Tripoli-based government from Haftar's militias in early June.

After many civilian mass graves were found in Tarhuna, the Libyan government said Haftar's militias should be investigated "on the grounds of planting explosives, mines in civilian areas, executions and torture" and called on to the international community to take action.

On Wednesday, Gita said some countries – without naming them – are working to form a neutral fact-finding mission to look into violations committed by Haftar's militias in southern Tripoli and the city of Tarhuna.

"Libyan authorities continue to document these violations in order to bring perpetrators to justice," he told a press conference in Tripoli.

The internationally recognized government in Tripoli has been under attack by Haftar's forces since April 2019, with more than 1,000 killed in the violence.

The government launched Operation Peace Storm against Haftar in March to counter attacks on the capital and recently regained strategic locations.

Oil-wealthy Libya has been in turmoil since a 2011 revolt toppled long-time dictator Moammar Gadhafi and has become a battleground for rival proxy forces.

The Government of National Accord (GNA) is allied with Turkey and Qatar, while Haftar is supported by Egypt, Russia and the United Arab Emirates.

Italy also called Tuesday for an "independent and transparent" probe aimed at finding and punishing those responsible for the recently discovered mass graves.

According to data released by the U.N., more than 150 bodies – including those of women and children – have been exhumed so far from a total of eight mass graves, most of them in Tarhuna.

"The Italian government expresses its astonishment over the recent discovery," said a statement issued by the Foreign Ministry, adding that its call for an independent probe echoes similar ones by U.N. Secretary-General Antonio Guterres and EU High Representative Josep Borrell.

Italy also asked "all the parties involved in the conflict in Libya to fully respect human rights and international humanitarian laws."

Libya’s Red Crescent official Faisal Jalwal told a press conference in Tripoli on Tuesday that the 37 bodies recovered from mass graves in recent days have been taken to a hospital in Misrata city.

Another 106 bodies were found at the Tarhuna hospital, Jalwal said, adding that specialized teams are trying to identify them.

While Haftar forces continue retreating during the Libyan Army’s advance, the planted bombs and mines by Haftar’s militias have been also threatening civilians’ lives.

The Turkish army's bomb disposal units have been defusing explosives planted in Libya's capital Tripoli, thus enabling the safe return of civilians to their homes.

The bombs were defused by teams in collaboration with the Turkish air force.

The mines and explosives planted in the surroundings are made from a specific type of wiring, which is very hard to detect, and are placed near houses and doorways.

Some of the bombs had a high explosive impact and are said to have originated from former Soviet countries, experts said.

The teams took extra care for their own personal safety while ensuring that the buildings remain intact during controlled explosions.

The Libyan Army has reportedly also found anti-personnel and anti-tank mines hidden in a house.

Mercenaries working with Russian security firm Wagner Group had to retreat to the country's east after being defeated in Tripoli, leaving mines and explosives in their wake.

A house in Salahuddin province was found with insults scrawled on the walls in Russian. One of them said "Zenit Champion," in honor of the St. Petersburg side.

The house contained many traces of the mercenaries' presence, including two mines planted in the kitchen. One of these was an anti-personnel mine, while the other was an anti-tank device, which has the power to bring an entire house down, bomb experts said.

The Wagner security firm belongs to Yevgeny Prigozhin, who is known by the nickname "Chef," as he is responsible for catering in the Kremlin Palace.

The firm is known for sending mercenaries to Syria, Ukraine, Libya and a number of African countries.

Wagner's name cropped up often in regard to Russia's illegal annexation of Crimea and Moscow's support for separatist movements in eastern Ukraine.

According to U.N. reports, Wagner has more than 1,000 mercenaries working for Haftar in Libya.

In the last 10 days, mines and explosives planted by Haftar militias have claimed at least 30 civilian lives and wounded over 41, according to the Libyan Army's Volcano of Rage Operation press office.

The Libyan government says Haftar's militias are planting explosives banned by international agreements in civilian settlements and they should be charged and "put on trial for war crimes."