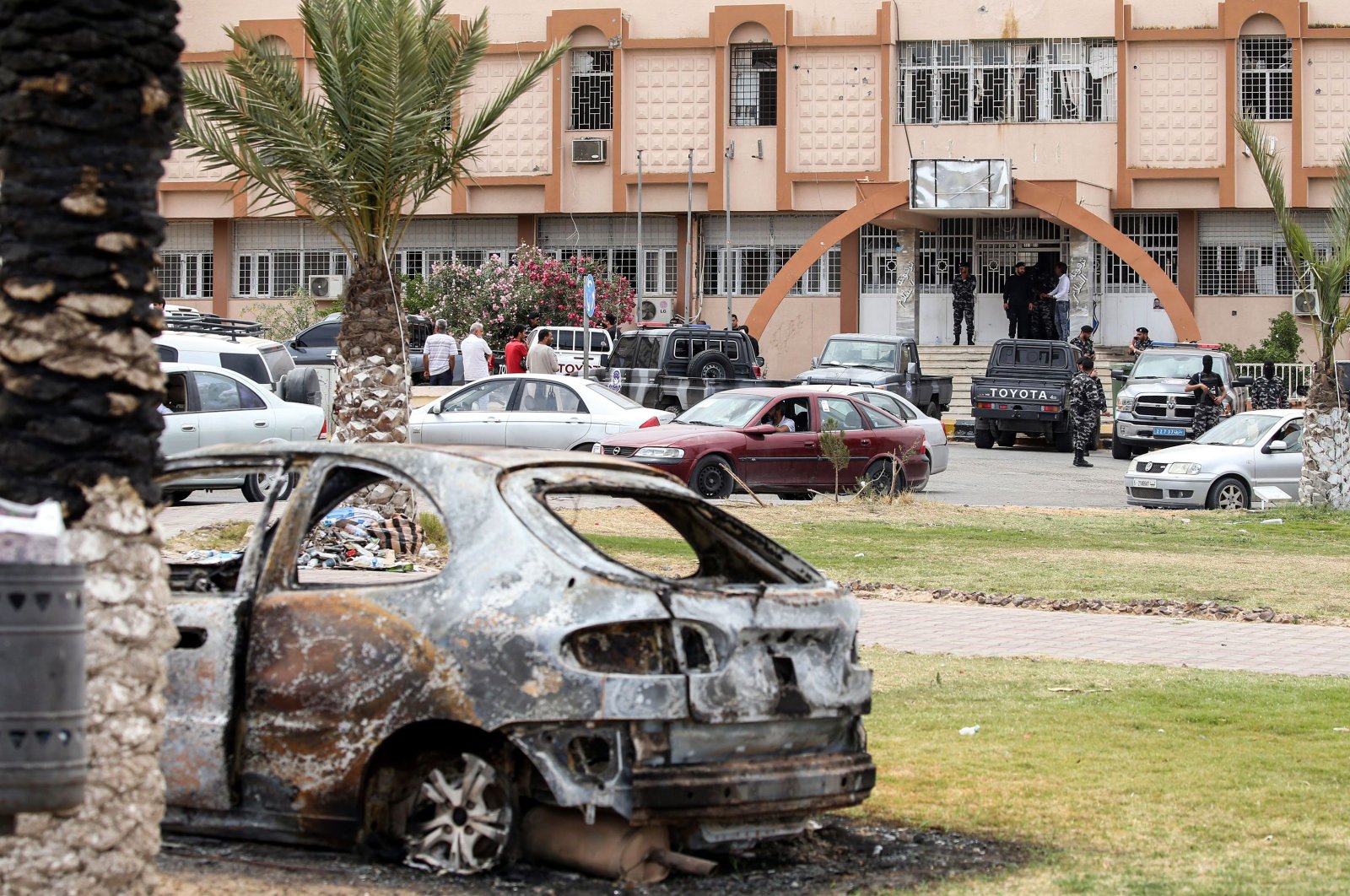 A view of the exterior of a local security precincet that was taken over by security forces affiliated with the Libyan Government of National Accord (GNA)'s Interior Ministry in the town of Tarhuna, June 11, 2020. (AFP)
by DAILY SABAH WITH AA Jun 14, 2020 11:41 am
RECOMMENDED

As the conflict in Libya continues to escalate, the Libyan government stated on Saturday that it was ready to welcome initiatives to put an end to the war.

Releasing a statement from his Twitter account, the Interior Minister of the Government of National Accord (GNA) Fathi Bashagha said that they were welcoming peace initiatives that would guarantee a civil government that is in accordance with the people's will.

"Neglecting the honorable people who have given all for a civil, democratic state as well as a secured capital in Tripoli, means to resume the chaos and divide the power of the state," expressed Bashagha, addressing the Libyan people.

"There is no place in Libya for the war criminals who attempted to grasp the state power through military power," he added, referring to putschist Gen. Khalifa Haftar and his constant attacks.

The Libyan Army has recently inflicted heavy blows on the renegade commander, liberating both Tripoli and Tarhuna from the hands of his militants.

The first was the Skhirat agreement, back on Dec. 17, 2015. These U.N.-brokered talks brought together delegations from Haftar's Tobruk-based House of Representatives (HoR) and the Tripoli-based General National Congress (GNC), who agreed to form a presidential council that would lead a government of national accord and a higher state council (parliamentary advisory) composed of members of the GNC, in addition to extending the mandate of the HoR after its expiry in the same year.

Although this agreement was formed under the auspices of the United Nations and approved by HoR and received unprecedented popular support from most of the Libyan parties, Haftar strongly opposed it as it gave the Presidential Council the power to sack him.

Haftar incited the deputies loyal to him, headed by HoR Speaker Aquila Saleh, to disrupt the implementation of the agreement, by creating chaos in the parliament to prevent the ratification and approval of the GNA.

He then pressured members of the Presidential Council to withdraw with a view to disrupting its work. However, Haftar and Saleh failed to withdraw international recognition from the GNA.

The second initiative was at the Paris meeting on July 25, 2017.

French President Emmanuel Macron, one of the biggest supporters of Haftar, hosted Libyan Prime Minister Fayez Sarraj and the putschist general. They agreed on a cease-fire and implementation of the Skhirat agreement. The French initiative stated that elections would be held in the spring of 2018.

After the failure of elections to be held in the spring of 2018, as stipulated in the Paris meeting, the French president held a new international conference at the Elysee Palace with the four main parties to the Libyan crisis, namely: Sarraj, Haftar, President of the Supreme Council of State Khalid Al-Mishri and Aguila Saleh. The move marked the third attempt to work out a cease-fire.

Representatives from 20 countries, including Turkey, Algeria, Qatar and Tunisia, in addition to Egypt, the United Arab Emirates (UAE), Saudi Arabia and Kuwait, participated in the conference.

It was agreed to hold presidential and parliamentary elections on Dec. 10, 2018 and to lay the constitutional foundations for the elections and to adopt the necessary electoral laws by Sept. 16, 2018.

But pro-Haftar MPs procrastinated and tried to derail the political, legal and constitutional track, setting impossible conditions to block the holding of elections.

As the fourth attempt, Rome responded to the Paris conference on Nov. 12-13, 2018 by holding a conference in which Sarraj and Haftar were brought together under the auspices of Italian Prime Minister Giuseppe Conte.

The Palermo Conference was attended by delegations from 38 countries, including Turkey, Egypt, Russia, the U.S. and Algeria, during which it was agreed to hold elections in the spring of 2019.

On Feb.27, 2019, in a fifth attempt, Sarraj and Haftar met under the auspices of UAE Crown Prince Mohammed bin Zayed, the biggest supporter of the putschist general. The meeting had no significant outcome nor resulted in any agreement. The U.N. mission in Libya (UNSMIL) only announced that an agreement had been reached to end the transitional phase in Libya through holding general elections, without providing details or dates for the polls.

However, local and international media talked about the two parties discussing the possibility of establishing a mini "National Security Council" in which the powers are divided between Haftar and Sarraj. Such reports were never confirmed or denied by officials.

The meeting took place at a time when Haftar's militias were controlling all major cities and towns in the southern Fezzan region, without strong resistance from the forces loyal to the government.

The sixth attempt took place on April 14, 2019. The U.N. was counting on this conference to end the Libyan crisis, as part of a road map put forward by former U.N. Envoy Ghassan Salameh that aimed at amending the Skhirat agreement and holding a conference between only the Libyans before elections.

During this stage, the constitutional declaration was amended at the parliamentary level and electoral laws were discussed, even though the meetings of the deputies did not reach a quorum at the time. The Elections Commission also began preparing the lists of candidates.

U.N. Secretary-General Antonio Guterres went to Libya on April 4, 2019, to increase the chances for the success of the conference. But Haftar took advantage of the political distraction to attack the capital Tripoli, thus quashing U.N. and international efforts to end the crisis.

After this sixth failure, new hopes for a cease-fire also floundered in 2020. A Turkish-Russian initiative succeeded in convincing the Libyan parties to a cease-fire on Jan. 12. Separate meetings were held, which included both Haftar and Aguila Saleh on one hand, and Sarraj and Al-Mashri on the other hand, under the auspices of President Recep Tayyip Erdoğan and Russian President Vladimir Putin. A permanent cease-fire agreement was to be signed, yet Haftar fled to Benghazi without signing the agreement.

This was followed by another attempt within a week, as this time Germany decided to shoulder the responsibility. In coordination with the U.N., a second conference was attended by 11 countries, including the five permanent members of the U.N. Security Council, Turkey, Italy, Algeria, Egypt and the UAE, in addition to the U.N., European Union, African Union and the Arab League.

Haftar and Sarraj also attended the conference but did not meet. Haftar did not sign the final statement, which included terms for a cease-fire. Additionally, his militia shelled the Libyan capital just one day after the conference.

The ninth and final attempt kicked off on Feb. 18 in Geneva, Switzerland, under the auspices of the U.N., in which five officers from the legitimate government and five of Haftar's military men met to speak on military, political and economic matters.

But the legitimate government suspended its participation in the talks on Feb. 19 after Haftar's militias bombed the port of Tripoli for the first time since the beginning of its aggression against the capital, in violation of the declared cease-fire between them.