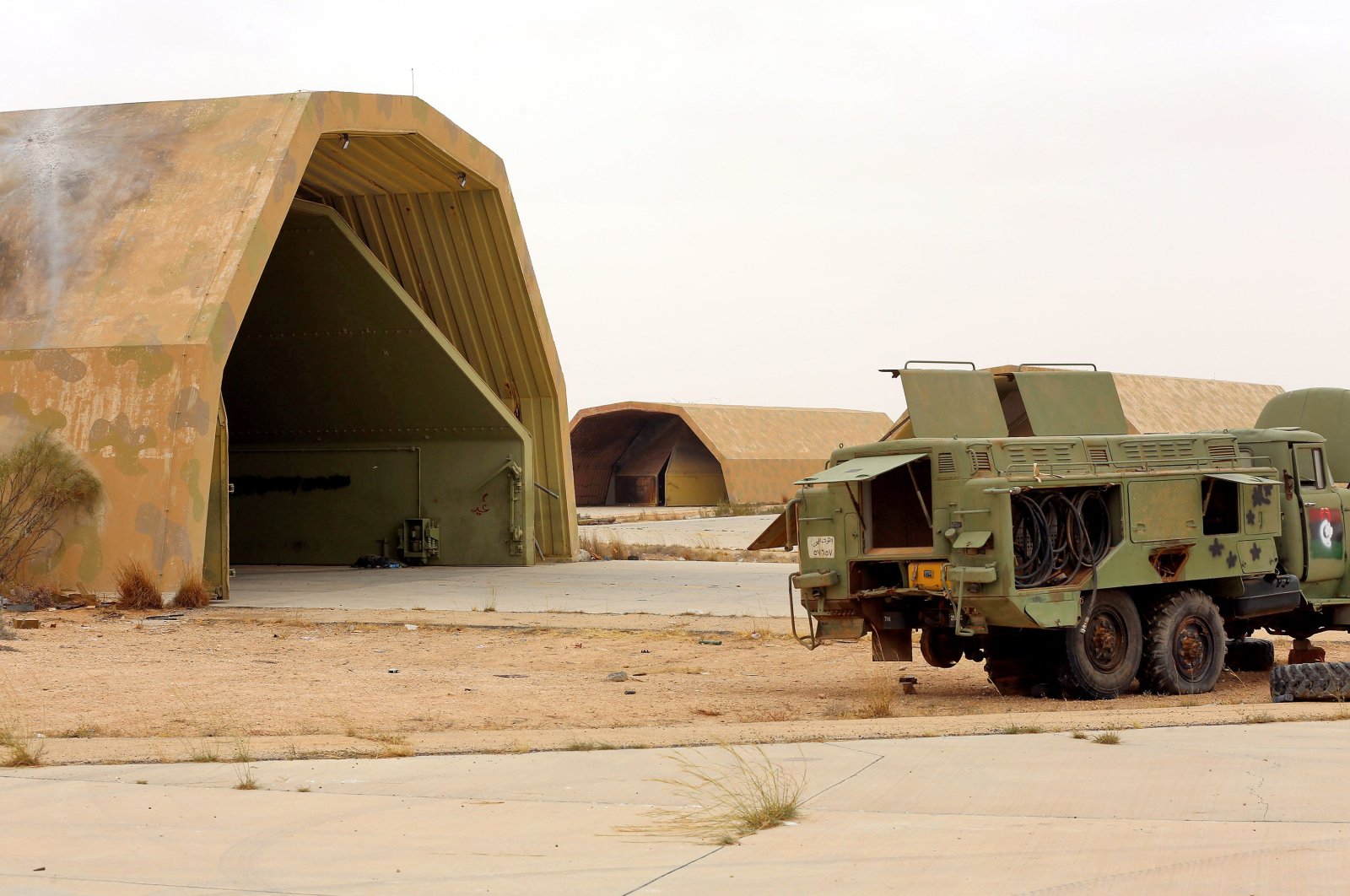 Vehicles are seen outside a hangar at al-Watiya air base, which was seized by forces loyal to Libya's U.N.-recognized Government of National Accord (GNA), southwest of the capital Tripoli, May 18, 2020. (AFP Photo)
by DAILY SABAH May 20, 2020 1:32 pm
Edited By Gabriela Garver
RECOMMENDED

Libya's Interior Minister Fathi Bashagha on Wednesday blamed the current crisis in his country on the interference of the United Arab Emirates in Libyan affairs and its support to putschist Gen. Khalifa Haftar’s forces, which not only dragged the country into turmoil but also cost the lives of many Libyans.

Bashagha slammed a statement by the UAE calling for a cease-fire and a return to a political process after Abu Dhabi caused chaos in the country by supporting the warlord. The UAE’s statement came after Haftar endured major losses, including the loss of a crucial air base.

"The crisis in Libya would not have happened had you stopped your malicious interference in our internal affairs, your support to putschists, dispatch of weapons ... and your incitement to violence through your deceptive media," Bashagha said on Twitter, responding to UAE Minister of State for Foreign Affairs Anwar Gargash.

"You have used your deceptive media, corrupt money and continuously violated UN resolutions that ban arms exports to Libya in quest of establishing another dictatorship in the region," he said.

The UAE position on the Libyan crisis "has been firm and clear and shared by the majority of the international community," Gargash said.

"This crisis has been going on for almost 10 years; Libyans will not have the chance to create a stable or prosperous country until combatants aim higher than tactical territorial gains. These are mirages of victory and no substitute for a political process," he added.

The Libyan government has repeatedly accused the UAE and other regional states of supporting Haftar's military campaigns against the internationally recognized government in Tripoli.

On Monday, the Libyan Army retook al-Watiya air base, which had been occupied by Haftar's militias for six years.

The move came after the Libyan Army destroyed three Russian-made Pantsir type air defense systems used by Haftar's forces that were supplied by the UAE.

Following the official Government of National Accord’s (GNA) victories against Haftar, who has been trying to seize the capital illegally for years, claims have been emerging that the warlord’s foreign backers are preparing to withdraw their support.

Egypt and the UAE, two of the principal backers of Haftar’s so-called Libyan National Army (LNA), have decided to abandon the putschist after more than a year of a failed military campaign to take Tripoli, Egyptian media outlet Mada Masr wrote Tuesday, citing Libyan and Egyptian officials.

Egypt and the UAE have decided Haftar is “on his way out,” a Libyan political source close to the beleaguered general told Mada Masr, while an Egyptian official, who spoke on condition of anonymity, echoed the Libyan political source, saying: “The question today for the Egypt-UAE-France alliance that has supported Haftar to this point is to decide on their next move in view of Haftar’s defeat. No one can bet on Haftar again.”

A sign of the setback Haftar experienced was given when his forces pulled back from parts of Tripoli. Haftar militia's spokesman Ahmed al-Mismari said the force had carried out a "redistribution and repositioning in the battlefronts, disengaging from some crowded residential areas.”

The GNA’s retaking of the al-Watiya air base is the biggest setback for Haftar since launching a renewed offensive on Tripoli. Haftar’s forces took control of al-Watiya in 2014 and had been using the air base as the command center for their operations in the west.

Previously this month, the GNA declared three air bases "occupied" by foreign forces. According to GNA military spokesman Mohammed Qanunu, the stations, al-Watiya, al-Jufra and al-Khadim, are being run by foreign countries, including the UAE. The air bases are used as "launching pads for aircraft bombing civilian targets and state installations, which has killed hundreds of civilians, including children and women, and destroyed schools and hospitals," he added.

The UAE has been a strong supporter of the warlord for years, spending large amounts to finance his offensive on the U.N.-backed government in Tripoli. The U.N. also revealed that the UAE has been supporting Haftar with arms and mercenaries.

A report by a U.N. panel of experts said that the foreign mercenaries were affiliated with Lancaster 6 DMCC and Opus Capital Asset Ltd. FZE, both registered at free zones in the UAE.

The report was shared with the U.N. Security Council's (UNSC) sanctions committee in February, according to two diplomats who spoke to American news outlet Bloomberg.

They told Bloomberg that the two companies supplied "Haftar's forces with helicopters, drones and cyber capabilities through a complex web of shell companies."