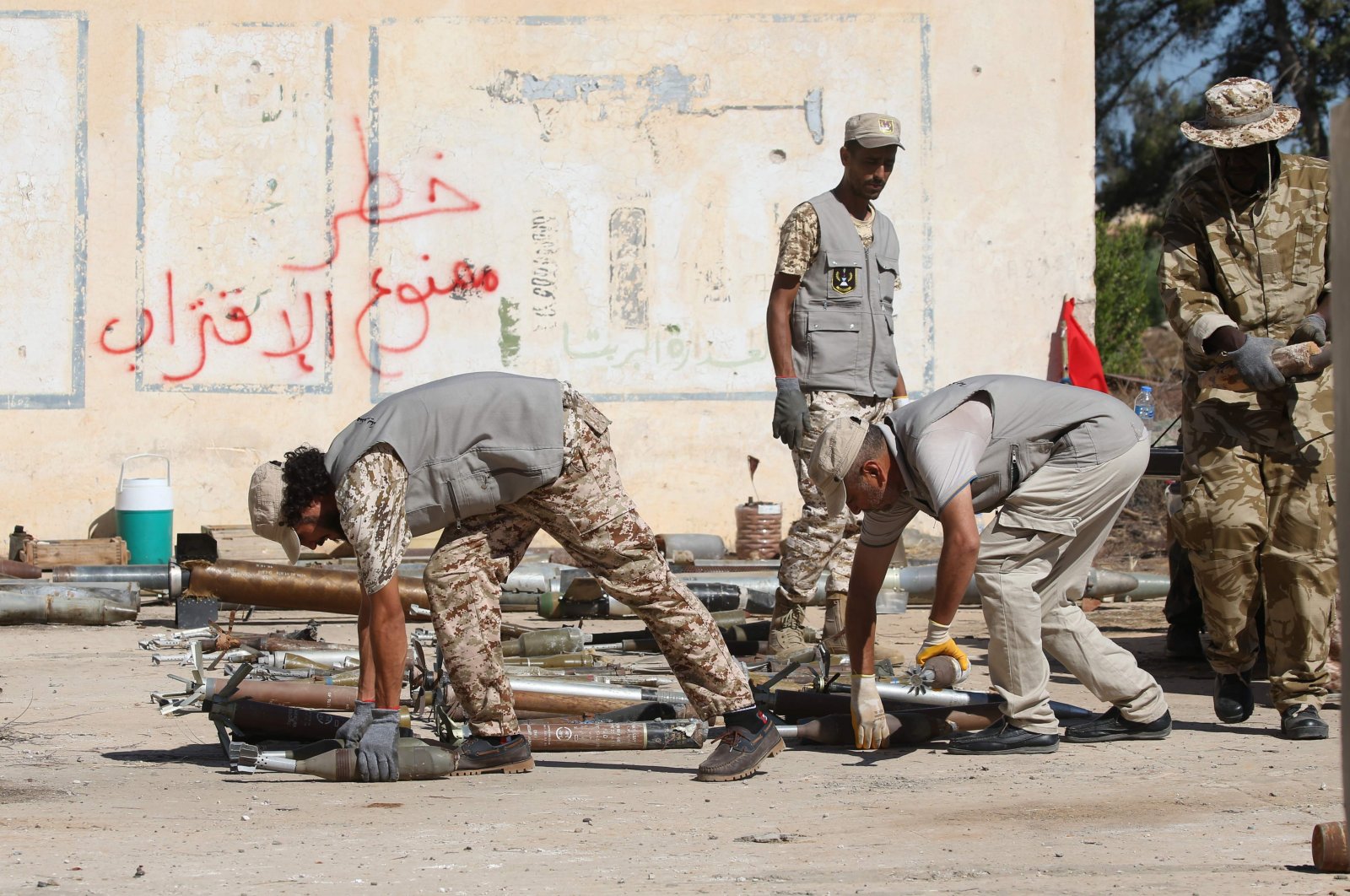 Military engineers sort ammunition and explosives, uncovered from areas south of the capital, ahead of disposing of them in the Libyan capital Tripoli, July 22, 2020. (AFP Photo)
by DAILY SABAH WITH AA Jul 26, 2020 11:52 am
RECOMMENDED

Libyan officials Saturday announced that they will launch an investigation into French author Bernard-Henri Levy's visit to the country.

The head of Libya's High Council of State Khalid al-Mishri asked for an investigation Saturday into the visit by the author who has close ties to Israel.

Al-Mishri said he was surprised by Levy's visit to the city of Misrata and called for an investigation to determine the authority that invited him into Libya.

The Libya High Council of State does not have any information about Levy's visit to Misrata, and no coordination has been made with regard to it, according to a statement by the communications office of the council.

All details and facts about the visit will be unveiled, and the government will initiate legal action against those who are involved in the illegal act, it said.

Authorities are advised by the high council to comply with its decisions about the issue, the statement added.

"The government has not officially invited any journalist to visit Libya," Bashagha said on Twitter.

He accused certain parties of fishing in the troubled water "to set political scores."

"A visit by a journalist without an official invitation from the government has no political overtone, and the public opinion has the absolute right to react to any public event," Bashagha said.

The visit by the Jewish writer, who is known for his staunch support of Israel, has triggered an uproar in Libya, amid calls for probing those who granted him a visa to enter the country.

For his part, Libyan Ambassador to France Hamed el-Houderi denied issuing a visa for the Jewish writer.

In March 2011, Levy engaged in talks with Libyan rebels in Benghazi and publicly promoted the international acknowledgment of the recently formed National Transitional Council, which was the de facto government of Libya for a period during the Libyan Civil War.

Later that month, worried about the 2011 war in Libya, he prompted and then supported former French President Nicolas Sarkozy's seeking to persuade Washington, and ultimately the United Nations, to intervene in Libya.

He is also known for his anti-Turkey stance. During the Gezi Protests of 2013, he targeted President Recep Tayyip Erdoğan, saying he should resign. During Turkey’s cross-border anti-terror operations in Syria, he once again criticized Turkey.

In 2014, he stayed in Ain al-Arab, also known as Kobani, for 10 days and supported YPG/PKK terrorists, saying an independent state would be established within two years.

In 2017, he was in Irbil to support and legitimize northern Iraq's Kurdistan Regional Government (KRG) leader Masoud Barzani amid the controversial independence referendum.

He also said, "Jews have a special obligation to support the Kurds," and that he hopes "they will come say to the peshmerga: 'For years now you have spilled your blood to defend the values of our shared civilization. Now it is our turn to defend your right to live freely and independently.'"

In another recent development in Libya, Libyan tribal chieftains said Saturday they will file a lawsuit against tribesmen who called for Egyptian military intervention in Libya.

"We announce the launch of lawsuits against (Libyan) citizens who claimed to represent the Libyan tribes and went to Egypt," reads a document signed by Libyan tribal chieftains.

They condemned "the behavior of the decision-makers in Egypt by receiving a group of Libyans who claimed to represent the tribes, but they, in fact, do not represent the will of the Libyan people.”

The chieftains said the behavior of the Egyptian leadership "was a blatant violation of international law and U.N. principles," going on to stress that those tribesmen "only represent the desires of the putschist criminal Khalifa Haftar.”

Signatories of the document include the elders of the Libyan cities of Zilten, Surman, Khoms, al-Ajaylat, Janzur, Souq al-Jum'aa along with the al-Sahel and al-Jabal Notables Councils.

In mid-July, Egyptian President Abdel Fattah el-Sissi met with a group of Libyan tribesmen, who said they have mandated the Egyptian military to intervene in Libya to "protect Libyan sovereignty.”

El-Sissi's call to arm the Libyan tribes in favor of Haftar against Libya's internationally recognized Government of National Accord (GNA) has drawn widespread criticism inside Libya.

The decision came a week after the Haftar-backed Tobruk parliament gave Egypt a green light to intervene militarily in Libya under the pretext of "protecting the national security" of both countries.

Since April 2019, Haftar's illegitimate forces have launched attacks on the Libyan capital of Tripoli and other parts of northwestern Libya, resulting in more than 1,000 deaths, including civilian women and children.

But the Libyan government has recently achieved significant victories, pushing Haftar's forces out of Tripoli and the strategic city of Tarhuna.

Muhammad Qanunu, the military spokesman of Libya's internationally recognized government, said Saturday that the Libyan Army’s operations will continue until the whole country is under the legitimate government's control.

The country's new government was founded in 2015 under a U.N.-led agreement, but efforts for a long-term political settlement failed due to a military offensive by Haftar, who has been backed internationally by Russia, France, Egypt and the United Arab Emirates (UAE).

Amid the ongoing conflict in the war-torn North African country, Turkey continues to conduct diplomatic efforts for establishing a sustainable peace and political solution in the region.

Turkey's Communications Directorate said in a statement that Erdoğan and Conte discussed regional developments, particularly in war-weary Libya, as well as cooperation in fighting COVID-19.

The leaders agreed to maintain dialogue for a political solution in Libya.