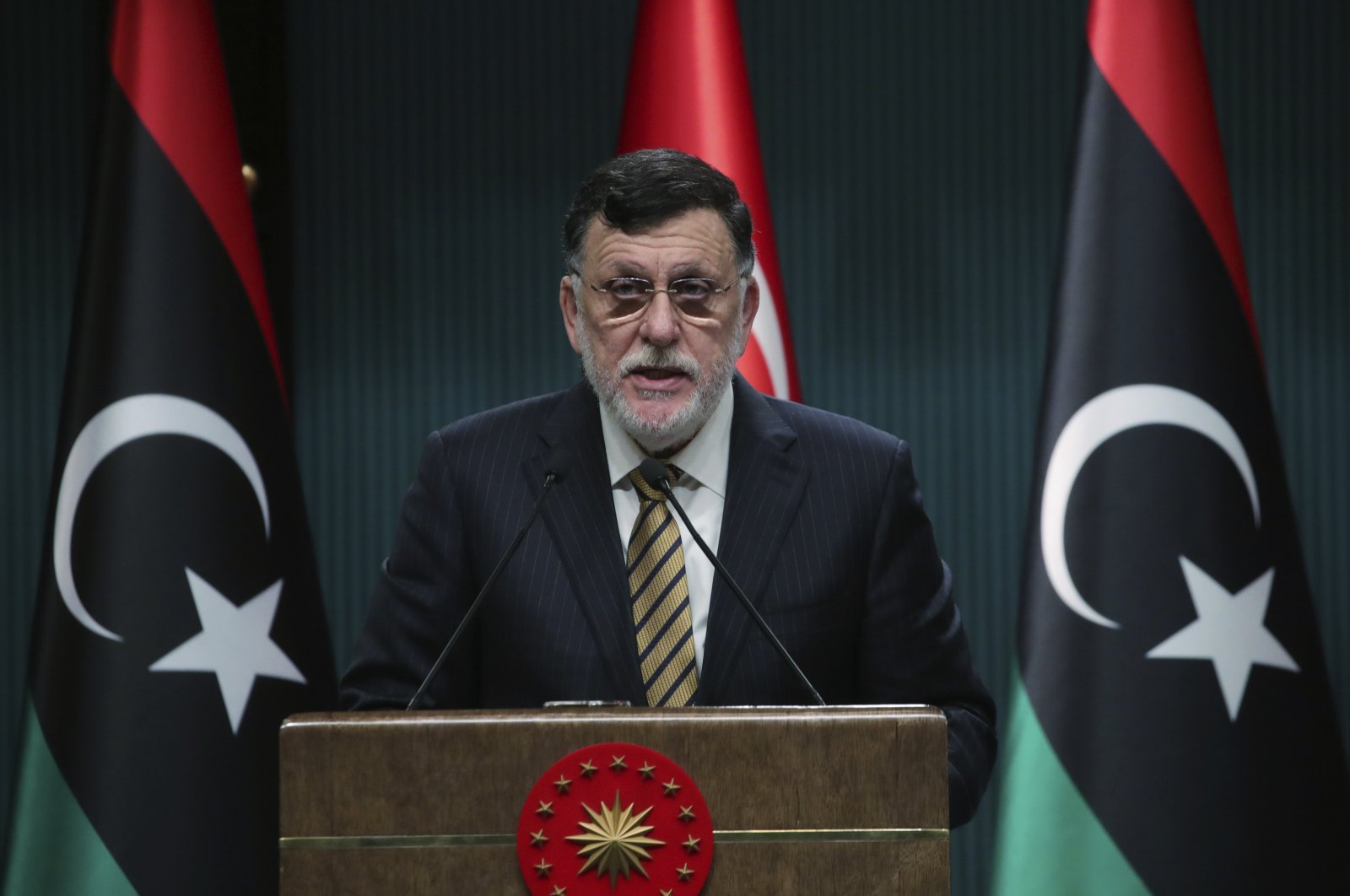 Libyan Prime Minister Fayez Sarraj announced late Monday the beginning of a Cabinet reshuffle amid protests in the capital.

Sarraj made the televised statement in conjunction with the outbreak of mass demonstrations in Tripoli against deteriorating living conditions and rampant corruption.

"I may have to declare an emergency in order to form a crisis government ... Urgent ministerial reshuffles will be made without the consent (of some groups) and quotas," he said.

"I will not allow (our) legitimacy to fall and for Libya to enter a dark tunnel," he added, acknowledging his governmental responsibilities before adding, "We do not have control of all the soil of the homeland."

Sarraj insisted on calling for presidential and parliamentary elections in March, saying: "The only political option to save the homeland is to reproduce power through elections."

The premier stressed that there were some parties that did not wish to hold elections to protect their own interests, but that "elections will end a lot of the power struggle in Libya."

On Friday, the Presidential Council of the internationally recognized Libyan Government of National Accord (GNA) and the Tobruk-based House of Representatives, which supports putschist Gen. Khalifa Haftar, agreed to an immediate cease-fire.

Their two statements were in accord on various issues, most notably the cease-fire and the holding of presidential and parliamentary elections.

The agreement was widely welcomed by the international community and particularly Arab countries, while Haftar's militias rejected the calls.

A five-nation Northwest African trade bloc, the Arab Maghreb Union, hailed the cease-fire deal Monday, saying, "The General Secretariat of the Council praises this agreement that we have always hoped for and motivated us to banish the specter of civil war and its repercussions on Libya's unity, sovereignty, stability and prosperity."

The council of the union – whose members include Algeria, Libya, Mauritania, Morocco and Tunisia – expressed hope that the agreement would be "a strong motivation to shape the contours of the new Libyan state, away from any foreign interference."

Sarraj declared his readiness to implement any agreement that meets the acceptance and consensus of all Libyan actors and called on Libyan protesters not to be dragged into calls for sabotage over the deterioration of living conditions, saying: "I have ordered all state agencies to protect the peaceful demonstrators."

He stressed that there were gunmen infiltrating the peaceful protests who carried out acts of sabotage and riots in order to bring down the prestige of the Libyan state.

Sarraj also called for the resumption of oil exports to fend off the hunger of the Libyan people.

Libya has remained beset by turmoil since the ouster of Moammar Gadhafi in 2011. Though the country's new government was founded in 2015 under a United Nations-led agreement, efforts for a long-term political settlement failed due to a military offensive by eastern-based putschist Gen. Haftar while the country has become a battleground for tribal militias, terrorists and mercenaries.

The war-weary country is plagued by water shortages and power blackouts that snuff out air conditioners in the searing summer heat.

The deplorable situation has been compounded by the coronavirus pandemic, which has depressed global oil prices and spread in the country despite social distancing measures.

Sarraj thanked the state of Turkey, saying Ankara had stood by Libyans “at a time when many abandoned us.”

On Nov. 27, 2019, Ankara and Tripoli signed two separate pacts: one on military cooperation and the other on maritime boundaries of countries in the Eastern Mediterranean. As part of the military deal, Turkey has sent advisers to help the Libyan Army defeat Haftar's militias.

“We are in communication with Turkey for the return of Turkish companies to complete their incomplete projects. We are trying to enhance our exclusive relations with Turkey in a manner that will benefit our institutions,” the prime minister added.

“Tripoli has a stronger position both at the table and in the field,” Presidential Spokesperson Ibrahim Kalın told Bloomberg in an interview Monday, speaking on the recent cease-fire announcement made by both eastern and western rivals.

The proposal, which came amid international pressure, has been seen as a breakthrough despite rising fears of a new escalation in the almost decadelong civil war.

For Sarraj, Sirte and Jufra must be demilitarised. Aguila Saleh Issa, speaker of the eastern-based House of Representatives and Haftar's ally, on the other hand, has made no mention of demilitarised zones but instead proposed the formation of a new presidential council to be based in Sirte.

“We’re not against the demilitarization of Sirte and Jufra in principle, this may be seriously evaluated. But there are key details on modalities, conditions regarding who will monitor them and how they will be implemented,” Kalın stated.

The presidential spokesperson further added that Sarraj's government sought to return the country to normal on condition that all sides returned to their positions before the signing of the 2015 Skhirat deal in order to maintain the cease-fire, reiterating Ankara's support.

Kalın continued that Haftar’s forces must withdraw from Sirte and Jufra and move back to Benghazi and Tobruk.

“Sirte and Jufra must be under the control of the central government, the oil must be processed for the use of all Libyans and the income should be collected by the Libyan central bank and distributed from there. Necessary steps for a political solution should also be taken simultaneously,” he said.

However, although the cease-fire has been agreed upon by Saleh, Haftar himself has rejected the idea, claiming that the GNA has been mobilizing to regain the strategic province of Sirte.

"The initiative that Sarraj signed is for media marketing," Ahmed al-Mosmari, a spokesman for Haftar’s forces, said during a briefing for journalists on Sunday: "There is a military buildup and the transfer of equipment taking place in order to target our forces in Sirte."

"If Sarraj wanted a cease-fire, he would have drawn his forces back, not advanced toward our units in Sirte," Mosmari added.

He also said Haftar’s forces were prepared to respond to any attempt to attack their bases in Sirte and Jufra, currently under their control.

Prior to the call for a cease-fire, fighting stalled around the central Mediterranean port of Sirte. The city serves as the gateway to Libya's eastern oil fields – earlier shut down by Haftar – as well as export terminals and the key Jufra air base to the south.