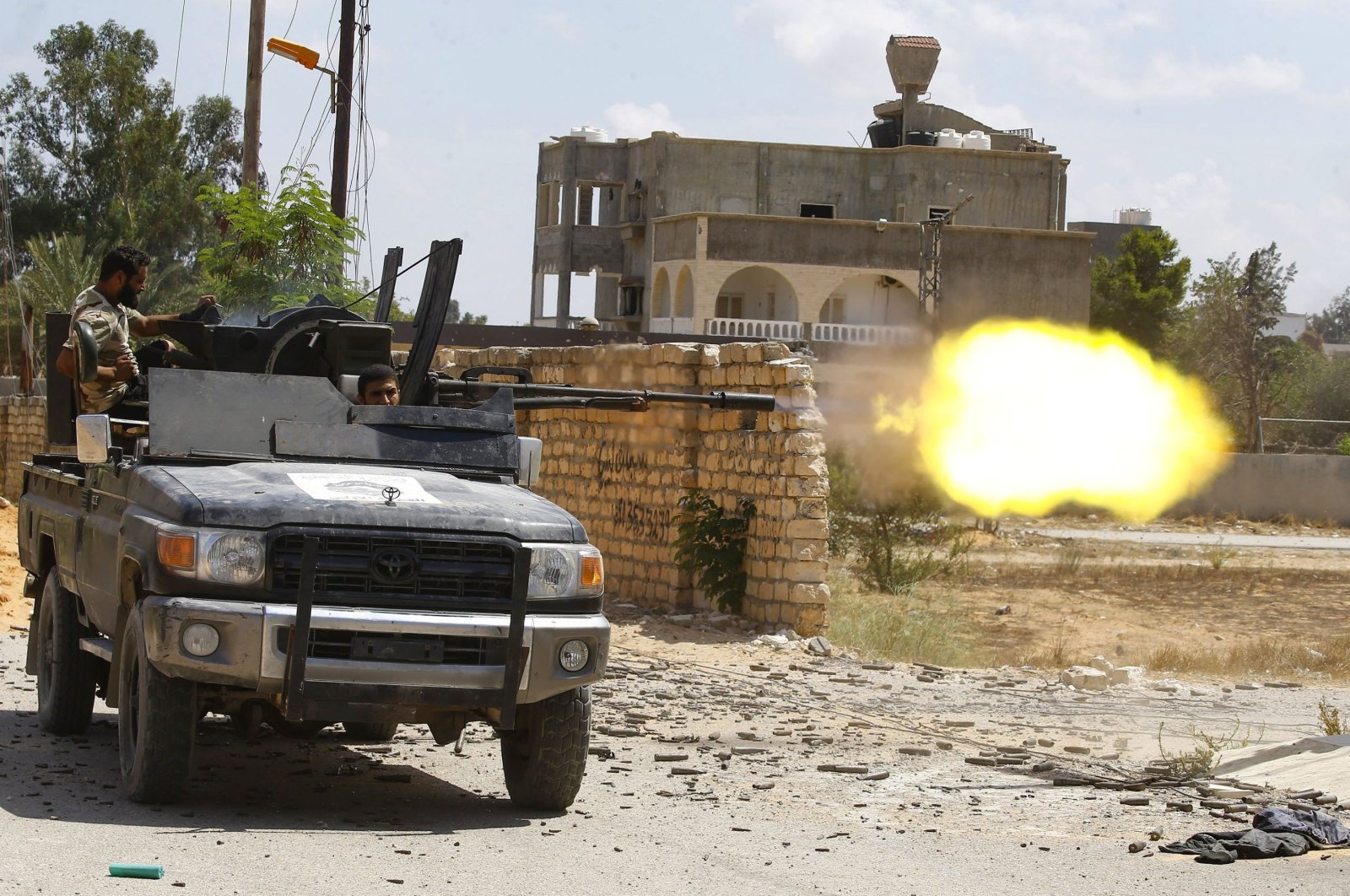 A fighter loyal to the internationally-recognized Libyan Government of National Accord (GNA) fires a truck-mounted gun during clashes with forces loyal to putschist Gen. Khalifa Haftar in the capital Tripoli's suburb of Ain Zara, Sept. 7, 2019. (AFP File Photo)
by Daily Sabah with AA Jun 06, 2021 3:44 pm

On the first anniversary of Tripoli's liberation from warlord Haftar, politicians from the UN-recognized GNA congratulated the nation, hailing the nation's sacrifices in repelling the attacks

Libyan politicians on Sunday celebrated the first anniversary of Tripoli's victory over the forces of putschist Gen. Khalifa Haftar.

In a congratulatory message, Libya’s High Council of State, headed by Khalid al-Mishri, thanked the countries, including Turkey, that backed the internationally-recognized government in its defense of the Libyan capital against Haftar’s 14-month-long attack, which was supported by the United Arab Emirates (UAE), Egypt, France and Russia.

“We are congratulating the honorable Libyan people on the anniversary of the repelling of the 14-month aggression,” the council said in the statement.

The statement also emphasized the agreements reached with Turkey. The council added that they are grateful to countries that participated in “real alliances and partnerships” with Libya’s United Nations-recognized government.

It further underlined that the country will keep its resolve against “all political conspiracies until stability reigns in Libya again.”

Fathi Bashagha, one of the favorites for the upcoming elections and a key figure in the Turkey-Libya strategic alliance, also congratulated the victory.

“We salute the heroes in various fields who combined their efforts to repel aggression and defeat (the Haftar forces). We wish God's mercy on our martyrs and regret the lives that were lost,” he said.

“Their legendary steadfastness and their victory for civil values represented a positive turning point in the march,” he added.

“We must continue on the path of political struggle, by rejecting tyranny, hegemonic groups and manifestations of corruption. We must also expel the mercenaries and hold elections on time, so that the state's prestige returns, its wealth is distributed fairly without discrimination, sovereignty is achieved and the popular will is renewed with integrity and transparency,” Bashagha said.

Saluting the ones that defended their “homeland and dignity against the barbarians wishing for a one-man, one-family rule,” Namroush also wished “Allah's mercy on the fallen Libyan soldiers,” and speedy recovery for those wounded.

“United Nations officials, U.N. Security Council, local and international human rights organizations and media confirmed all the realities that we have put forward,” he said.

On the other hand, Libyan Military Spokesperson Mohammed Kanunu also hailed the victory.

“We did not start this war but we are the ones that will define where and when it will end,” he said.

Libya has been mired in chaos since a NATO-backed uprising toppled and later killed longtime dictator Moammar Gadhafi in 2011. Afterward, the oil-rich country was long divided between a U.N.-supported government in the capital, Tripoli, and rival authorities based in the country’s east.

In the Libyan conflict, tensions escalated further when east-based forces, under warlord Haftar, launched an offensive in April 2019 trying to capture the legitimate government-held capital, Tripoli. Haftar’s campaign collapsed in June when forces backing the government, with Turkish support, gained the upper hand.

Selected through a U.N.-led process, Libya’s new unity government, the Government of National Unity (GNU), was sworn in on March 15. It is derived from two rival political groups that ruled the country's eastern and western regions, completing a smooth transition of power after a decade of violent chaos. Abdul Hamid Dbeibah will lead Libya to the Dec. 24 elections.