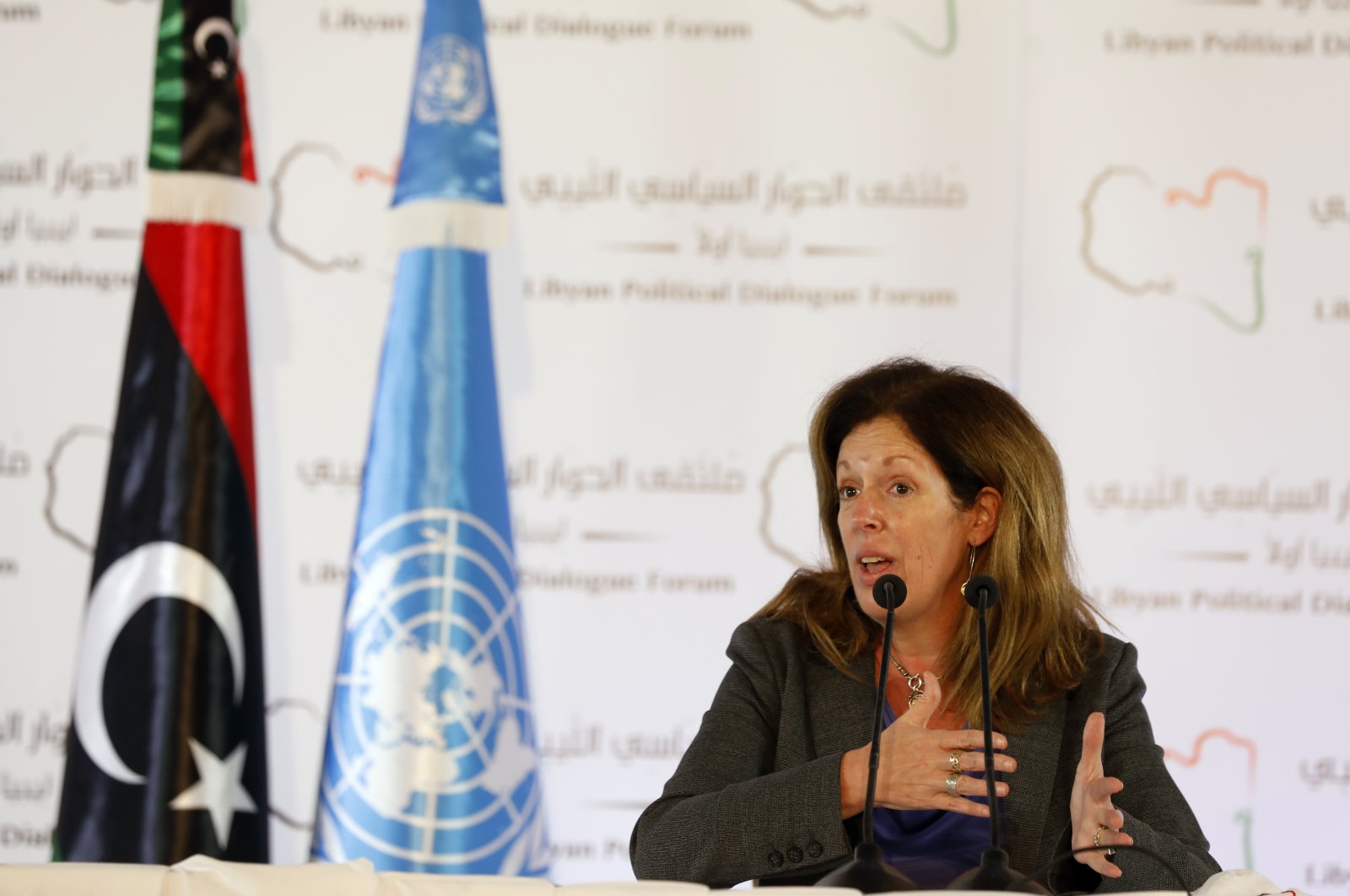 Stephanie Williams, the acting special representative of the United Nations secretary-general and head of the U.N. Support Mission in Libya, speaks during a news conference in Tunis, Tunisia, Nov. 15, 2020. (AP Photo)
by agencies Dec 03, 2020 8:40 am
RECOMMENDED

Twenty thousand foreign fighters and mercenaries remain in Libya despite a cease-fire and long-standing arms embargo, the United Nations envoy to the country said Wednesday, calling the situation a "shocking violation of Libyan sovereignty."

Forces loyal to the U.N.-recognized Government of National Accord (GNA) based in Tripoli and those of putschist Gen. Khalifa Haftar formally agreed to a cease-fire in October.

The agreement says all military units and armed groups must withdraw from the front lines while mercenaries and foreign fighters must leave Libyan territory within 90 days.

"There are now 20,000 foreign forces and/or mercenaries in your country. That is a shocking violation of Libyan sovereignty," the United Nation's interim Libya envoy Stephanie Williams told a virtual meeting of a political dialogue forum.

"There are now 10 military bases in your country ... that are today either fully or partially occupied by foreign forces," she added.

"They are now occupying your house. This is a blatant violation of the arms embargo ... They are pouring weapons into your country, a country which does not need more weapons," Williams said.

Haftar, supported by Russia, the United Arab Emirates (UAE) and Egypt, launched an offensive on Tripoli in April 2019 but was pushed back earlier this year as pro-GNA forces received key military support from Turkey.

The latest round of the U.N.-sponsored political dialogue forum is taking place virtually, after a first in-person session in the Tunisian capital last month.

The GNA in November accused the Wagner Group, a Russian paramilitary organization backing Haftar, of preventing its delegation at the Sirte talks from landing at the nearby Qardabiya air base.

The shadowy Russian military contractor, reputed to be close to the Kremlin, has been accused of numerous violations in Libya.

The GNA military command also cited live-fire exercises by pro-Haftar forces in the area and said people from Haftar's "inner circle" were managing the meetings.

The forum is part of a push to end almost a decade of violence in the North African country.

At the Tunis meeting, delegates agreed to hold elections on Dec. 24, 2021, but not on who would lead the political transition.

According to previous media reports, the Wagner Group has brought over 1,000 troops to Libya, including Russian pilots who trained troops loyal to Haftar. There were also reports of Russian Sukhoi-22 warplanes flying over Libya.

The mercenaries previously had field experience in Ukraine and are now fighting in Libya, according to the media reports.

Foreign fighters and guards, including many from Sudan, have also been used in Libya. A U.N. report on Sudan released in January also said many Arabs from the war-weary region of Darfur were fighting as "individual mercenaries" alongside warring Libyan parties.

For instance, around 270 Sudanese workers, lured by the promise of employment in the UAE, were brought to war-ravaged Libya to fight alongside Haftar instead, the Human Rights Watch (HRW) said in November.