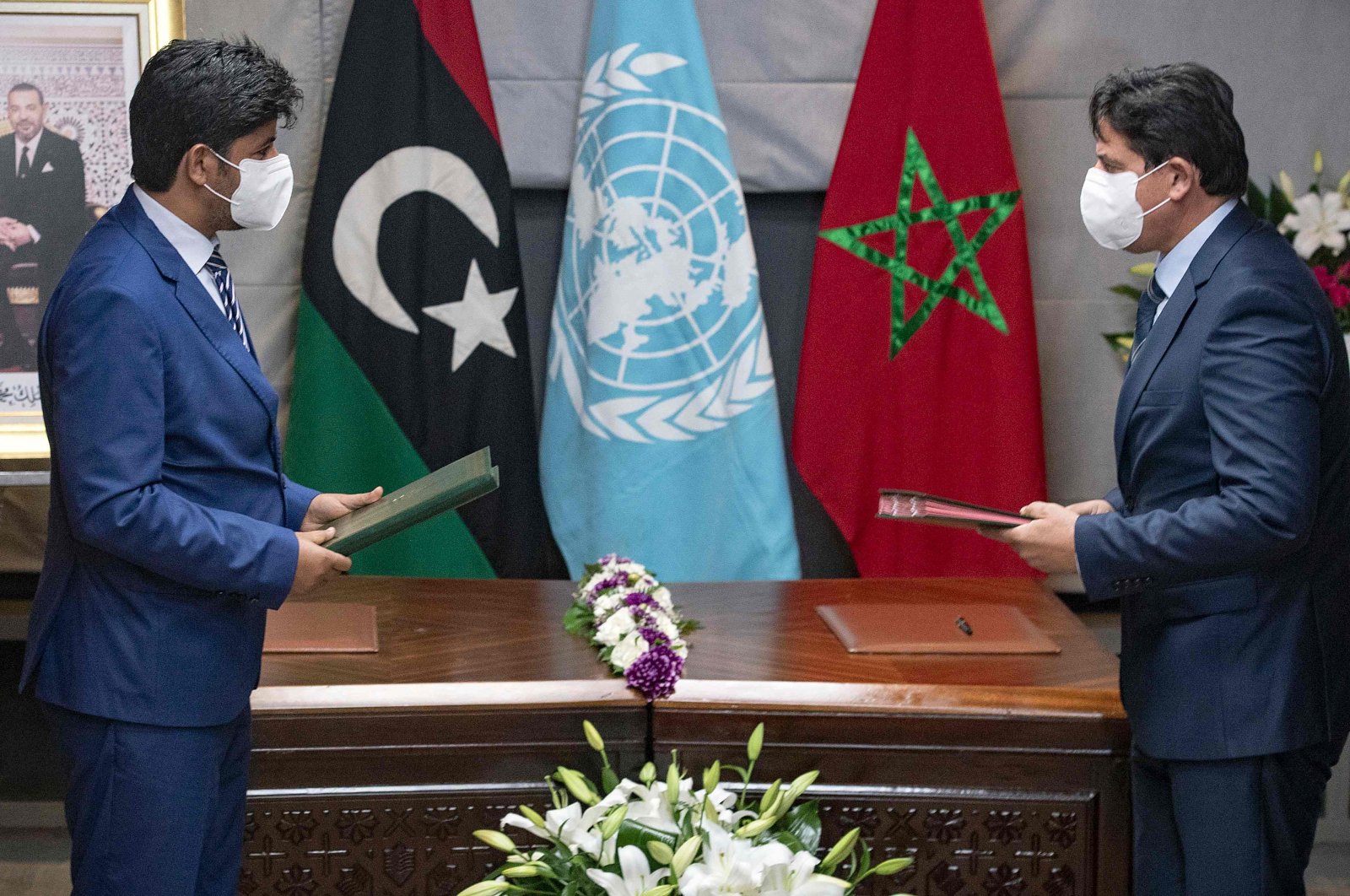 Representatives of Libya's rival administrations take part in a meeting in the coastal Moroccan town of Temara, on Oct. 6, 2020. (AFP Photo)
by DAILY SABAH Oct 07, 2020 10:34 am
RECOMMENDED

The delegations of the Libyan Supreme Council of State and the Tobruk-based House of Representatives signed a draft agreement on the criteria for appointments for positions of sovereignty on Tuesday.

According to Anadolu Agency (AA), the signing ceremony took place after the second round of talks held in Morocco wrapped up.

Tuesday's agreement is related to the implementation of Article 15 of the Skhirat Agreement which was signed on Dec. 17, 2015, in Morocco.

The article indicates in its first paragraph that "the House of Representatives consults with the State Council (...) to reach consensus on the occupants of the leadership positions of the following sovereign positions: Governor of the Central Bank of Libya, Head of the Audit Bureau, Head of the Administrative Control Authority, Head of the Anti-Corruption Authority, President and members The High Electoral Commission, the President of the Supreme Court, and the Attorney General."

The second paragraph of the article stipulates that approval of two-thirds of the House of Representatives is required for appointments.

Due to the great division in the country between east and west, most of these sovereign institutions, if not all, have become divided, with two heads.

However, other nonsovereign institutions that could be subject to the same appointment mechanisms include the National Oil Corporation (NOC) and the Libyan Investment Corporation, given their economic and financial weight and the intense competition over them.

Diplomatic efforts have intensified since Fayez Sarraj, head of the United Nations-recognized government based in the capital Tripoli, and Aguila Saleh Issa, speaker of the eastern-based parliament backed by putschist Gen. Khalifa Haftar, each announced a cease-fire in August. The leaders, in separate statements, said they wanted to end the fighting and hold elections.

The move was welcomed by the international community and seen by the U.N. as a chance to pave the way for peace and stability in the region.

Diplomats met Monday for a digital follow-up to this year's Berlin conference on Libya, with U.N. Secretary-General Antonio Guterres attending the talks.

The secretary-general highlighted how recent developments represent a rare opportunity to restore peace in Libya. He stressed that the future of Libya and of the entire region is at stake. He called on all Libyans to act constructively and responsibly to reach a political solution, as well as on the members of the international community to fully shoulder their responsibilities to promote an inclusive political solution.

Two days of talks between representatives of Libya's rival administrations that took place in Egypt in late September paved the way for further face-to-face discussions while talks in Morocco in the same month led rival parties to agree on the criteria for appointments to their country's key institutions.

Parallel to the Morocco talks, "consultations" took place in Montreux, Switzerland in September between Libyan stakeholders and members of the United Nations Support Mission in Libya (UNSMIL), said Stephanie Williams, the U.N.'s interim envoy to Libya.

The Government of National Accord (GNA) was founded in 2015 under a U.N.-led agreement. Unfortunately, efforts for a long-term political settlement have failed due to a military offensive by forces loyal to Haftar, who is backed by Egypt, France, the United Arab Emirates (UAE) and Russia.