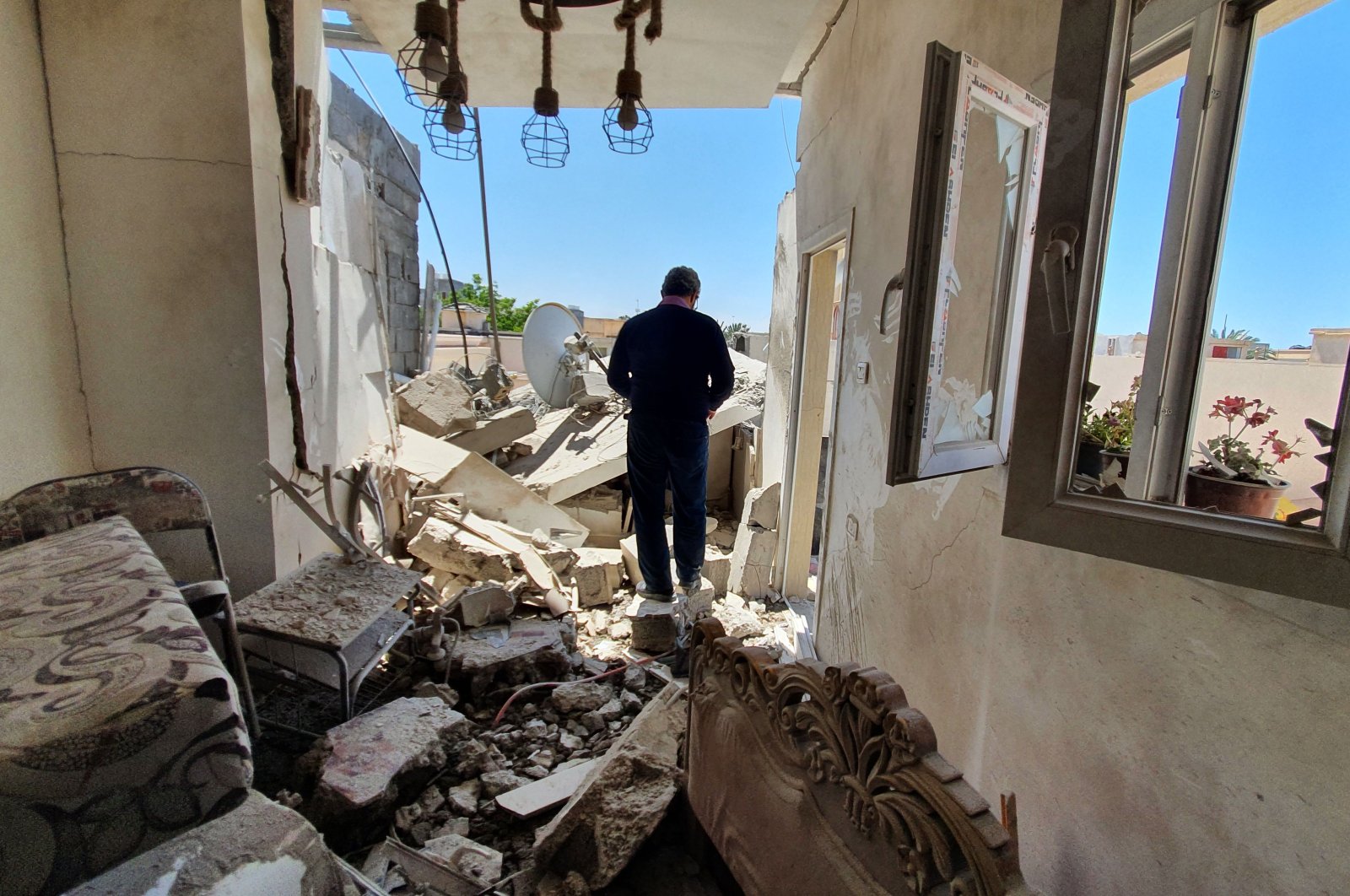 A resident walks amidst the rubble of a building that was damaged when forces loyal to putschist Gen. Khalifa Haftar shelled the residential neighborhood of Znatah in the Libyan capital Tripoli, held by the U.N.-recognized Government of National Accord (GNA), May 1, 2020. (AFP)
by DAILY SABAH WITH AA May 03, 2020 11:19 am
RECOMMENDED

Despite the ongoing coronavirus pandemic, the U.N.-backed government continues to advance against the militias of warlord Gen. Khalifa Haftar, particularly in wiping out the putschists' armories and oil tankers and wins increasing support from local communities every day.

The army of the U.N.-recognized Government of National Accord (GNA) on Saturday attacked armories belonging to Haftar's militias, according to the country's military. The military said the army conducted an airstrike on Watiya airbase, east of Tripoli. Two militia members were killed and five were injured, it added.

Col. Muhammad Kununu, a spokesman for the government's armed forces, said in a written statement that the army conducted an airstrike on the Nesme region, 200 kilometers (124 miles) south of the capital Tripoli.

The second strike hit another oil tanker en route to Tarhuna city to reach Haftar's militia, according to a written statement by the press center of the GNA's Burkan al-Ghadab (Volcano of Rage) operation

Tarhuna is a major focal point for Haftar's militias in their onslaught against Tripoli as well as for their supply lines from the Al-Jufra airbase.

The Libyan Army has recently made gains against Haftar's militias, which are supported by France, Russia, the United Arab Emirates and Egypt.

The Libyan air force also targeted the transport of Haftar-affiliated Janjaweed militia who were preparing to attack.

The army carried out an airstrike on the Nesme region, 200 kilometers (124 miles) south of the capital Tripoli, said a statement by the Libyan army-led Operation Rage of Volcano.

In addition to the killing of the Sudanese militants, three armed vehicles were also destroyed, it added.

In a report published Saturday, Anadolu Agency (AA) documented the presence of mercenaries in Libya from neighboring Sudan fighting for Haftar.

Meanwhile, the military council of Murzuq city announced Saturday its support for the GNA.

The military council of Murzuq, located 953 kilometers (592 miles) south of the capital Tripoli, released a statement via video message on Saturday night.

The statement also congratulated the Libyan government over recent military gains in western Libya thanks to its Operation Volcano of Rage.

The announcement came after the city of Sebha, 750 kilometers (466 miles) south of Tripoli, announced support for the Libyan government on April, 30.

The GNA took control of the two fronts early Friday in the south of the capital Tripoli. "Our forces made progress on the Mashru and Hallatat fronts and took a large area under control," Mustafa al-Majai, spokesman for the Volcano of Rage operation, told Anadolu Agency (AA), adding that the areas had been out of their control for three months. He said they had also taken the Hamza camp in the south of Tripoli.

The people of southwestern Sabha, on the other side, in a joint statement declared their withdrawal of support for warlord Haftar and announced their support of the legitimate government late Thursday.

Following the ouster of late dictator Moammar Gadhafi in 2011, Libya's government was founded in 2015 under a U.N.-led political deal. Since April 2019, the government has been under attack by Haftar's forces, based in eastern Libya, and more than 1,000 people have been killed in the violence.

Libyan government troops have been under attack by Haftar's militias since last April, and international efforts to enforce a cease-fire have proven unsuccessful. The aggression has intensified in the last few months as forces loyal to Haftar have killed civilians almost daily. They have also not refrained from attacking Tripoli’s hospitals, vital for the Libyan people fighting the coronavirus outbreak. The U.N. has urged Haftar’s forces several times to halt assaults on hospitals at a time when they are most needed, yet the calls have largely been ignored. The U.N. condemned the attacks as a “clear violation of international law.”

The killing of three civilians, including two women, near Libya's capital by Haftar's militias was caught on camera.

The Libyan Army on Saturday released footage from closed-circuit street cameras showing Haftar militias' attack on a civilian settlement in the Zenata region, south of the capital Tripoli.

The video shows three people walking on the road and falling from an explosion, with debris scattered around and tree branches on the ground.

Despite declaring a cease-fire, just days later, Haftar's forces attacked civilian settlements south of Tripoli on May 1. Three civilians lost their lives in the rocket attack, according to medical sources.

After unilaterally declaring himself ruler of Libya on April 27, Haftar announced a cease-fire for the rest of the Islamic holy month of Ramadan, a few days later. The announcement came after the military balance had started to shift this month toward the advantage of the GNA, as the Tripoli government recaptured the country’s western coastline. Haftar and his supporters caused the failure of past cease-fire attempts, which have destroyed trust on the ground and have used the global coronavirus pandemic to escalate their Tripoli siege.

However, according to the pro-Haftar parliament speaker, Haftar actually announced a truce upon the "command of Russia" as he suffered great losses against the U.N.-recognized Libyan government.

Discussions between the Libyan House of Representatives Speaker Aguila Saleh and tribal leaders in eastern Libya were aired on social media, where Saleh said Russia, the international supporter of Haftar, prepared a report on the situation on the ground.

According to this report, Haftar militias were in a tough situation in the face of the Libyan army, Saleh said, and the militia in Tarhuna, southeast of Tripoli, was "like on the edge of the cliff" as the refueling supply sent for Haftar militia was hit from the air.

He said the report also included that the internal war will evolve into a new phase against the Haftar militia, and added: "Russians wanted Haftar to declare a cease-fire as the situation in clashing zones was getting worse."

"According to Russia's report, (it will be) in the meantime, maybe this week, it will be certain at the United Nations that the Libyan government is the legitimate representative of the country," he said.

The U.N.-sponsored peace talks between the two parties in February ended without reaching an outcome. Three tracks were determined in the application of the Berlin conference's conclusions reached on Jan. 19. The first one was the military track, which brought together five senior military officers from Haftar's so-called Libyan National Army and five representatives aligned with the internationally recognized GNA. The second track, was an economic and financial track, while the third was political.

Meanwhile, U.S. ambassador to Libya Richard Norland and Saleh discussed Friday that the future of the country should not be shaped at gunpoint.

Norland and Saleh, held a telephone discussion about the latest developments in the region, according to the statement on the Facebook page of the U.S. Embassy in Tripoli.

Saleh highlighted the importance of common and constructive communication between Libya and the U.S., and said it is time for clashes among Libyans to end.

Norland noted the importance of the fight against terrorism and said armed conflict should end to not allow terror groups to form again.

There are signs of a split in Libya between Haftar and forces supporting him.

Ashraf al-Mayar, commander of the unit that supports militias loyal to the eastern Libyan coup plotter, announced his loyalty to Saleh in a video posted on social media.

Stating the House, represented by Saleh, is governing the country, Mayar signaled he is not standing with Haftar.

"It is not acceptable to oppose Aguila Saleh in any way," he said, adding that opposing him is a "betrayal."

When Haftar declared last week that he was the ruler of Libya, it was perceived as a move to eliminate Saleh.

Haftar claimed he "accepted the mandate of the Libyan people" and termed the 2015 U.N.-brokered Skhirat agreement for a unified government "a thing of the past."

But this coup attempt by Haftar was condemned by the international actors and regional allies.

Notably, although Haftar's spokesman said a unilateral cease-fire was announced, forces affiliated with the renegade commander struck southern Tripoli with rocket launchers only a couple of hours ahead of the announcement.