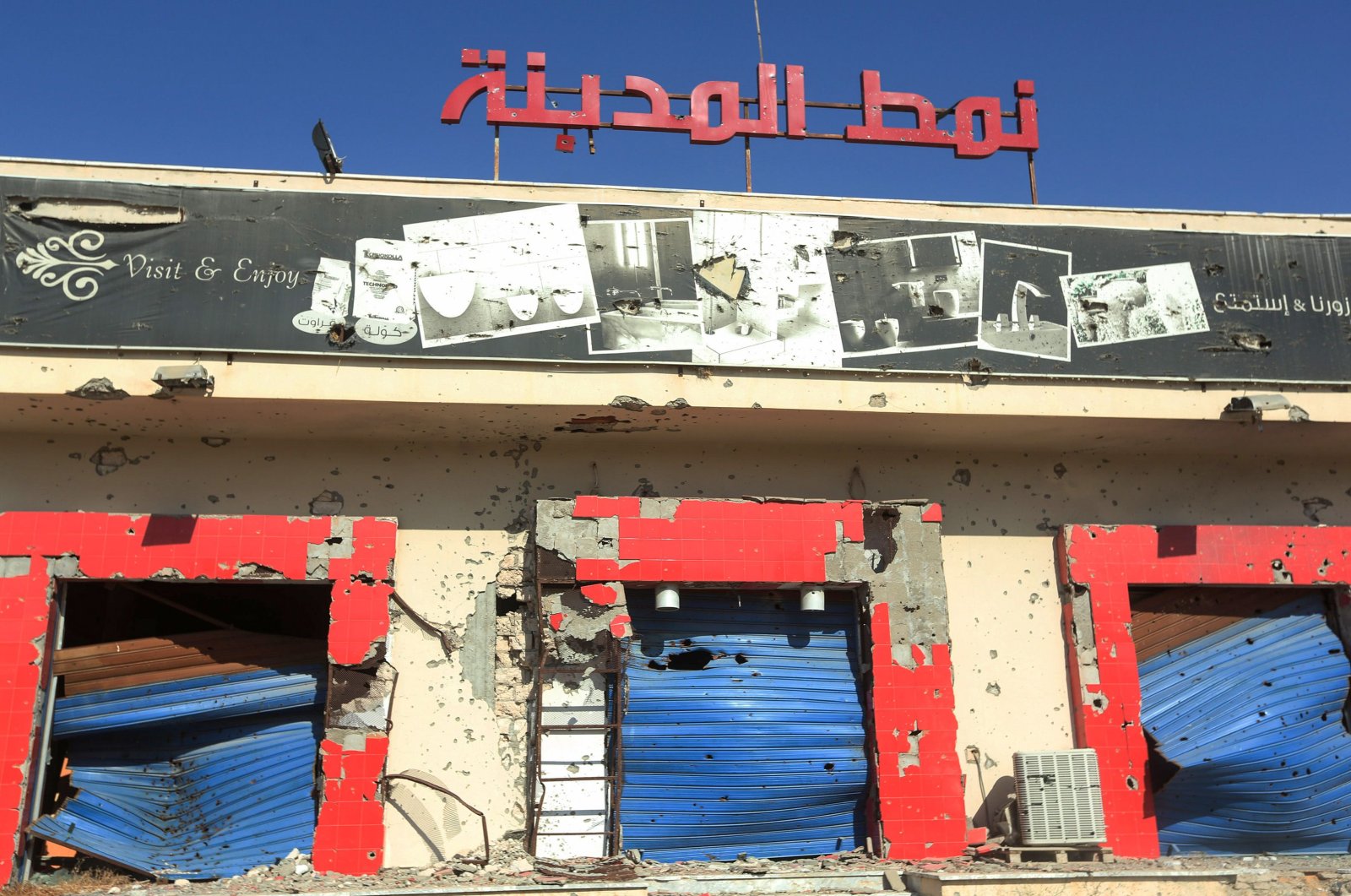 A shop, damaged during the 14 months of fighting between the U.N.-recognized Government of National Union (GNA) and putschist Gen. Khalifa Haftar, in a southern neighborhood in the capital Tripoli, July 9, 2020. (AFP Photo)
by DAILY SABAH WITH AGENCIES Jul 17, 2020 1:39 pm
RECOMMENDED

Libyan Interior Minister Fathi Bashagha said on Twitter Friday that his country would not accept steps "to undermine (Libyan) sovereignty or bypass the legitimate government."

"The leadership in our brothers in Egypt must realize that their interest is with the legitimate government in Libya," Bashagha added.

Egypt's President Abdel-Fattah el-Sissi met on Thursday with the heads of Libyan tribes in his country's capital Cairo, warning that Egypt would "not stand idle" in the face of increasing military mobilization near the city of Sirte in the north of Libya.

His comments came days after the eastern-based Libyan parliament, aligned with putschist Gen. Khalifa Haftar, voiced tacit support for the possibility of Egyptian military intervention in the country.

El-Sissi said Egypt would "not stand idle in the face of any moves that pose a direct threat to the national security not only of Egypt but also that of Libya" and the region, according to a presidency statement.

The tribal leaders "declared that they fully authorize the president and the Egyptian armed forces to intervene to protect Libyan sovereignty," the statement added.

"El-Sissi's talk is a repeat of previous statements that constitute blatant interference in Libyan affairs," he said, adding that the speech was "not aimed at peace, as he claims, as it is he who is fueling the (Libyan) conflict."

The Libyan High Council of State also condemned el-Sissi's call to arm the Libyan tribes, saying it would lead to more fighting and division in the country.

El-Sissi said the capture of the city of Sirte and the Jufra air base by the U.N.-recognized Government of National Accord (GNA) would count as a "red line" for Cairo, calling on Egypt's army to "be prepared to carry out any domestic or cross-border missions. The region is currently held by Haftar, who is mainly supported by Egypt, the United Arab Emirates (UAE) and Russia, while Turkey backs the GNA.

The GNA, which has been pushing to wrestle the strategic city from Haftar, denounced el-Sissi's statements as a "declaration of war." Ankara and the GNA have called on Haftar to withdraw from Sirte and negotiate a cease-fire.

In June, Cairo proposed a peace initiative calling for a cease-fire, withdrawal of mercenaries and the disbanding militias in the neighboring country. The GNA and Ankara dismissed the plan, which el-Sissi unveiled with Haftar at his side.

While Libya has been mired in chaos since the 2011 uprising that toppled and later killed longtime dictator Moammar Gadhafi, since 2015, a power struggle has pitted the Tripoli-based GNA against forces loyal to Haftar, who is based in eastern Benghazi.

Since April 2019, Haftar's illegitimate forces have launched attacks on Tripoli and other parts of northwestern Libya, resulting in more than 1,000 deaths, many of them civilians.